I have added this section of the website in an attempt to demystify the elements of pub buildings that make you go "cor look at that!" You know the sort of thing - the ornate brickwork and tiles, the decorative wood and glass, the work of designers, architects, engineers and skilled crafts workers. I am no aesthete, simply an enthusiastic amateur. However, I will do my best to explain some architectural features you may encounter on your travels.

A Basket-Handle Arch, sometimes referred to as Anse de Penier, is a three-centred arch having a crown with a radius much greater than that of the outer pair of curves.

This example of a Basket-Handle Arch was photographed at the Three Crowns at Hill Top. Such a three-centred arch is somewhat flattened providing the effect of a false ellipse. 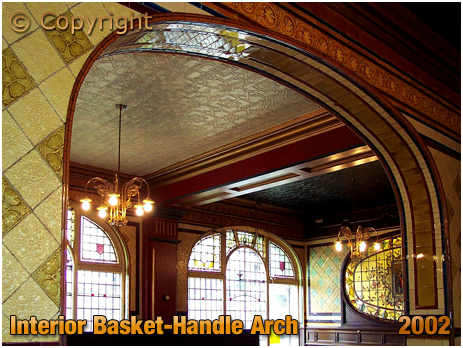 Many of the examples I have seen of a Basket-Handle Arch are deployed in the windows of a tavern. Here one can see a walk-through version inside the Barton's Arms at Aston. However, this was a conversion of an interior window display, the glass of which can be seen in the background as a wall panel. I would think that a joist is used above this arch as this is a load-bearing wall.

Derived from the Latin word corvus, Corbels come in many shapes and sizes and can be functional or decorative. These days decorative corbels can be made with materials such as polyurethane rather than stone. 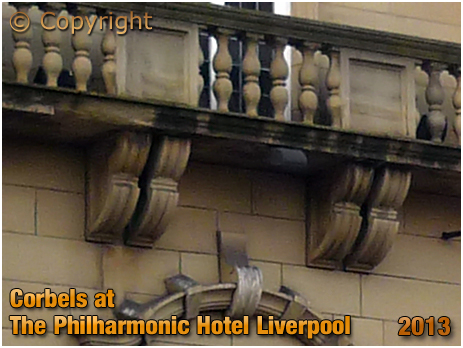 Here one can see four corbels, part of a set providing the support for the balustrade on the Philharmonic Hotel at Liverpool. These are acting as a support for the weight above in that they are jutting from the wall to carry the superincumbent weight. These are quite chunky corbels. Smaller examples could be used to support a shelf, projecting window or roof overhang. 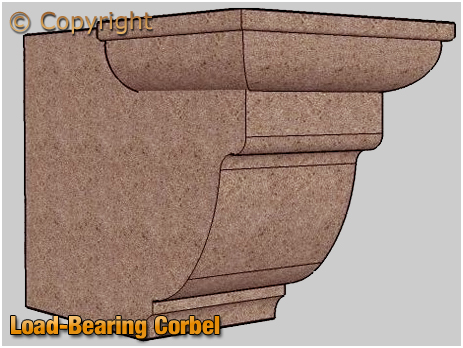 In most cases it is not possible to see the entire block of stone used within the wall of a structure. In this diagram the rear third of the corbel would be embedded within the wall so that the projecting element can support the weight above. This example is a basic or unadorned corbel. If the budget allows, a more decorative corbel can be deployed. Some are particularly ostentatious. 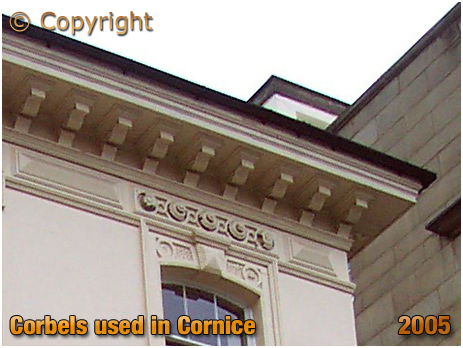 Acting as support for the projecting roof, this type of corbel is widespread in the UK. Each individual corbel offers a small amount of support, but combined with a whole row, can accommodate the weight of the projection. Used in this way, they add an attractive element to the cornice. This example is the Wellington on Bennett's Hill in Birmingham. 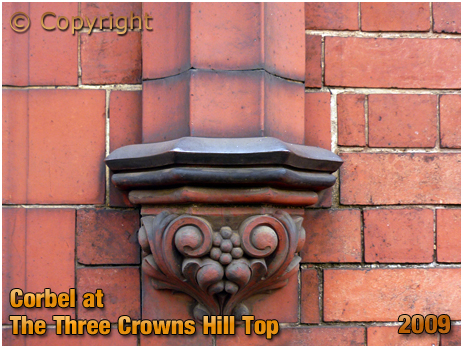 This type of corbel is helping to support the weight of a projecting arch of terracotta decoration on the Three Crowns at Hill Top. Mass production of terracotta in the late 19th century allowed for machined decoration at a fraction of the cost of the stonemason. 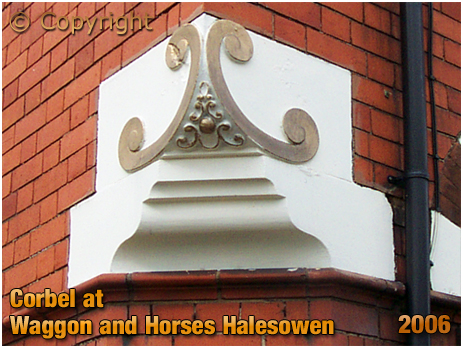 This stone corbel was deployed on the Waggon and Horses at Halesowen and, although the corbel is supporting the weight of the brickwork above, it was partially to add a little character to a regular rectangular brick building. However, compare this to the diagram above and one will appreciated the size of the block, much of which cannot be seen. 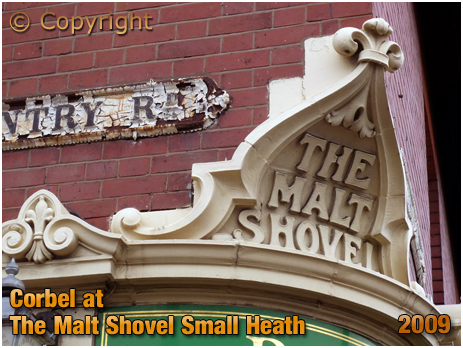 This is a particularly attractive corbel that incorporates the name of the tavern, the Malt Shovel at Small Heath. The stepped stone that is doing the hard work of supporting the brickwork above can be seen behind the decoration. 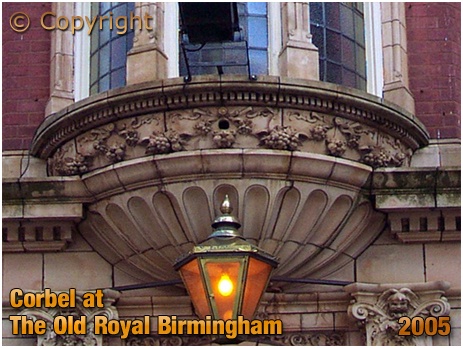 This type of corbel is doing a lot of work as it is supporting a large oriel window at the Old Royal in Birmingham. Indeed, this is the base of two windows on two floors, all part of a tourelle, so one can imagine how much stress this corbel is experiencing. I suspect that steel has been used behind the stonework to assist with load-bearing.

Fenestration is an arrangement of windows in a building. Indeed, the term is derived from fenestra, the Latin word for window. Strictly speaking, in the world of architectural design, fenestration relates to the design and arrangement of all openings in a building's envelope. However, I generally refer to this when discussing a late Victorian build or, indeed, an improvement scheme where the building's frontage is dominated by a glass arrangement. The photograph below shows an excellent example of this - not a brick in sight! 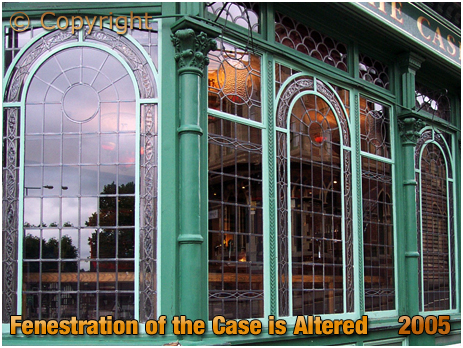 This created a highly opaque interface between the pub's interior and the world outside. Advances in design and improvements in glass resulted in rows of windows becoming a fashionable feature. In older buildings this was achieved by inserting steel supports, demolishing the old walls and inserting large plate-glass windows between thin facing pilasters. 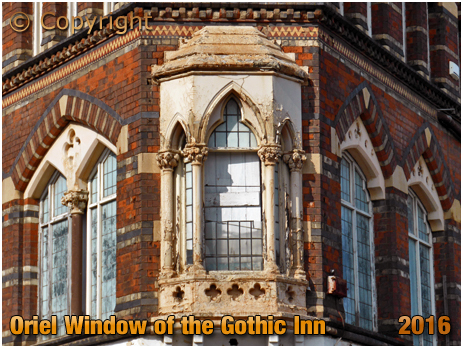 Oriel window's work particularly well on corners, allowing more light into a room. This example at the former Gothic Inn at Hockley uses stiff leaf capped shafts to complement other windows of the building. This was possibly the manager's office for the Gothic Works.

Polychrome brickwork deploys bricks of different colours in order to create decorative patterns amid the walls of a structure. In the UK it was first used in the late Gothic period. Consequently, the style became popular during the architectural Gothic Revival of the mid-19th century. The style continued in use, though on a lesser scale, following the mass production of terracotta and stone as dominant materials. 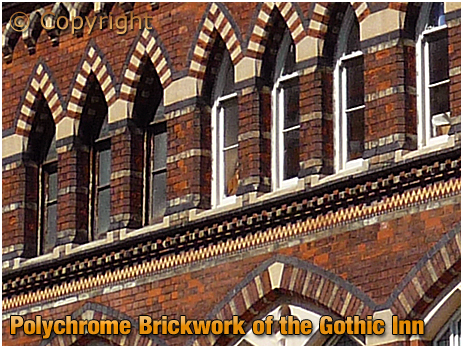 The Polychrome brickwork seen here on the Gothic Inn forms much of the exterior brick during a period when the style was at the height of its popularity. The use of brick was also a cheaper form of decoration during this period. Flamboyance on a budget if you like.

Not to be confused with a tower, a turret is smaller version of a tower that generally projects vertically from the wall of a building. Their use was widespread with the design of medieval castles as they afforded a defensive position in which the defenders of the fortification could fire along the adjacent walls. Like castles themselves, their use became obsolete as a defence. However, such buildings continued to use them for decoration. 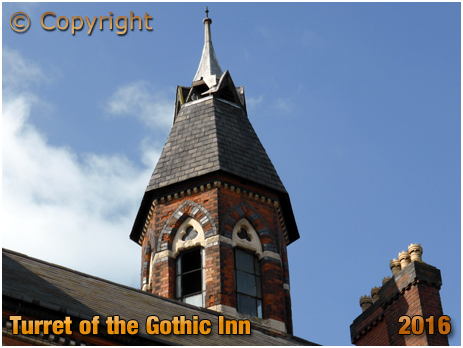 The word derives from the Italian torretta, meaning little tower. A turret is topped by a variety of styles, perhaps circular, others with crenelations, or as seen here at the Gothic Inn in Hockley, an octagonal roof incorporating gablets and a leaded finial.