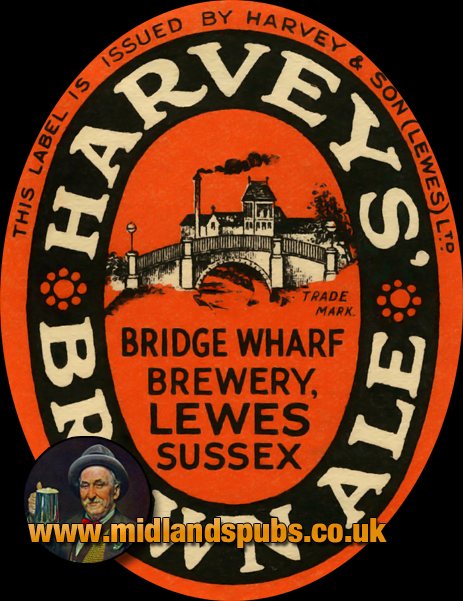 An interesting beer label for Harvey's Brown Ale for it shows the bridge and brewery at Lewes in Sussex. The Bridge Wharf Brewery was founded in 1790 by the wine merchant John Harvey. At first, he actually brewed opposite the current brewery site at a time when he shared the plant with another brewer called Thomas Wood. It was in 1838 that John Harvey erected an eight quarter brewhouse on the current Bridge Wharf site, on land purchased for the sum of £3,707. The business was co-managed with his three sons. Henry Harvey was the main brewer who produced stout, ale and porter. The supervision of brewing was taken over by Henry Titlow-Barrett, who had previously worked at Marlow for Thomas Wethered & Sons Ltd. The new brewer also administered the construction of a new tower brewery. Designed by William Bradford, it is this Victorian Gothic brewhouse that is illustrated on this beer label. It is colloquially known as the Lewes Cathedral. The company enjoyed considerable success in the post-war years when Anthony A. Jenner was the head brewer. He was the man who scooped prizes for the brewery with their Old Ale and, more notably, for the Best Bitter first produced in 1955. Production capacity was increased from 25,000 to 50,000 barrels a year in 1984 when a second brewery was attached to the Victorian buildings. However, the company took great care to ensure the new addition matched the Gothic style. In 2010 the brewery, which has remained independent throughout its history, was still being run by the Harvey family. 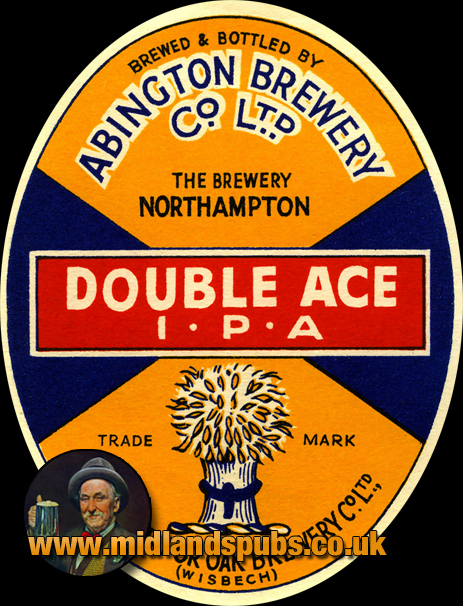 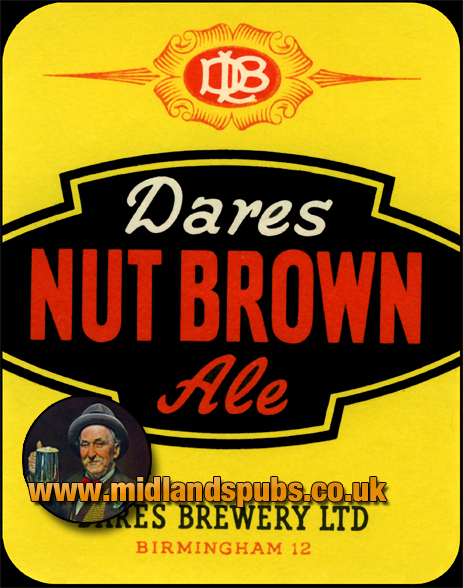 A beer label for Dare's Nut Brown Ale. This company was located at the Southend Brewery on Belgrave Road in the Highgate area of Birmingham. The origins of William Dare & Son, a family-owned company, goes back to the 19th century, though they only registered as Dare's Brewery Ltd. in August 1927. In addition to producing their own beers, Dare's had a bottling plant which was once used by Worthington's. The Southend Brewery was eventually acquired by Davenport's in 1961 by which time the firm had a tied estate of 30 pubs. 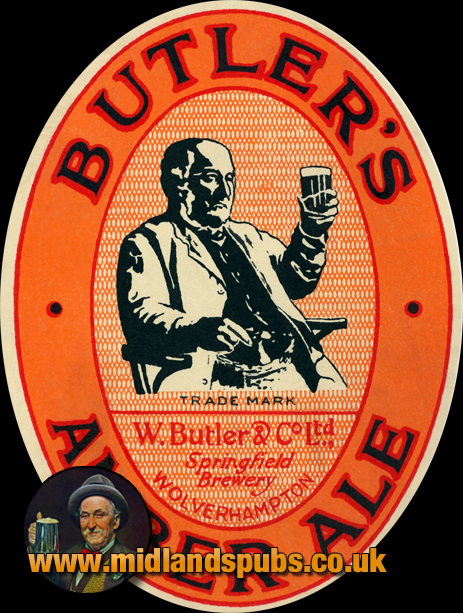 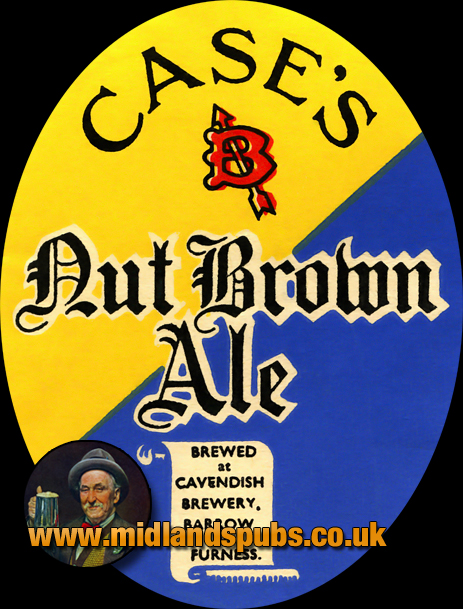 A beer label for Case's Nut Brown Ale. The production base for this company was located at the Cavendish Brewery in Barrow-in-Furness. The company was founded in 1860 in King Street at Ulverston but had moved to Barrow-in-Furness by the middle of the decade. The company had developed an estate of 60 public-houses by the time it was acquired by Hammond's United Breweries in 1959. Brewing at the Cavendish Brewery did continue throughout the 1960s but finally closed in 1972. 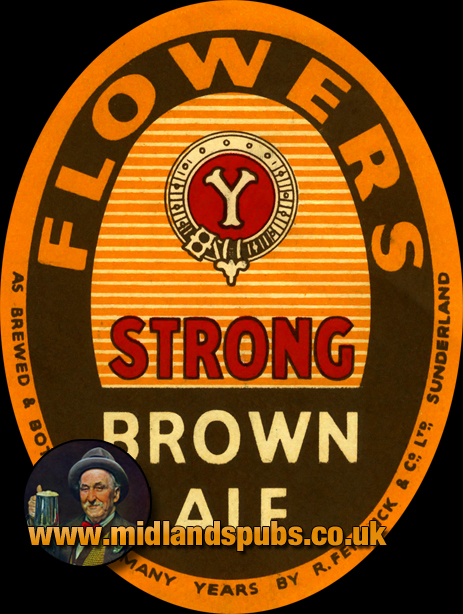 A Flower's beer label showing that some of the company's Strong Brown Ale was, for many years, contract brewed by Fenwick's Brewery at Sunderland. Flower's Brewery was founded in 1831 by Edward Fordham Flower. He was the son of Richard Flower, a brewer, banker and sheep breeder who moved from London to Illinois. Born in Hertfordshire, Edward Flower went to the United States with his father but returned to England to establish his brewery in Stratford-on-Avon. Indeed, he would later become the town's mayor and a magistrate for Warwickshire. Enjoying continual growth, Flower's Brewery was acquired by J. W. Green Ltd of Luton in 1954 and the name changed to Flower's Breweries Ltd. In 1961 the parent company was absorbed by the expanding Whitbread empire, one of the big six brewers in the UK. Flower's Brewery was closed in 1968 and production transferred to Whitbread's Cheltenham brewery. 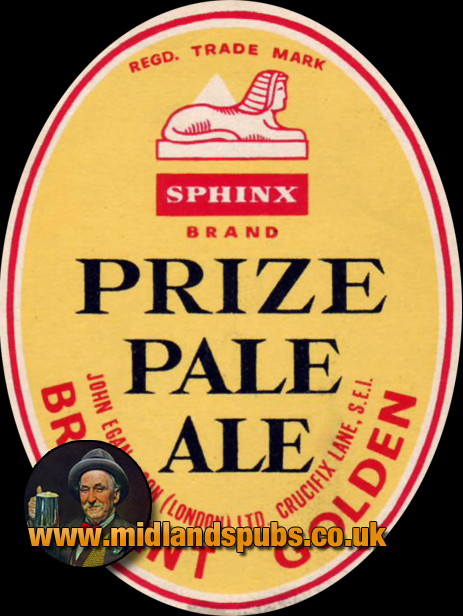 A beer label from John Egan & Son [London] Ltd. This label features the company's registered trademark of The Sphinx. The brewery was located in Crucifix Lane, a thoroughfare connecting Bermondsey Street and Druid's Lane not a million miles from Guy's Hospital and London Bridge. 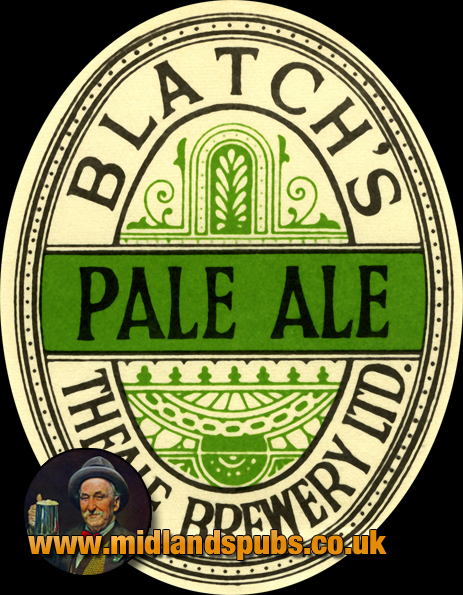 A post-war beer label for Blatch's Pale Ale. Blatch's Theale Brewery Ltd. was a family-run company swallowed up by Ind Coope in 1965. The brewery was founded in 1830 and bought by the Blatch family 24 years later. The locals of this Berkshire town like to boast that Theale's name is derived from "The Ale" due to the large number of inns that lined the road to Bath. The old brewery was located close to a pub called The Bull which, in more recent years, has been operated by Wadworth's. 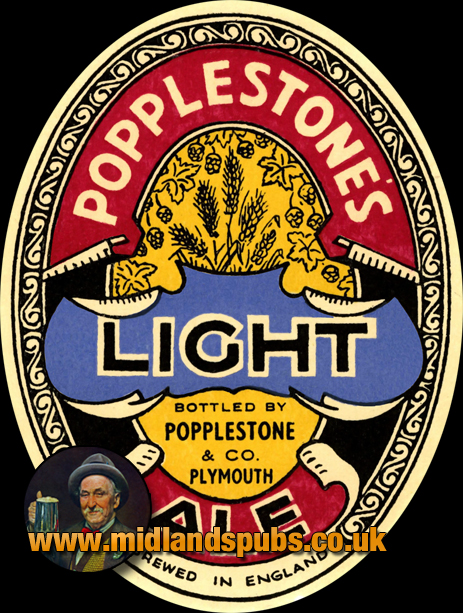 This beer label for Popplestone's Light Ale possibly dates from the 1940s, perhaps a little earlier. The company was founded by James Popplestone who was recorded as an ale and porter merchant of Russell Street by the early 1850s. Following his second marriage, the family moved to Buckwell Street where the firm operated as Popplestone and Co. During the 1880s the business did good trade in Champagne Cider. James Popplestone had branched into wines and spirits. James Popplestone died in 1892. His second wife died soon afterwards and the founder's son John Popplestone, in order to continue the business, had to bid at auction to acquire the premises and small estate of public-houses operated by the firm. He entered into a partnership with T. Penwill and they fended off bids by the Burton Breweries Ltd. to acquire the business for £14,050. The small estate of pubs operated by the company included the Chapel Vaults on George Street. the Crown Inn on Cambridge Street and the Ship on The Parade. In Eyre's Post Office Directory Popplestone and Co. were listed at 5 Buckwell Street and 14 Treville Street. The Penwill family took over the running of Popplestone and Co. Wallace Penwill was running the firm until his death in July 1930. By this time the company was based in Old Town Street. 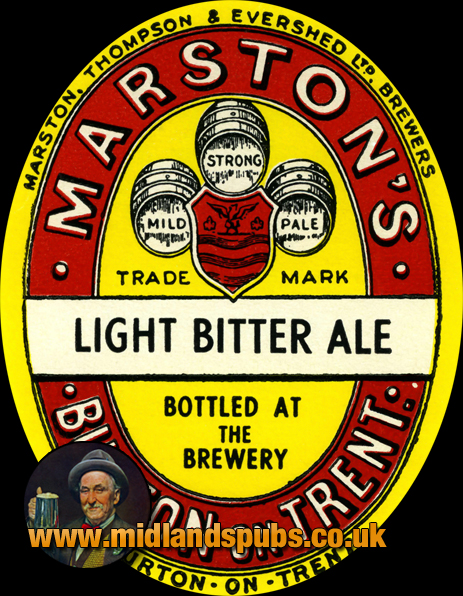 Light Bitter Ale label from the Shobnall Brewery of Messrs. Marston, Thompson and Evershed. The brewery was founded by John Marston in 1834 and merged with John Thompson's brewery in 1898. The Evershed name was added in 1905 when the Sydney Evershed operation was acquired. 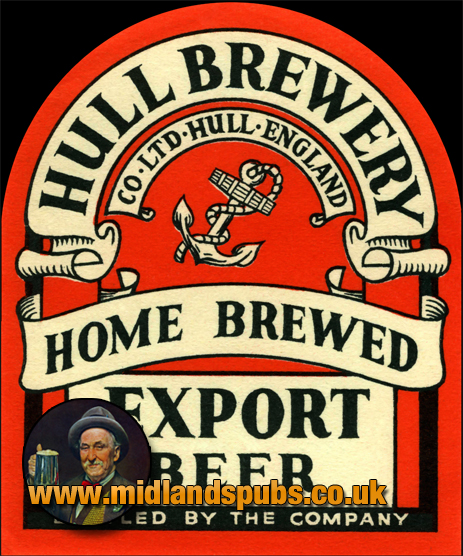 A beer label for Hull Brewery Home Brewed Export Beer. This company was founded by the Ward family in the 1770s. Proprietor of The Portsmouth and the George and Dragon, Thomas Ward teamed up with John Firbank to build a brewery on the corner of Posterngate and Dagger Lane. Through marriage the company evolved into Gleadow, Dibb & Co.Ltd. who moved to the Anchor Brewery in 1868. By the time of the Second World War the brewery supplied more than 200 tied-houses. The company was acquired by Northern Dairies Ltd. in 1971 and the Hull Brewery name was dropped. The whole enterprise was later bought by the Mansfield Brewery when production at Hull ceased. 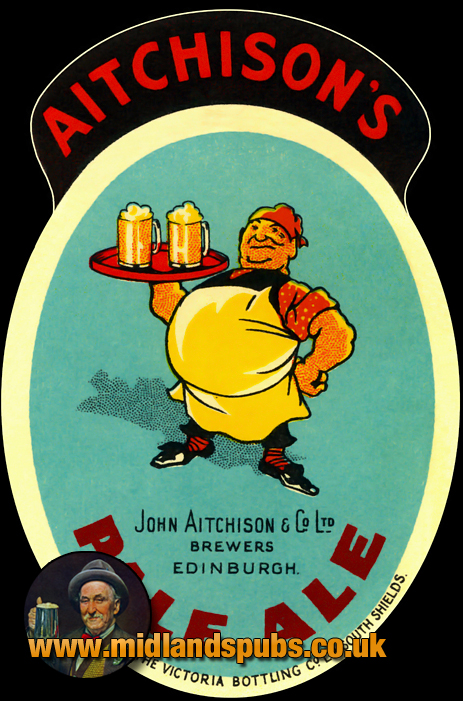 A very colourful beer label for Aitchison's Pale Ale. This brewery was founded in 1730 by William Kerr at Peebles. The firm was bought by John Aitchison in 1810 and the operation was moved to Edinburgh around twenty years later. The Canongate Brewery was located in Holyrood Road. The company, and a tied estate of 58 public-houses, was acquired by Northern Breweries in 1959 and production at Canongate ceased in 1961. 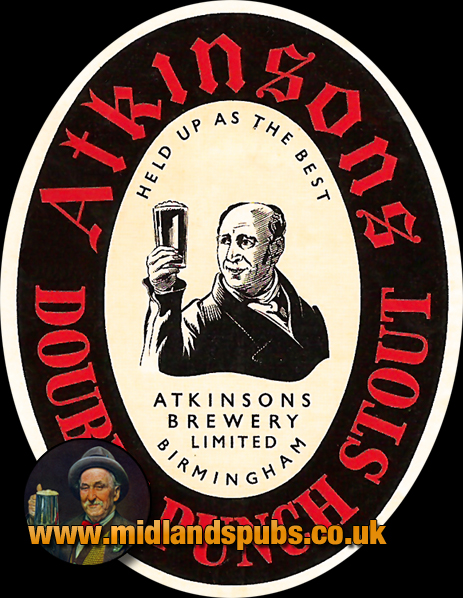 A beer label for Atkinson's Double Punch Stout. Founded in 1855 as Atkinson's Brothers, this company was based at the Aston Park Brewery. Their legacy can still be found in the fabric of many Birmingham pubs. They did operate public-houses in the surrounding areas, particularly in the Black Country. The company was acquired by Mitchell's and Butler's in 1959. 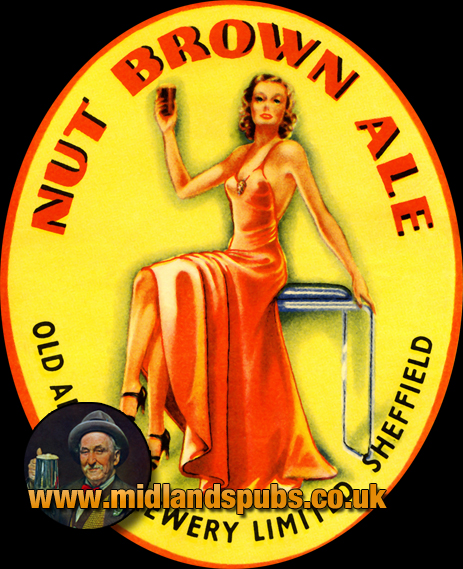 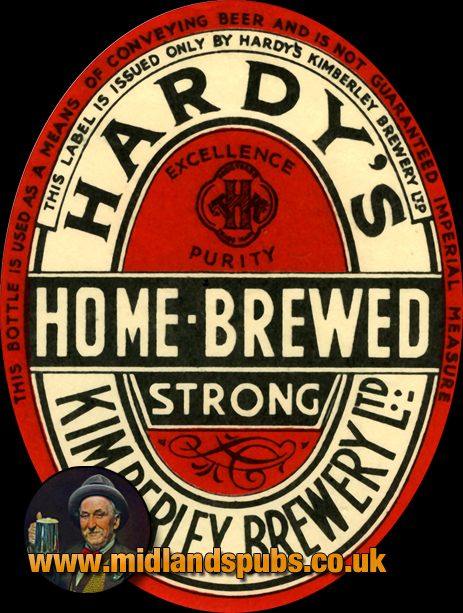 This Kimberley-based brewery merged with Hanson's in 1930 to form Hardy's and Hanson's, one of the largest breweries in Nottinghamshire. The company was acquired by Greene King in September 2006 and production of the Hardy's and Hanson's brands was switched to Bury St. Edmunds. It was in 1832 that Samuel Robinson rented an old bakehouse in Cuckold Alley and established Kimberley's first commercial brewery. Fourteen years later Stephen Hanson acquired land in Brewery Street and built a rival brewery. Enjoying considerable growth in their business, the Hardy family bought land in Brewery Street in 1861 and erected a modern plant opposite Hanson's. Seven years later the firm acquired their first tied house - the Cricket Player's Arms, which was next to the brewery site. This marked the battle to establish a tied-estate to promote further sales and expansion. It was in 1930 that, following secret negotiations, the two rival breweries merged. Apparently, it is not known who first proposed this business deal. 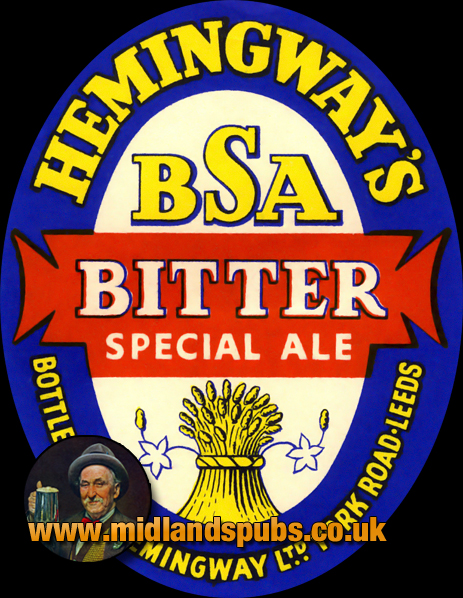 BSA Bitter, a special ale, was made by Hemingway's, the Leeds-based brewery founded in 1866. In the 1870s John Hemingway was based at 22 Regent Street but, in later years, production of the ales was made on the York Road. Along with five tied-houses, the firm were acquired by Tetley Walker Ltd. in 1967. 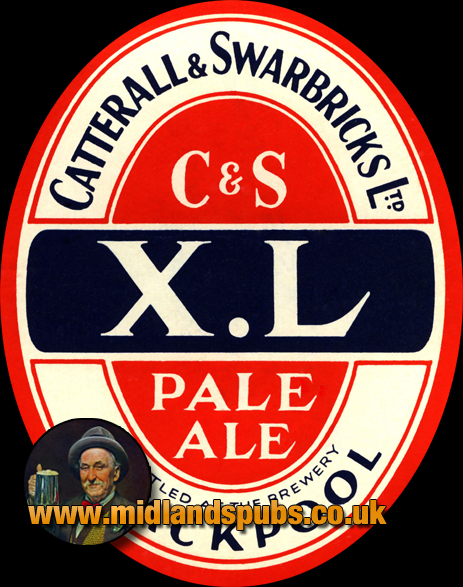 A beer label for Catterall and Swarbrick's XL Pale Ale. This company was the major brewery of the seaside town of Blackpool. However, the firm was founded at Poulton-le-Fylde in the early 1870s and did not move to Blackpool until 1927. Prior to this the resort's major brewer was Marton's. Based at the Queen's Brewery in Talbot Road, Catterall and Swarbrick's were swallowed up by Northern Breweries in 1961. The deal included the brewery's 104 tied-houses. 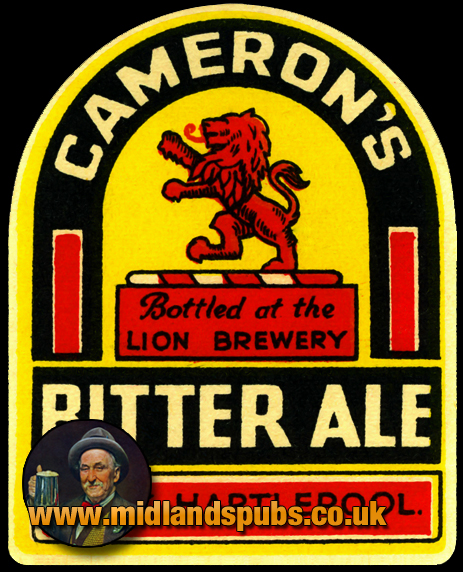 A 1940s beer label for Cameron's Bitter Ale. Based in West Hartlepool, this brewery's history can be traced back to 1852 when it was founded by William Waldon. The business was leased to John William Cameron in 1872 by which time the brewery was supplying a tied estate of 16 public-houses. The estate had grown to 750 pubs by the time the company was acquired by Ellerman Lines Ltd. in 1974. The estate was streamlined over the next decade when the company was bought by Barclay Brothers in 1983. Ownership later passed to the Brent Walker Group in 1989 but was snapped up by Wolverhampton and Dudley Breweries Ltd. three years later. 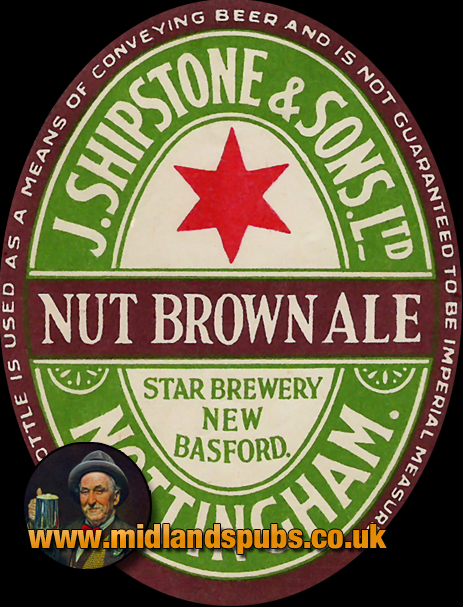 A 1940s beer label from the firm founded by James Shipstone in 1852. Visible for miles around Old Basford, the Red Star of the brewery became a very familiar landmark. Independent status was lost in 1978 when Greenall's of Warrington acquired the company. The Warrington firm ceased brewing at Nottingham shortly afterwards and the Star Brewery finally closed in 1991. 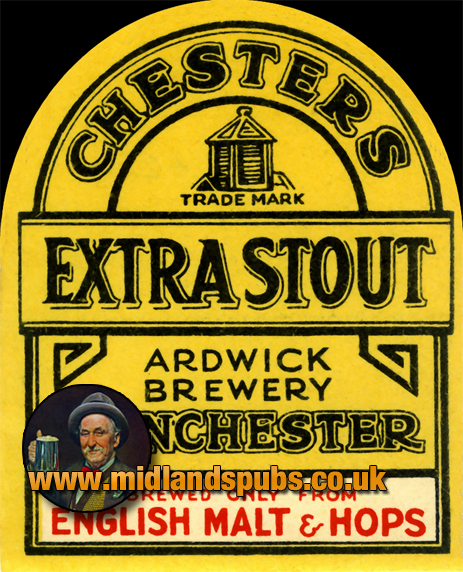 An old beer label for Chester's Extra Stout from the Ardwick Brewery that opened in 1852 but was a descendent of the older Victoria Brewery in Manchester. The company eventually merged with Threlfall's in 1961 and the Ardwick Brewery was demolished five years later. The beer brands lived on for a while when the merged company was taken over by Whitbread in 1967 but they eventually petered out. 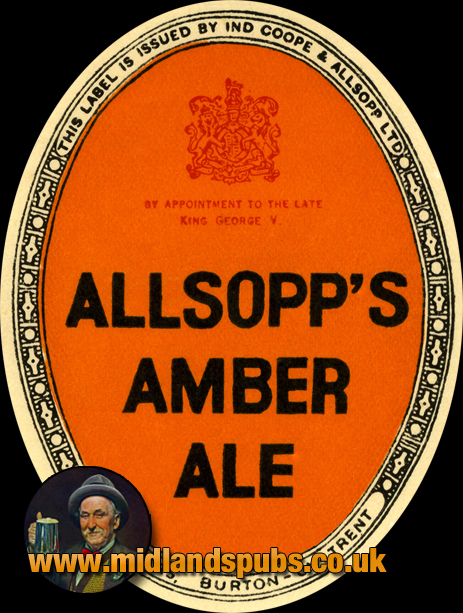 An inter-war beer label for Allsopp's Amber Ale. Based in the High Street of Burton-on-Trent, the history of this company can be traced back to the 1740s. Samuel Allsopp acquired the brewery in 1807. A new brewery and offices were constructed in 1859-60 close to the railway station. Samuel Allsopp was the first to export Burton Pale Ale to India in 1822. By 1890 their output had reached 460,000 barrels and they had a workforce of 1,750. However, the 20th century was not so favourable for the company and they went into receivership in 1913. Allsopp's was eventually merged with the neighbouring Ind Coope & Co. Ltd. to form Ind Coope & Allsopp Ltd.