The lifespan of the Bird-in-Hand was relatively short. Opened as a beer house in the mid-1860s, it was closed in 1936 when operated by Mitchell's and Butler's. The Cape Hill brewery had acquired the freehold of the property in January 1901.

Benjamin Little was probably the first publican of the Bird-in-Hand. A glasscutter by trade, he and his wife Sarah were certainly trading here by 1867. In June of that year Sarah Smith, a widow of Victoria Street in Smethwick, was charged with using two counterfeit coins at the Bird-in-Hand and committed for trial.

Born at Whitehaven in Cumberland in 1816, Benjamin Little married Sarah Hampson, a Liverpudlian, at St. George's Church in Everton during 1840. The couple moved south to Birmingham and lived in very modest surroundings, house-sharing to pay the rent at Nelson Street West. The 1871 census shows that they lived at the Bird-in-Hand with Sarah's sister Ann Waterfield. The widow was an annuitant so perhaps helped with finance to establish a beer house.

Benjamin Little passed away in 1872 and the licence passed to his widow for a brief spell before being granted to Edward Phillips in June 1874. Publicans came and went but it is clear, at least, that brewing was taking place at the Bird-in-Hand - as seen in the above advertisement for the sale of the beer house in October 1877. It must have been Joseph Priest who responded to the advert because the licence was transferred to him in December of that year.

Joseph Priest only stuck at it for a year because on October 3rd, 1878 the licence was transferred to Charles Harrison who kept the Bird-in-Hand with his wife Elizabeth. Advertising the tavern in 1881, with an incoming of £350, the couple later moved to Barton's Bank from where Charles worked in the shoe trade. They later moved to Leonard Road at Birchfield.

The Bird-in-Hand was midway along Aberdeen Street and situated on the northern side of the street. The back garden backed onto a row of cottages in Peel Street named Peel Buildings.

By the 1890s the beer house formed part of the tied estate of Alfred Homer's Vulcan Brewery. The Aston-based company was acquired by Mitchell's and Butler's in 1899. This meant that the lease was transferred to the Cape Hill brewery who, in January 1901, acquired the freehold for £1,100.

Before these lease and property transfers Charles and Clara Lycett were running the Bird-in-Hand. Possibly as a result of the ownership changing, they moved to New Summer Street before taking over at the Bull's Head at Prospect Row.

Arthur and Harriet Mason kept the Bird-in-Hand during the Edwardian period. The couple had married in 1882 at the Parish Church in Ladywood. Before entering the licensed trade, they lived in Icknield Port Road from where Arthur toiled as an iron plate worker whilst Harriet worked as a confectioner. 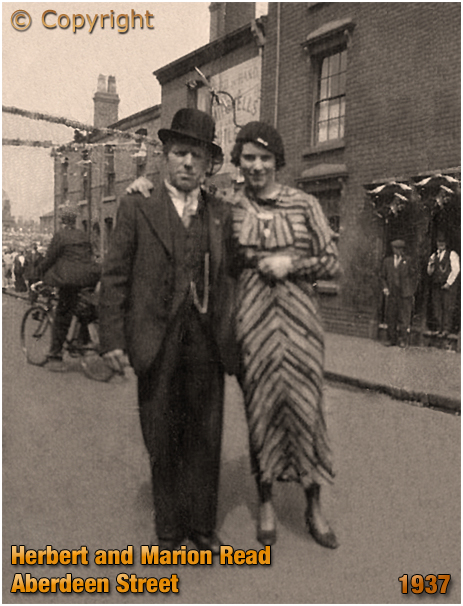 This photograph was kindly sent to me by Malcolm Read. The photograph shows his grandfather Herman W. Read and Malcolm Read's mother, Marion [Twycross] during the celebrations for King George V's Silver Jubilee in 1935. Look behind them and you will notice the Bird-in-Hand. This is the only photograph I have seen of the tavern. Malcolm was a resident of the street himself, living at 1/102 Aberdeen Street from where he attended Barford Road School. Malcolm told me that sometime in the 1920s the Bird-in-Hand was enlarged by being extended back into the rear garden and a single-storey toilet block and store was added.

Leonard and Alice Sage were the last couple to manage the Bird-in-Hand for M&B. Born in 1897, Leonard married Alice Lampitt in April 1928 at West Bromwich. The couple took over the Bird-in-Hand on July 13th, 1931. At this time the average weekly takings at the pub was around £52. or just over 300 barrels per annum.

The Bird-in-Hand was closed on November 19th, 1936. The licence was one of three surrendered by M&B in order to gain a full licence for The Raven on Weoley Castle Road at Selly Oak. The latter opened on the following day.

Licensees of the Bird in Hand 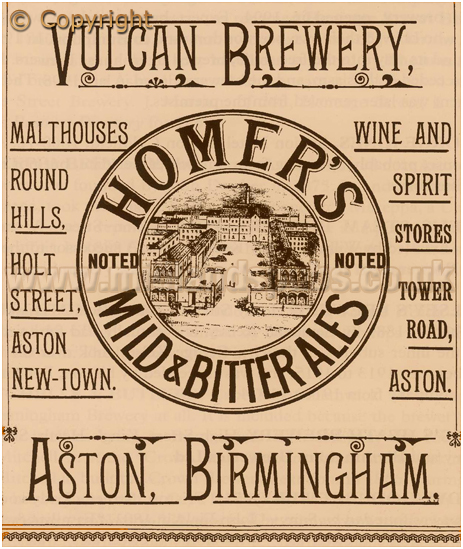 "Sarah Smith [38], widow, Victoria Street, Smethwick, was charged with passing two counterfeit shillings at the house of Mr. Benjamin Little, Bird-in-Hand, Aberdeen Street, on the 1st and 8th inst., and also attempting to utter another at the same house on Friday night. At the above mentioned periods the accused called at the prosecutor's house, and had some refreshment, each time tendering a bad shilling. The first time the bad coin was not detected, but the second was, after the prisoner had left the house. On Friday night, the prosecutor's wife, after receiving another shilling from the accused, tried it, and finding it to be lead, she gave her into custody. She was searched, and in the band of her skirt was found two counterfeit shillings wrapped in the usual way in tissue paper. The prisoner denied having passed, the two first shillings, and said she received the third one, which she confessed having uttered, from a lodger, but did not know that it was bad. She accounted for the two bad shillings found in her dress by saying that she picked them up, together with sixpence, in the street. The prisoner was committed take her trial at the Sessions."
"Uttering Counterfeit Coin"
Birmingham Daily Gazette : June 17th 1878 Page 6.