This list of public-houses without signs was featured in Kelly's trade directory published in 1940 and includes No.1 Aberdeen Street occupied by Mrs. Minnie Katherine Charles. By this time she was 72 years-old. She was assisted by Florence Spurrier. During the Edwardian period she was running the Gem Vaults on Steelhouse Lane along with her husband Alfred. In the early 1920s she was a beer retailer at No.643 Bearwood Road in Smethwick. She lived here at No.1 Aberdeen Street during the 1930s. She died in Western Road when she died in January 1945. 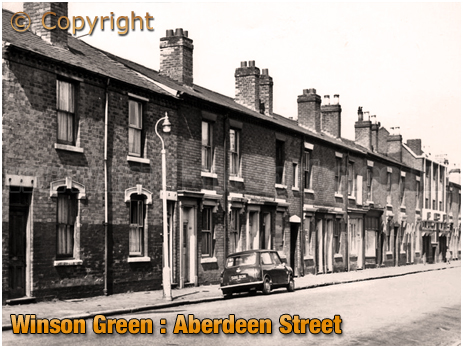 "A workhouse girl, named Margaret Smith, fourteen years of age, was charged with stealing two rings, value £1. 7s. 6d., the property of her master, Mr. William Thomas Swene, residing at 4, Aberdeen Street. It appeared that the prosecutor had taken the girl into his employ since Tuesday from the workhouse. On Sunday morning the matron of the workhouse brought one of the rings to his house, and said that the prisoner had brought it there on Saturday morning and gave it to a little girl named Wheeler. On taxing the prisoner with stealing the article, she said that she had found it on the bedroom floor of her master's house. The prosecutor on learning that the prisoner had borne a very bad character at the workhouse gave her into custody. The other ring has not been found, though they were both left safe in a drawer a few days previously. Mr. Kynnersley remanded the prisoner till Saturday, in order to endeavour to get her into some Reformatory school."
"Robbery by a Servant Girl"
Birmingham Journal : May 14th 1859 Page 7