History of the Queen's Head on Aberdeen Street at Winson Green in Birmingham in the county of Warwickshire.

Some history of the Queen's Head

The Queen's Head was originally a small beer house and formed part of a terrace of housing erected in the mid-19th century. Following the acquisition of the freehold in 1935, Mitchell's and Butler's rebuilt the pub and a licence to retail wines was granted just before the Second World War. In the early years of the 20th century the pub closed and was converted into The Redeemed Christian Church of God. 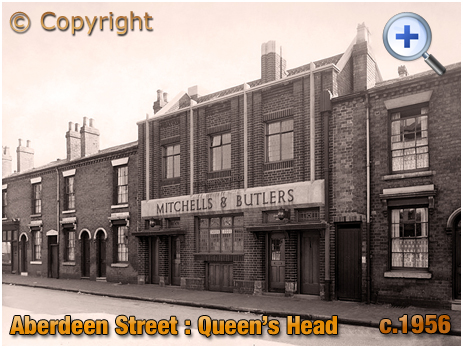 I have only seen a tantalising glimpse of the original Queen's Head - this image shows the replacement building which occupied the site of the old pub, along with a neighbouring terraced house. The building was typical of mid-1930s architecture with simple lines and uniformity. It was nicely understated and would have satisfied the magistrates during the pub reform period. After late Victorian street re-numbering, the address of the earlier pub was 115 Aberdeen Street but the new building was Nos. 115-6.

A 99-year lease was first agreed on March 25th, 1861 though I am not sure if this was for a building plot or a building. I have seen newspaper advertisements from this period that were for sales of land on which to develop. An early reference in the press regarding the original Queen's Head was a bankruptcy notice published in August 1862 announcing that Thomas Taylor was residing as a lodger at the tavern. The retail brewer and gilt toy maker had previously kept the Queen's Head at John Street in Lozells.

Charles Mills was running the Queen's Head in the late 1860s. He was possibly a leaseholder-publican as the Mills family name appears in property purchases of adjoining cottages in later years.

Evan and Ann Rowlands were running the Queen's Head during the early 1870s. The publican was born in Glamorganshire around 1826. When living in Easy Row, he married Ann Sharrad at St. Martin's Church in May 1848. The daughter of a farmer, she hailed from Sutton Coldfield. Evan Rowlands had previously worked as a butler, possibly at Harborne Hall. 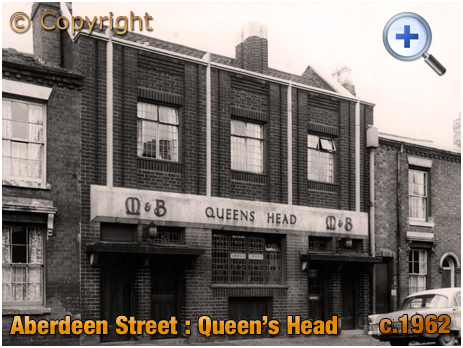 In December 1879 the licence of the Queen's Head was transferred to John and Frank B. Parsons, sons of Richard Parsons who owned the Brown Lion on Hall Street in Hockley. They appear to have been busy with other work, Frank being an architect's assistant, so I suspect that they installed a manager to run the Queen's Head. The 1881 census records Edward Timings as the manager of a retail beer house rather than publican. He managed the pub with his wife Emma. The couple were both from Birmingham. They did not remain in the licensed trade for long as Edward Timings returned to his trade of die sinker.

Harry Hunt was the licensed victualler in charge of the Queen's Head throughout the 1890s. He kept the beer house with his Netherton-born wife Mary. They were assisted by niece Jane Johnson who was also from the Black Country. In the last decade of the 19th century she was married and widowed but continued to work at the Queen's Head. 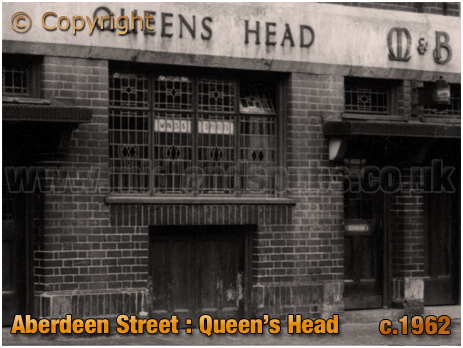 Taking over in the early reign of King George V, George Billingsley kept the Queen's Head until the property was pulled down in the mid-1930s. He officially left the pub on November 16th 1936. George and his wife Lily had previously run the White Hart Inn on the corner of Hospital Street and Buckingham Street for Holder's Brewery Ltd. At the Queen's Head they were tenants for Mitchell's and Butler's. The Cape Hill brewery had acquired the lease from E. J. Grant on October 1st, 1889 when it was the firm of Henry Mitchell. The brewery also acquired the leases of seven neighbouring houses and it was all a bit messy for them to gain the freehold of all the property required to demolish and rebuild the Queen's Head. They achieved this in March 1935 by paying the executors of J. Mills, almost certainly a descendant of Charles Mills who had run the Queen's Head in the 1860s. 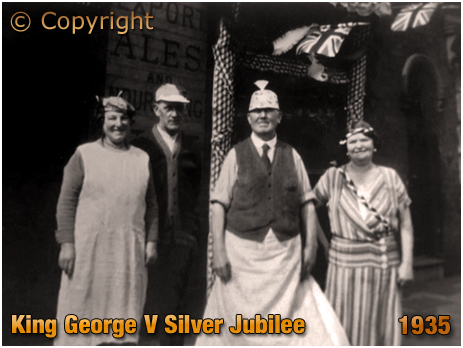 Despite the fact that the old Queen's Head was to be replaced it would take some time for the brewery to organise planners, meetings and contractors. In the meantime George and Lily Billingsley still had a pub to run. And here they are celebrating the Silver Jubilee of King George V in 1935. I am most grateful to Ann Smith who supplied this photograph of the couple stood outside the original Queen's Head, the only image I have seen that features the building. They have decorated the frontage of the Queen's Head which features a wall-painted sign advertising "Export Ales and Nourishing Stout." Note also the curved arch above the entrance to pub. 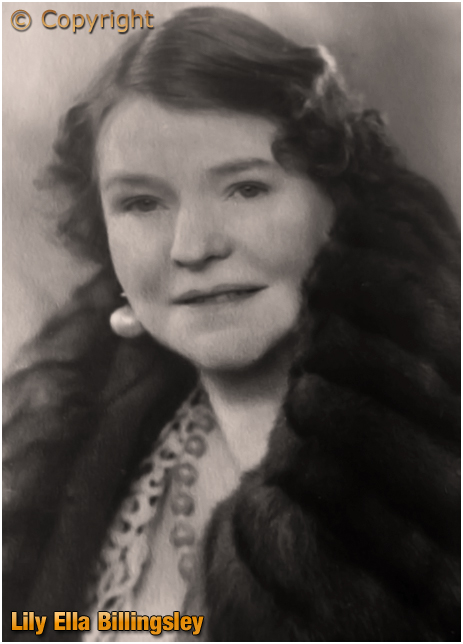 Ann has also supplied me with a photograph of Lily Ella Billingsley who, she informed me, had "red hair until the day she died, all natural and the temper to match." Well, I like a landlady with a bit of fire - it generally means that the pub is orderly.

George Billingsley was born in January 1871. His father, also George, worked in a number of metal trades before entering the licensed trade. George Jr. was working as a tube drawer when he married Lily Rea at St. Stephen's Church in July 1897. The daughter of the waggoner Herbert Rea, Lily and her husband were soon running The Anchor on Sheep Street. By the end of the Edwardian period the couple were running the White Hart on the corner of Buckingham Street and Hospital Street.

The new Queen's Head was opened in July 1937. The house would no longer be kept by tenants, the brewery opting to employ managers to run the place. The first couple to manage the shiny new building were Sidney and Kathleen Guck. Born Henry Montague Guck at Aston in 1904, he married Kathleen Saunders in July 1929. The couple's early home was in Hope Street. Their stay at the Queen's Head was brief but they were one of those couples that did the rounds. In 1939 they were running the White Swan on Navigation Street. At the end of the Second World War they were at The Star in Dale End. 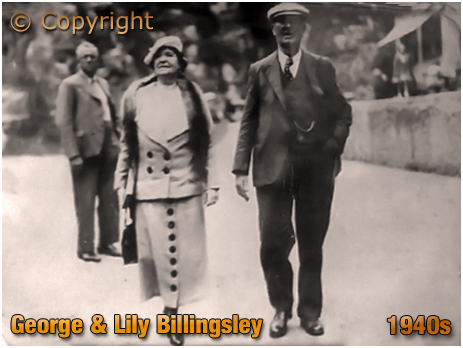 The family that had occupied the former Queen's Head may have patronised the new public-house. George and Lily Billingsley had only moved a short distance - the couple went to run an off-licence at No.94 Winson Street. The couple's son had married and was living with his family in Aberdeen Street.

The licence of the Queen's Head was transferred to Thomas Wilson in 1939. He managed the pub with his wife Edna. The couple had a young son named Thomas. They increased the average weekly taking at the Queen's Head from under £100 to more than £150. To achieve this they shifted more than 500 barrels of beer per month.

The Wilson's remained at the Queen's Head for many years. Trade directories show they were still running the pub in the mid-1950s.

If you have a genealogy story or query regarding the Queen's Head on Aberdeen Street you can contact me and I will post it here in addition to including your message within the website pages for Birmingham Genealogy.

"My Great-Grandparents were Lily Ella and George Billingsley who were the licensees of the Queen's Head. My Gt Gt Grandfather had pubs in Birmingham. Herbert Rea, his daughter who was Lily Ella was left a pub we believe in Hospital Street. She was unable to be the licensee due to her being a female so she married George Billingsley. I have lots of information but have just moved so it's in boxes. The Queen's Head was a small thatched building which was demolished in about 1933 and, according to my Mom, they built that monstrosity. I am trying to find a photograph of the original pub. My Mom is 90 and keeps talking about it, can you help me?"
Ann Smith

"I am afraid I do not have a photograph of the original pub Ann. Indeed, I have never seen an image of the old place and did not know it had a thatched roof. I would be quite surprised as the building was not so old and part of a terrace. The pub to which you refer was one of those with two addresses. The White Hart did have an address of 82 Hospital Street but was more commonly listed at No.1 Buckingham Street. George and Lily Billingsley were running the place at the time of the 1911 census. In the census conducted ten years earlier the couple were running the Anchor Inn on Sheep Street. They were married on July 4th 1897. George and his father were involved with a number of public-houses in Birmingham, though they were tenants for the brewers rather than owners. For example, the White Hart was owned by Holder's Brewery. The family were running another Queen's Head on Camden Street for Rushton's Brewery in the late Edwardian period."
Kieron 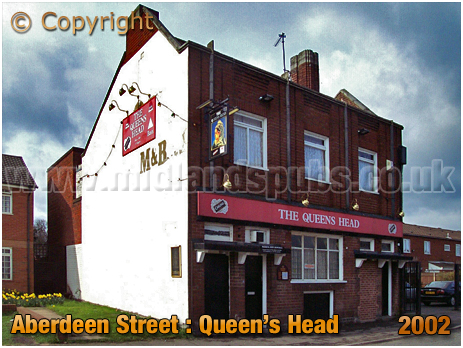 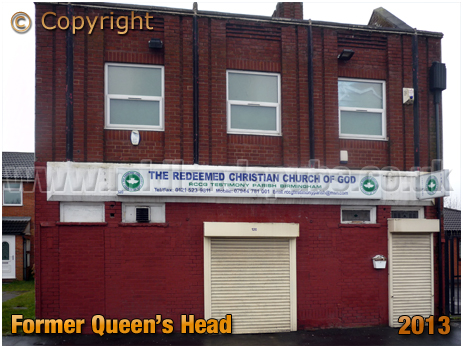 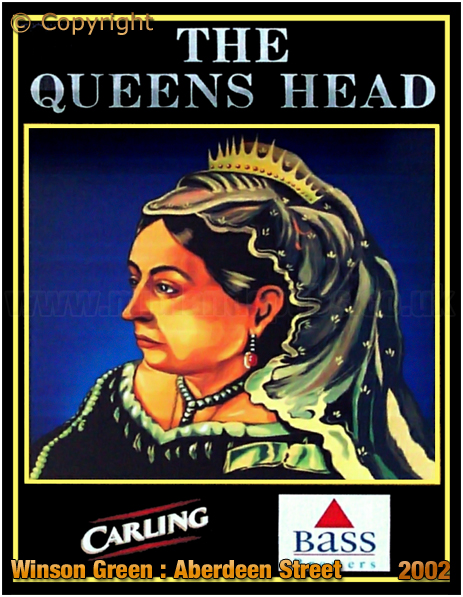 Queen Victoria is the most popular monarch on signs of The Queen's Head although I do see a few of other monarchs such as Queen Elizabeth I. However, most urban pubs and beer houses first opened during Victoria's reign so this would explain the signboard's popularity. Queen Victoria was the only child of King George III's fourth son, Edward, Duke of Kent, and Victoria Maria Louisa of Saxe-Coburg, sister of Leopold, king of the Belgians. Born in Kensington Palace, she was crowned following the death of her uncle William IV in 1837. She married Prince Albert of Saxe-Coburg and Goth three years later.