The Bricklayers' Arms opened as a beer house and was located on the north side of Adderley Street, on the eastern corner of Liverpool Street. 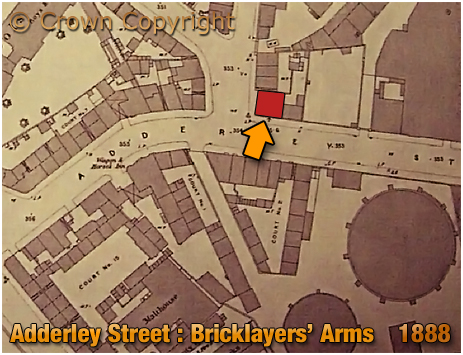 The tavern can be seen on this extract from a plan dated 1888. The beer house was a short distance from the Waggon and Horses. The gas holders or gasometers of the Birmingham and Staffordshire Gas Company can be seen across other side of the thoroughfare.

The lifespan of the beer house seems to have been fairly short, perhaps not surprising given some of the antics that went on in the place.

Richard Turner was an early publican of the Bricklayers' Arms. The 1851 census records him living on the premises with his wife Ann who hailed from the Warwickshire village of Corley. A daughter named Mary also lived at the tavern with her husband Henry Cartwright who worked as a butcher.

The auction notice for the Bricklayers' Arms provides some detail on the property, particularly that it was a retail brewery and featured large stables. Not that the house boasted a "steady and respectable trade." The good reputation of the Bricklayers' Arms was to be shattered when publican James Chambers, along with several of his patrons, hatched an audacious plan over some tankards of ale, a scheme that would make them the talk of the town. 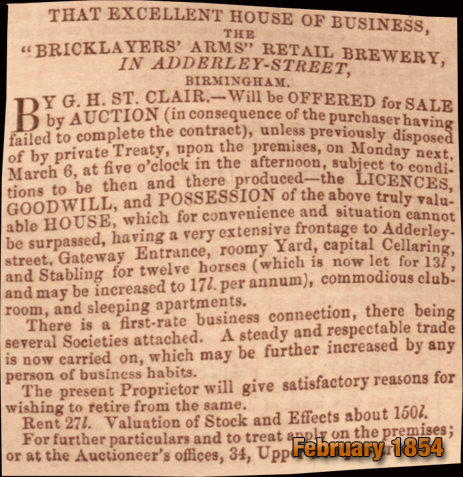 In 1856 James Chambers was sensationally ousted from his position at the Bricklayers' Arms when he and a number of other men were arrested after a robbery at the premises of Henry Burbridge in Bradford Street [see newspaper article]. He was subsequently committed to the Assizes for trial where he, along with John Taylor and Charles Brown, was found guilty and sentenced to 14 years' transportation. Convicted in March 1856 they were put on a ship bound for Western Australia in September 1857.

James and Clara Mason were mine hosts at the Bricklayers' Arms in the early 1860s. Clara Mason later took over the nearby Waggon and Horses, a pub she kept with her second husband.

Jeremiah Roberts was the licensee in March 1866 when William Moore, a resident of Trinity Street, was central to an impudent robbery. He was acting as a waiter in the tavern and when Thomas Griffin of Little Edward Street called for a pint of beer, he supplied him with his drink. Griffin paid Moore with a sovereign and waited for his change. The landlord, Jeremiah Roberts, handed the waiter the money but instead of taking it to Thomas Griffin he absconded. Clutching the 19s 10d., he wandered off to another public-house where he "squandered the money away in the company of several companions." Information of the robbery was given to the police, and the William Moore was duly apprehended. He acknowledged his guilt, stating that he had been drinking for a week, when he was tempted to steal the money, and spend it all on more drink. The Magistrates were not amused and committed him for trial at the Sessions.

The Scottish-born draper William Douglas was running the Bricklayers' Arms in the late 1860s and early 1870s. He kept the beer house with his wife Agnes, also born in Scotland. However, the couple's paths may not have met until they came to Birmingham as they were married at St. Mark's Church in June 1860. They first set up home in King Edward's Road.

I followed up this story and the names of those convicted at the Assizes are a little different. Licensee and retail brewer James Chambers was one of those on trial. He was charged alongside the brassfounder Charles Brown, a spoon polisher named Samuel Stephens, the labourer Samuel Harris, William Finnemore alias Jones, also a brassfounder, and John Taylor. In summing up, the Judge stated that it was "one of the most daring, dangerous, flagrant robberies of the kind which had ever been under his notice." Chambers, Brown and Taylor were sentenced to 14 years' transportation and Stephens, Finnemore and Harris were sentenced to 18 months in prison.