The Parliament House at No.39 was located on the southern side of Ashted Row, close to Saint Vincent's Roman Catholic School, though it pre-dated the educational building by many years.

The sign of the Parliament House is a rare inn sign. Indeed, it may be unique. However, I am not sure how or why the name was applied to this tavern. Although it was initially a beer house, the house was fully a licensed public-house for most of its lifespan and, cor, it was even named on the map extract from 1888.... 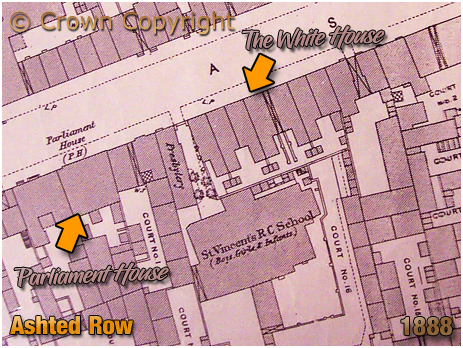 I have not seen a photograph of the Parliament House. The map suggests it was a fairly large tavern. With regard to the school, the National Archives website states that "St. Vincent's R.C. School opened in 1884. The Mixed Department occupied a new one-room school-chapel and the Infants Department was housed in an existing repaired building. The Mixed Department was divided into separate boys and girls departments in 1887. The school buildings, which were condemned by the Board of Education in 1914 and 1925, were replaced by a new building in Vauxhall Grove, which opened in 1931. This provided accommodation in two departments for senior mixed and junior and infant children. It became an aided school in 1953." 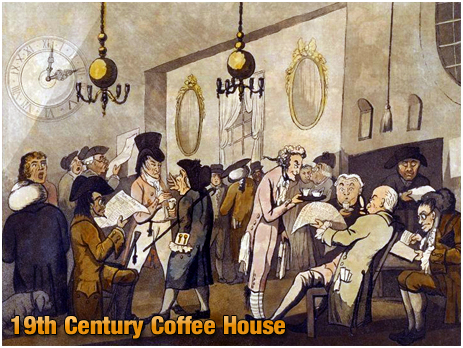 No.39 may have been a coffee house prior to being licensed to sell alcohol. It was John Blissett who started to retail beer on the premises and applied for a full licence in September 1839. He was documented as a coffee roaster which makes me wonder if this was formerly a coffee house. Such places were popular with the middle classes who met over a hot drink to meet for companionship, conversation and commerce. The newspapers were generally available and political debate would ensue. Perhaps this is the reason for the Parliament House inn sign. The genteel well-educated middle classes started to abandon Ashted Row in the early 19th century as the village social demographic changed. Perhaps John Blissett considered the future of his business and opted to sell alcohol to the working classes who had started to make Ashted their home.

In addition to coffee and alcohol, the Blissett family were also in partnership with a man named Reynolds acting as agents for ice. In the 1840s they advertised "Pure Wenham Lake Ice" which could be purchased in any quantity from their stores in Upper Windsor Street.

The son of Thomas Blissett and Mary Heward, John Blissett was born in January 1775. He was living in Yardley prior to his marriage to Hannah Anderton at Saint Martin's Church in July 1801.

The licence of the Parliament House, a building owned by James Perry, was transferred to Richard Blissett by 1847 as the elderly John Blissett was forced into retirement. After a long illness the former coffee roaster and publican died in his 77th year during August 1850. He was buried nearby after a service at the Church of Saint James the Less.

Richard Blissett had married Julia, second daughter of John Cartwright of Gornal, at Aston parish church in December 1843. Following his death, Julia Blissett, along with two young sons, went to live with her brother Richard Cartwright, licensee of the Green Dragon at Gornal. Looking back, this tavern was where she grew up when it was run by her father. 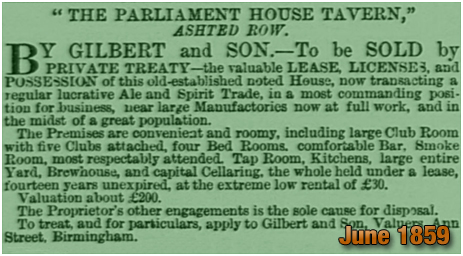 The lease of the Parliament House Tavern was advertised three times in the 1850s, including the above sale in 1859. The advertisement provides a description of the premises, including a club room used regularly by five clubs. I assume that this was the year in which George Cook responded to the advertisement. He was here at the time of the census conducted two years later. A local man, he lived at the pub with his London-born wife Catherine. His younger sister Charlotte also lived on the premises and worked as a barmaid. Living next door at No.40 was the Herefordshire-born wheelwright Joseph Bowen and his family.

John Evans was licensee of the Parliament House by 1867. However, this turned out to be a bad career move for the journeyman wire drawer. In 1869 he was declared bankrupt.

Charles Cox had taken over the licence by 1872. He was quite an entrepreneur and employed managers to run the house whilst he set about building his empire. For example, in 1871 William Collins was the manager. He was born in Upper Barton, Staffordshire in 1828. Eight years younger, his wife Elizabeth hailed from Stoke-on-Trent. The couple had clearly moved south just after marrying as their 8 year-old daughter, also named Elizabeth, was born in Birmingham.

Licensee in the late 1880s, an 1891 rate book shows that David Bloor was both occupier and owner of the Parliament House. The rateable value was £66. 0s. 0d., the annual rate for the property was £2. 2s. 8½d. Former glass-maker David Bloor died at the Parliament House on October 4th 1902 and his widow Emma continued as licensee. The couple's son, Joseph, had been brewing the beer sold over the counter or from the stillage. The house was busy enough for them to employ two live-in barmaids/servants. Emma Bloor died in August 1918.

I do not have an exact date of closure of the Parliament House but I think it was 1920 or 1921. The last appearance in trade directories was in 1921 when Ellen Greenway was the licensee.

Licensees of the Parliament House

"Catherine Reynolds, a widow, fifty-two years of age, who lived at the back of No.39, Ashted Row, died very suddenly early Monday morning last, under the following circumstances : She had been suffering from a cough for six weeks previous to her death. but as this was a chronic affection, recurring every winter, no danger was apprehended. On Sunday night her daughter slept with her, when she seemed in her usual health, and rose about half-past seven o'clock Monday morning, to go to work, leaving her mother, as she supposed, in a sound sleep. On returning at nine o'clock, the girl went upstairs to rouse her mother, and found her dead. At an inquest held at the Parliament House, Ashted Row, on Wednesday evening, a verdict of "Died by the Visitation of God" was accordingly returned."
"Awfully Sudden Death"
Birmingham Journal : February 21st 1846 Page 5

"Samuel Speed [21], spoon filer, Court, Prlncip Street, and Thomas Packer [28], action filer, Court, Heneage Street, were charged with being drunk and disorderly in the Parliament House Inn, Ashted Row, and wilfully breaking a plate-glass window value £2. Mr. Fellows prosecuted. Speed was also charged with assaulting Mr. Dale, the manager of the house. About half-past ten o'clock on Tuesday night, the prisoners and some companions entered the Parliament House. They had some liquor and paid for it. The prisoners afterwards called for half a pint of four-penny which was taken to them by the barmaid. They put down three-pence, and refused to pay more, Mr. Dale came into the tap-room to see what was the matter, when the prisoners picked up the money, drank the beer, and walked out of the shop. Mr. Dale tried to stop them, and Speed struck him on the mouth. On reaching the street the prisoners and their companions began throwing stones at the house, and broke a plate-glass window. They had no reply to the charge, and were ordered to pay the damage, with 2s. 6d. each, and costs. Speed being also fined 5s. and costs for the assault. In default they were to be imprisoned, Packer for twenty-one days, and Speed for a month."
"Awfully Sudden Death"
Birmingham Daily Post : September 22nd 1870 Page 6