History and Information on Barr Street in Hockley at Birmingham in the County of Warwickshire.

Some history of Barr Street 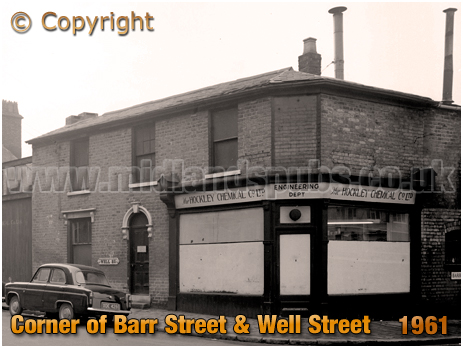 If you have a genealogy story or query regarding Barr Street you can contact me and I will post it here in addition to including your message within the website pages for Birmingham Genealogy.

If you would like to share any further information on Barr Street - perhaps you drank in one of the pubs in the past? Or maybe knew a previous publican running one of the boozers? Whatever the reason it would be great to hear of your stories or gossip. Simply send a message and I will post it here.

"On Saturday evening an inquest was held at the Grand Turk Inn, Ludgate Hill, before Dr. Birt Davies, the Borough Coroner, to enquire into the circumstances attending the death of John Wheeler [27], a stamper, who lived in Barr Street. Martin Fleming, living in Barr Street, stated that the deceased lodged with him. On Sunday evening, the 24th of June, the deceased, witness, his wife, Patrick Maloney, and a young woman named Bridget Brunnan, were drinking at the Royal House public house, in Barr Street. An altercation occurred between his [witness's] wife and Patrick Maloney which was renewed at witness's house, where they adjourned shortly afterwards. From words they got to blows, and the deceased then interfered on behalf of Mrs. Fleming. Maloney was pulled out of doors into the court, and they struggled together on the ground. The deceased got up from the ground immediately afterwards, and ran several yards. Knowing that he was subject to fits, witness followed after him, and found that he had fallen in a fit. Two other fits followed, and while these continued he was knocking his head about, so that it was necessary to hold him down. When he recovered witness asked him why he did not get up. He replied, "Maloney gave me a blow with the poker." Maloney, who was standing near, said, "Why did you say I hit you with the poker? I had no poker in my hands; I had got nothing at all in my hands." The deceased made no reply to this. If they had not prevented him the deceased would probably have killed himself by knocking his head about so violently. Shortly afterwards he was conveyed in a cab to the General Hospital. He [witness] did not see anyone use a poker, either inside or outside his house. It was impossible for Maloney to have had a poker in his hand without witness seeing it, because he was watching his movements. He could not tell how the skull of the deceased was fractured, unless it was when he fell. Mr. Maher [who appeared to watch the case on behalf of Maloney]: The deceased struck his head against the ground more than once. Bridget Brunnan said she was in the house of the last witness when the altercation was renewed between Fleming's wife and Maloney. With the exception of Fleming and herself the company were intoxicated. After the deceased, Maloney, and Mrs. Fleming had gone into the yard, she saw the deceased fall down in a fit, after walking several yards. She did not notice how he fell. There were round stones on the ground where he fell. Soon after Fleming went to him, and took hold of him as he was knocking himself about. There was a poker in the house, but she did not see any person with it, nor did she hear deceased say Maloney had struck him with a poker, though she was by them. She did not know how his skull was fractured. Nobody struck him while she was there. Sarah Fleming stated that after she had gone into the yard with Maloney and the deceased they tumbled about, after which the latter got up and ran several yards. Maloney followed him, and struck him with his open hand in the face. The deceased then fell, and had a fit. Mr. Maher: The deceased frequently had fits when he was drunk. Dr. Steele, house surgeon at the General Hospital, said, when the deceased was taken to that institution, he was suffering from a compound fracture of his skull. He became comatose, and expired on the 2nd inst., from the effects of the injury. A blow from a poker would have been likely to have caused such an injury. It was extremely improbable that such an injury would have been caused by falling on stones like those mentioned. Mr. Maher: It would not have been likely if he had fallen in a fit, and then knocked his head about. The Coroner, in summing up, said, if the Jury believed the deceased had been killed by a blow from a poker, their verdict would unquestionably be one of manslaughter, but that was not proved by the evidence. Only one person referred to the use of a poker, and that was the deceased himself, and when he said that Maloney had struck him with a poker, the latter denied having had a poker in his hands. The evidence did not show that any person had struck the decease with a poker, and inflicted the wound which caused his death and under the circumstances, they could not return a verdict of manslaughter against any person. The Jury then consulted, and returned a verdict to the effect that the deceased died from compound fracture of the skull, but how or by whom inflicted there was no evidence to show. Maloney, who was taken into custody, and was remanded by the Magistrates on bail, will be brought up again on the charge of manslaughter."
"Alleged Manslaughter In Barr Street"
Birmingham Daily Post : August 6th 1866 Page 5