History and Information on Bath Row in Birmingham in the County of Warwickshire.

Some history of Bath Row 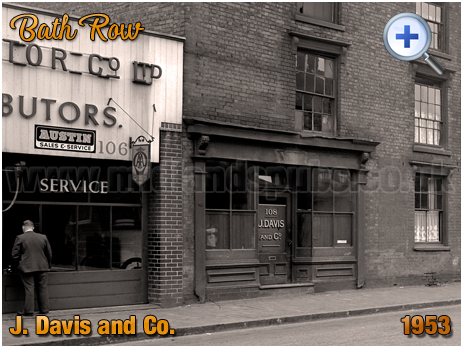 If you have a genealogy story or query regarding Bath Row you can contact me and I will post it here in addition to including your message within the website pages for Birmingham Genealogy.

If you would like to share any further information on Bath Row - perhaps you drank in one of the pubs in the past? Or maybe knew a previous publican running one of the boozers? Whatever the reason it would be great to hear of your stories or gossip. Simply send a message and I will post it here.

"Shortly before midnight a serious fire was discovered in Bath Row. The flames illuminated the sky for a considerable distance over Birmingham, and everywhere the impression grew that the Queen's Hospital was on fire. The result was that in a very few minutes people flocked in the direction of the institution from all directions. The police-officers in the vicinity were equally alarmed, and whistles blew from every beat. In a very brief space at least twenty police-officers were in Bath Row, and information having been telegraphed to the Central Fire Station, the brigade, with the tender and steamer, were soon on the spot, under the command of Acting Superintendent Teviotdale. Happily it was not the Queen's Hospital that was in danger, but the stables, store rooms, and joiners' shops belonging to Mr. S. W. Fielding, builder, Bath Row. These buildings are only divided from the nurses' quarters at the hospital by a boundary wall and narrow passage, and thus the alarm that the fire was of a far more dangerous character. The builder's premises were locked up safely at six o'clock in the evening, but the fire must have started pretty early, for when it was discovered the roof and building generally were wholly in flames. While one policeman ran into the hospital to give the signal by telephone some young men opened the stable door and rescued two horses. Inspector Clarke was in command of the police force, and, with great thoughtfulness he ordered the hospital yard to be cleared of people so that none of the inmates might be disturbed. The nurses watched the scene from the windows of their home, and the residents of Bath Row whose houses fronted Mr. Fielding's yard were watching the illumination from their rooms. The burning building was about 60ft. long by 25ft. high, the stables and storerooms being in the basement, and the joiners' shops in the upper storey. The shops and storerooms were filled with manufactured goods and expensive timber in the process of drying. Nothing could be saved from the premises. Before the brigade arrived the roof had fallen in, and by the time the steamer had been at work half an hour the fire had practically burnt itself out. About half-past twelve the gable-end of the building, which was in a very unsafe condition, was razed to the ground, and the brigade were enabled to leave the scene of the fire between one and two o'clock. It was fortunate in many respects that the wind was blowing strongly in the direction of Bishopsgate Street. The flames, consequently, were carried away from the Queen's Hospital, but the sparks fell in large quantities on the adjoining portion of the institution. Great care, however, was taken that the patients were not alarmed, and the majority of them were kept in ignorance of the fire which was burning so steadily close to them. The damage to Mr. Fielding's property will amount to about £500., and, in addition, there is damage to the gutted building, which belongs to Mr. W. I. Jones, Wellington Road. The property and buildings are insured in the Phoenix Fire Office."
"Alarming Fire in Bath Row"
Birmingham Daily Post : December 30th 1890 Page 4