History and Information on Bennett's Hill at Birmingham in the County of Warwickshire.

Some history of Bennett's Hill 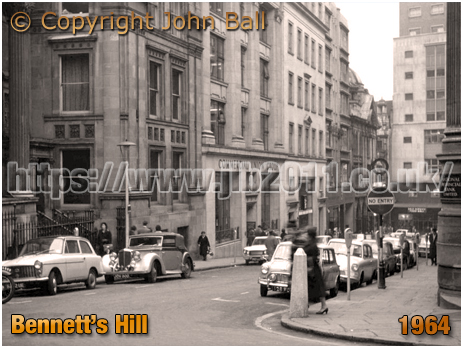 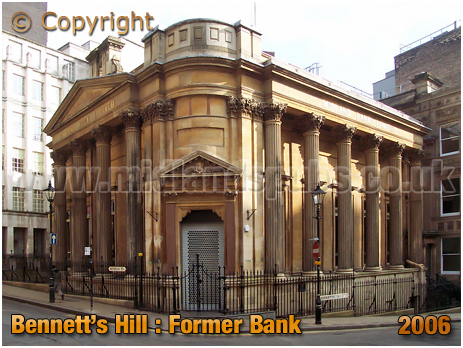 If you have a genealogy story or query regarding Bennett's Hill you can contact me and I will post it here in addition to including your message within the website pages for Birmingham Genealogy.

If you would like to share any further information on Bennett's Hill - perhaps you drank in one of the pubs in the past? Or maybe knew a previous publican running one of the boozers? Whatever the reason it would be great to hear of your stories or gossip. Simply send a message and I will post it here.

"At the Birmingham Police Court, yesterday before the Mayor [Alderman White] and Messrs. Chamberlain and Elkington, Ernest Stanbury, a law student, of Bennett's Hill, appeared in answer to a summons charging him with having assaulted James Billingham, collector of Queen's taxes, 13, Bennett's Hill. Mr. Edward Eaden appeared for the complainant, and defendant conducted his own case. There was also a cross summons taken out by Mr. Stanbury charging Mr. Billingham with an assault. Mr. Stanbury, who held in his hand a bunch of violets, which he twisted and twirled and held to his nose when in his most animated moods, objected to the jurisdiction of the Court on the ground that a writ had been served on Mr. Edge, who owned the premises where the alleged assault took place, and the case was proceeding in the High Court of Justice.

The Mayor said the case must proceed. Mr. Baden then said it appeared that Mr. Billingham was assistant collector of taxes, and acted with his wife as caretaker of offices, 13, Bennett's Hill. On the night of the 13th of September, about a quarter to eleven, complainant was asked by Mrs. Dorney, the caretaker of 21, Bennett's Hill, to go into the latter premises, and persuade the defendant, who occupied a chamber in the building, and persisted in remaining in the room at night, to leave, He [Mr. Eaden] must tell the Bench that the defendant had occupied a room in Mr. Edge's chambers in Bennett's Hill, under an agreement by which he was not to use it on Thursdays. The 13th of September was a Thursday. To the persuasions, he replied that he should not go, and should remain there on Sundays, or any other time. Mr. Stanbury was a man of considerable physical power, and neither Mrs. Dorney nor her husband attempted to turn him out. They went to Mr. Billingham and asked him to persuade the defendant to leave. Mr. Billingham. went over to 21, Bennett's Hill, and saw the defendant. He did not use any aggressive action towards him, but simply used all the persuasion he could to induce him to leave. Defendant immediately asked him if he was a police officer, and he replied in the negative. The defendant at once rushed at him and hit him several times on the head and face, causing blood to flow, and it was with difficulty that Mrs. Dorney and her husband dragged him from the room, as he was partly insensible. Afterwards a constable was called in. Mr. Stanbury was a person of very violent temper, and not only attacked the complainant, but actually threatened to shoot the police officer.

James Billingham corroborated Mr. Eaden's statement. He said he went over at Dorney's request to persuade Mr. Stanbury to leave. Defendant struck him some severe blows, which rendered him partially insensible. Witness offered no violence. Witness was cross-examined at great and tedious length, the Bench having several times to point out that his questions were irrelevant. Charles Dorney gave confirmatory evidence. The Mayor several times asked defendant to have some regard for the time of the Bench, and keep himself to the point. Defendant warmly asserted his right to conduct his case as he chose. He protested against any interference from the Bench.

Mrs. Dorney was also called in support of the summons, and spoke to the violence offered to Billingham. Police Constable Price was the next witness, and said he found Billingham bleeding when he was called to the offices. When witness went to the door to speak to Stanbury, the latter said he would shoot the first person who came into his chambers. Defendant refused to open the door for anybody, as he said the chambers belonged to him and to no one else. Suddenly there was a great rumbling noise behind the door as if a table was being placed against it. Mr. Stanbury put a number of questions to the constable with the object, he said, of showing that he was not a credible witness. The Bench said the questions were not to the point, and called upon defendant to address the Court in his defence. Defendant [excitedly] I will not have the case hurried over in this way. I protest against having incorrect statements bandied about in every blackguard's mouth without contradicting them.

Mr. Stanbury, in his defence, stated that he was the legal tenant of the chambers, subject on Thursdays to the occupancy of Messrs. Holbeche and Addenbrooke, and not only that, but at all times on Thursdays when Messrs. Holbeche and Addenbrooke were not occupying. On the Saturday previous to the Thursday on which the alleged assault took place he went to the chamber and found that it was locked. Mr. Edge before that had told him that he would take possession of the chambers, though he [defendant] had no intention of giving them up. His first impulse was to break down the door, but he controlled himself, and endeavoured to get a peaceable entry. He failed in that and went away. From the Saturday to Thursday he was unable to come into town, but about five o'clock on Thursday evening, when he knew that Messrs. Holbeche and Addenbrooke had left, he walked into his chamber in a quiet way and entered into possession. He thus put on the people who had set at defiance all gentlemanly conduct and the laws of the land the onus of the subsequent proceedings. At half-past five he was surprised to hear a key turn in the lock, and found that he was locked in. He was then reading quietly, and the Bench no doubt could understand his natural feeling of indignation, especially when they were aware that he knew this was done by Mr. Edge's orders. Under the circumstances they would find that he had really a wonderful command of his temper - he knew when he was roused he was a man of a different sort. He therefore kept quiet and said nothing about it, and remained in the locked chamber from 5.30 till about nine o'clock without disturbing or being disturbed. About nine o'clock Mrs. Dorney knocked at the door and asked him to go away, and he naturally refused to do so, and told her to go away. Mrs. Dorney insisted on his going away. He did not wish to get excited, as he knew he would if he argued with the servant. He endeavoured to get quietness by putting out the light. When he did this Mrs. Dorney went away, and he remained in the darkness till close upon eleven o'clock that night, though he had not had his dinner. He then called Mrs. Dorney, and said if she would open the door and give him the key he would go away. Mrs. Dorney refused to give up the key, and then said she would if he would open the door. She accordingly opened the door, and just as she did so, the room and the passage being quite dark, Billingham rushed in and tried to put him out. Billingham was a mite of a fellow, it was true, but it was no wonder, being surprised in the dark, even by such a mite, he was frightened and excited. He shrieked "Go out," and Mrs. Dorney said, "Hush, Mr. Stanbury;" but he shrieked again that he would not hush, but would raise the whole town. When he had put Billingham out the policeman came, and he would show before the Watch Committee that Price had perjured himself. He had now told the truth, and did not care what the Bench did, only he told them they had no jurisdiction in the case. Defendant here called for Stone's Justices' Manual, and from it quoted a passage which recited that justices had no jurisdiction in assault cases which involved any question as to the title of any land or tenement. On this, after a long argument, the justices held they had no jurisdiction, and the case was dismissed, with costs.

The charge of assault Mr. Stanbury said he was not prepared to defend himself, as he was in a weak and sickly condition, and he also asked the Bench to adjourn the court for luncheon. The magistrates, however, refused to accede to the application. Mr. Eaden said that, assuming the last case had turned out otherwise, he should have said that if for the sake of peace Mr. Stanbury could have been induced to give up the office, although no rent had been paid, the matter should have been at an end. It was well known all over the town that he had the character of being a man of the greatest violence. He [Mr. Eaden] could go so far as to say that witnesses would come down to the court but they were in fear of their lives. Mr. Eaden added that if Mr. Stanbury would undertake not to go to these premises again he would not go on with the case. Mr. Stanbury [excitedly] : No, sir; if you were to give me £20,000. I would not do it. After a short discussion between the magistrate and the defendant, Mr. Edge, the prosecutor, was called. He said on Monday evening last he saw Mr. Stanbury at his office in Bennett's Hill. The door was being repaired and Mr. Stanbury took up one of the carpenter's axes and threatened "to do for" witness, and flourished the weapon over his head. He then smashed the window with the axe, remarking that he was in his own chamber and should break the window if he thought proper. He was then in fear of personal violence, and was still afraid of the defendant. The defendant cross-examined witness at considerable length; after which the Bench said they were satisfied that a threat had been made. Corroborative evidence having been given by Herbert Nicholls, the complainant's clerk, Mr. Chamberlain said, the magistrates thought the threats had been proved, and they required the defendant to be bound over to keep the peace for six months - himself in £50. and two sureties of £25. each, or in default fourteen days' imprisonment. Defendant said he should not find the sureties "on principle," and would go to gaol in default. Two summonses against the defendant for wilful damage were withdrawn. Not finding the sureties, Mr. Stanbury was locked up. He at first behaved quietly, but whilst being placed in the prison van, became very violent. His unruly conduct continued until he arrived at Winson Green Gaol."
"Exciting Scene in Bennett's Hill"
Birmingham Daily Post : October 12th 1883 Page 4