This section deals with the 20th century Brearley Street, a long thoroughfare that evolved from Lower Brearley Street, Brearley Street and Bridge Street West. This fusion of the streets occurred in the Edwardian period and remained until being chopped up during the redevelopment of the area in the 1960s and 1970s.

Brearley Street started [or finished, depending on your outlook] at the junction of Well Street and followed an east-south-easterly direction to New Town Row. The street therefore lay in the districts of Aston New Town and Hockley, plus that awkward bit in the middle that was on the edge of the gun quarter.

I have a few non-pub photographs that I have collected and acquired over the years so I will display these here with a few notes. 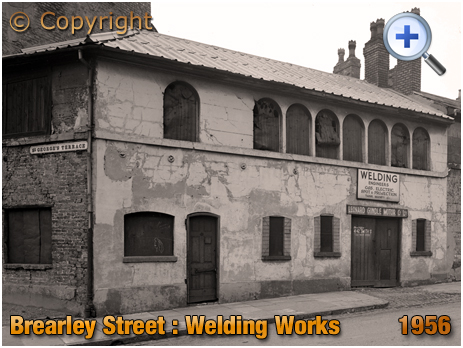 This photograph was taken in November 1956 from the junction of Hockley Street and shows the dilapidated properties on the edge of St. George's Terrace, the latter seemingly a pleasant green space in the mid-19th century. A tin roof has been plonked on the building housing the welding works of Leonard Gundle. The head office of the firm employing 30 people was based in Hockley Street. 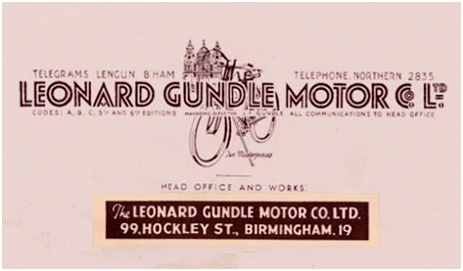 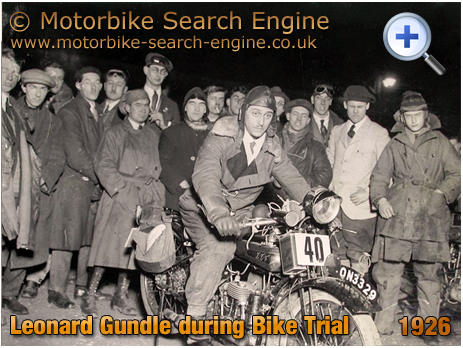 The proprietor's name was actually a bit of a mouthful. It was Leonard Frederick Gundle Gundlefinger. He was born in London 1901 to Bavarian parents, his father Isaac worked as a South African Export Merchant. Leonard Gundle started in business as a motorcycle manufacturer in 1926. In order to promote his machines, he competed in a number of trials. In the above photograph taken in April 1926 Leonard Gundle can be seen on one of his motorcycles during the London to Land's End Trial in April 1926 in which he gained a silver medal.

By 1930 Leonard Gundle had moved to Birmingham and into the production of cycle carriers. His machines were sold to corner shops, butchers, bakers and a whole variety of businesses where goods were delivered to the home. I guess nowadays they would be called cargo bikes.

Leonard Gundle continued to work until the age of 73 but decided to retire in 1974 when he sold the business to W. R. Pashley of Stratford-on-Avon, a company which, at that time, were the only other British firm specialising in carrier bicycles and tricycles. Sadly, Leonard Gundle did not enjoy a long retirement as he died in December of the same year. He and his wife Thelma had for many years lived in St. Augustine's Road at Edgbaston. 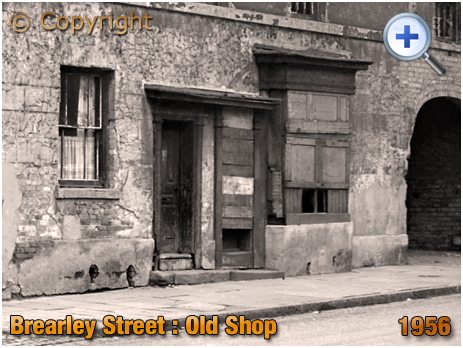 The tall building adjoining Gundel's welding shop was that of the Eagle Plating Company of No.1 St. George's Terrace. In this photograph the buildings adjoining the welding shop can be seen. When this photograph was taken they were numbered 253 and 251, the latter being on the right with the large entry. At the end of the Edwardian period the works later occupied by Leonard Gundle was the premises of the enamel maker and jewellery enameller Mary Littlehales. She lived out at Hamstead Road and commuted to Brearley Street each day. At this time the house seen here on the left was the home of the house painter and paper hanger Alfred Bembridge and his wife Sarah Ann. Earlier in the Edwardian period the shop premises seen here was occupied by the jewellers' case maker William Wood. In the 19th century the shop sold fruit and vegetables, the fruiterer in the early 1880s being John Jordan. In the late 1860s it was the shop of the butcher Thomas Garbutt.

In the following view the photographer would have been stood close to St. George's Terrace and is pointing the camera to show properties on the southern side of the street between Hockley Street and Well Street. 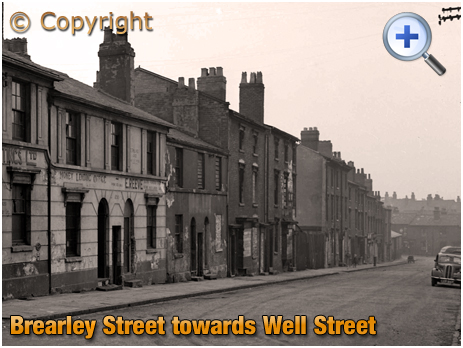 Towards the left of the photograph one can see the money lending office run by Hubble's during the war years. The firm operated in a number of locations around the city. The electro-plater Arthur Reeve occupied the adjacent property owned by John Burley. Along this stretch of Brearley Street there were two beer houses - the Red Lion and the Britannia Inn. There were three general shops for groceries and other domestic goods, one being run by the Bedworth family for many years. 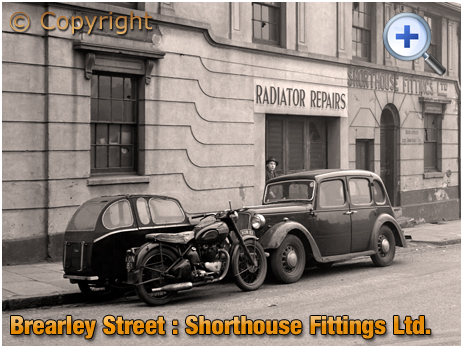 Apart from the old saloon car and motorcycle and sidecar combination, this photograph shows the premises of Shorthouse Fittings Ltd. which stood at Nos.256-260 Brearley Street. The firm specialised in motor body fittings and had occupied these premises for some years. At the end of the Edwardian period, however, there were three separate firms based here : Harvey & Mountford Jewellers, the clock bezel manufacturer Rowland Hill and the die-sinking business of Mills Brothers. 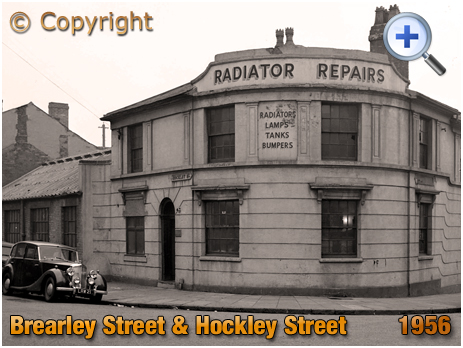 Radiator Repairs stood on the corner of Brearley Street and Hockley Street when this photograph was taken in the mid-1950s. A sign states that they offered radiators, lamps, tanks and bumpers. The manufacturers Harvey & Smith had occupied the site during the Second World War. In earlier times the paper box-making firm owned by Richard Beauclerc traded from this corner position. He commuted into town from his family residence on Crocketts Road at Handsworth. 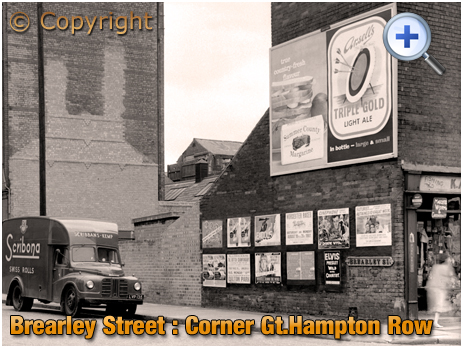 This photograph from 1961 shows the corner of Brearley Street and Great Hampton Row. The fishing tackle shop to the right of the photograph was at No.69 of the latter. The wall of the premises in Brearley Street seems to have been a key advertising station for the cinemas of Birmingham. The choice for film fans at this time included "Spartacus," "Exodus," "La Dolce Vita," "Whistle Down The Wind" and "Guns of Navarone." The latter film had been retained for a 10th week at The Futurist. The van parked up has Scribona Swiss Rolls emblazoned on the side, cakes that were made at Scribbans-Kemp at Corbett Street in Smethwick. 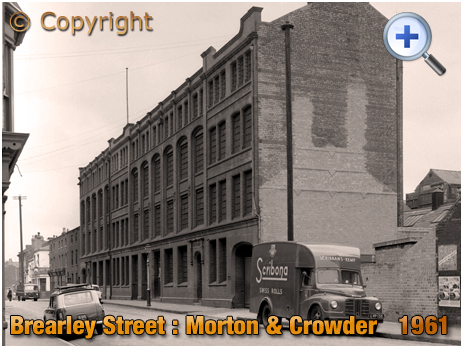 This photograph shows the same bakery van but with the large works of Morton and Crowder which loomed over Brearley Street. Formerly based at Lodge Road, the company was incorporated in July 1896. When this part of the city was cleared the firm relocated to Kitts Green where they continued to produce studs, cuff-links and other clothing items, along with fasteners for cars, aircraft and railways. 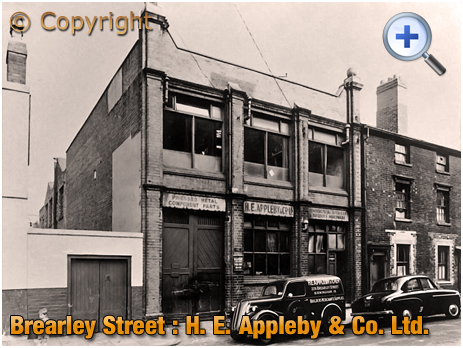 On the opposite side of Brearley Street was No.229, the premises of H. E. Appleby & Co. Ltd. The van parked outside states that the firm were suppliers to the building trade. However, the firm were sheet metal workers. They had formerly shared these premises with E. P. Thompson & Co. Ltd., screw manufacturers and also George Wheeldon Limited, stampers and piercers. H. E. Appleby & Co. Ltd. used to have the slogan "You Want It - We Can Make." Brewing once took place near this site during the Edwardian era when Kendrick Brothers operated in Brearley Street. 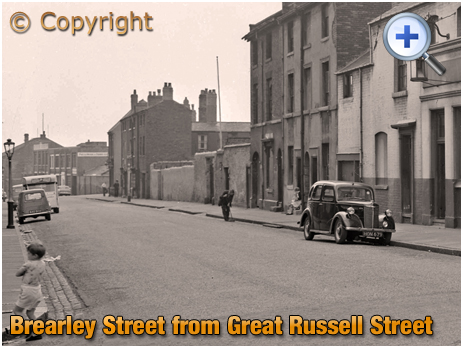 In capturing this view, the photographer was stood on the corner of Great Russell Street and pointing the camera eastwards. On the right is a section of The Compasses public-house. In the distance the Rose and Crown can be seen on the next corner, that of Hospital Street. There are gaps here, a legacy of bomb damage during World War 2. Beyond the saloon car on the right there is a man sweeping the gutter. A woman is sat on the doorstep of No.186. During the war when bombs were landing in this street that house was occupied by Thomas and Beatrice Dipple, along with their daughter Beatrice. The property next door at No.184 was the premises of Jabez Bate & Co. Ltd., electric cooking and heating apparatus manufacturers. 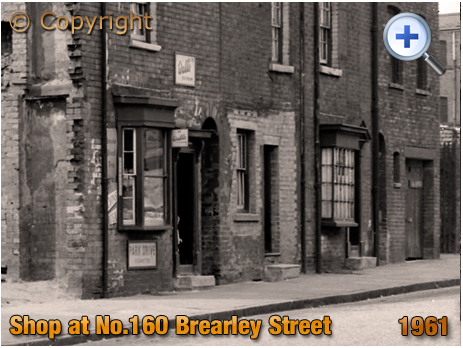 From the last image, the photographer has continued along Brearley Street passing the empty spaces to a short row of properties that survived the Second World War. The tobacco and sweets shop on the left was No.160 Brearley Street. It looks as though only one shop is trading here in the early 1960s but the property a few doors away at No.164, seen here with the bay window a couple of doors to the right, was also a sweet shop during the war. When the bombs dropped on Brearley Street, particularly on October 16th 1940, the sweet shop was run by Catherine Middleton. The 80 year-old shopkeeper must have been terrified when all around her shop properties were being destroyed. Henry and Cissie Dillinger were the occupants of the shop in the foreground and I cannot imagine how they felt when the adjoining house was bombed, probably shaking their house violently. All that could be seen of their neighbour's house in later years was the fireplace on the first floor, seen here at the extreme left of the photograph. 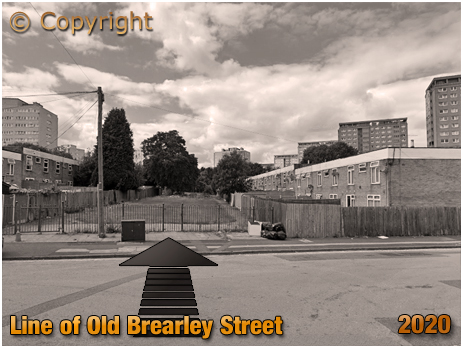 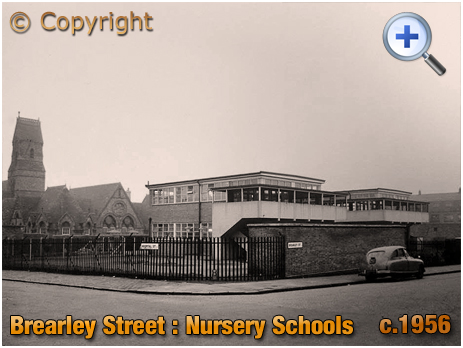 The Nursery School can be seen here with the gothic tower of Summer Lane School in the background. The old Summer Lane Nursery School was originally a private kindergarten for children of the district. In 1913 it was taken over by the city but the shabby and ancient rooms were deemed inadequate. This corner plot, formerly occupied by back-to-back housing was vacant and work got underway between 1938-9. Credited as the first modernist building in Birmingham, the Nursery School was designed by William T. Benslyn who had offices on Easy Row. He had succeeded Herbert Tudor Buckland as architect to the City Education Committee. Whereas Buckland was renowned for his Arts and Crafts structures, Benslyn transitioned from Art Deco to Modernist during his career. However, his own residence in Charlotte Road was both reserved and traditional.

A reporter for the Birmingham Daily Post, on visiting the recently-completed school, wrote: "this new building might belong to those magazines that illustrate - or used to illustrate - architectural achievements on the Continent. It might be a Dutch design, or a French. A low pale brick central block is flanked by two protruding wings. Concrete and glass are the chief materials. The roofs are flat. The upper floor juts beyond the lower, and is supported by pillars to make a sheltered terrace below." Andy Foster clearly likes the building and wrote: "the wings look like 1965, with cantilevered concrete balconies and flying staircases. Floating top canopies now glazed in. Only the central brick entrance hints at the real date."

The school was meant to open on September 23rd, 1939 but the children had been evacuated to Blackwell, to a camp school, and they remained there for a year before slowly drifting back to Aston New Town. Even after the nursery school officially opened the top floor remained unoccupied as it was considered that it would take the children too long to descend the stairs and along to the air-raid shelters at Summer Lane School. 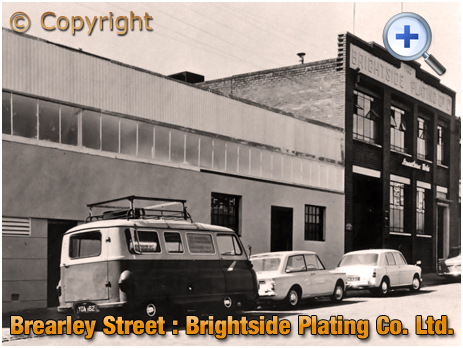 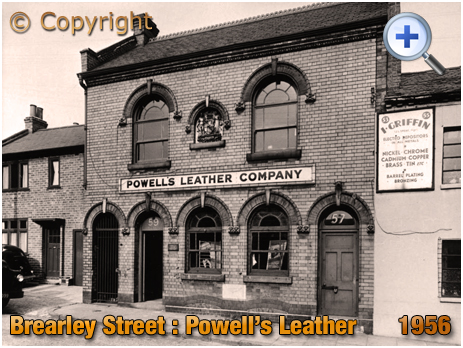 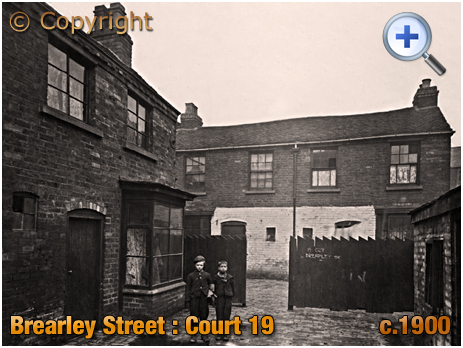 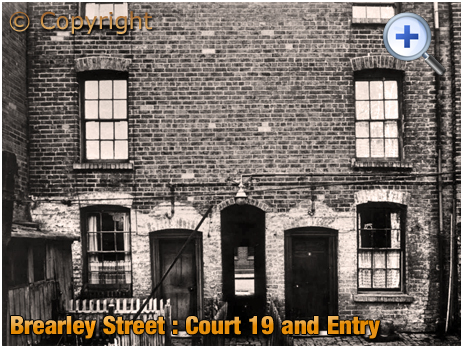 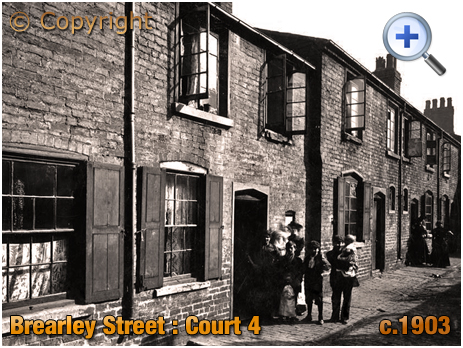 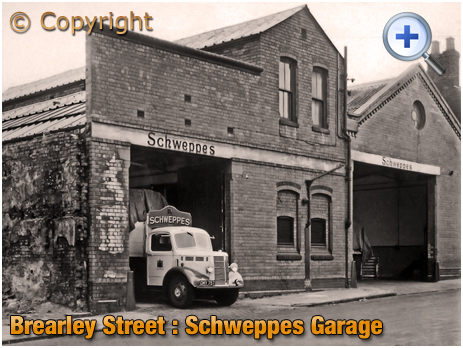 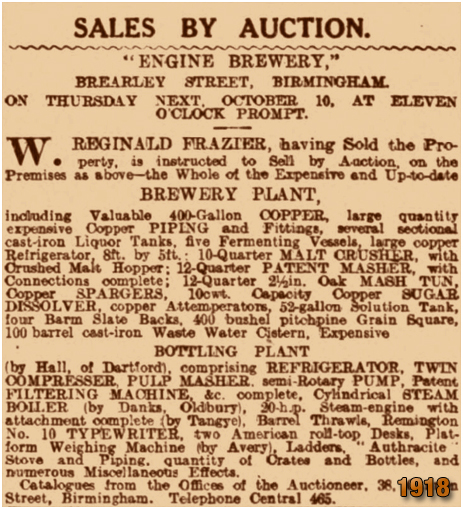 "On Wednesday, Mr. Henry Sheath, provision dealer, residing at No. 28, Brearley Street, Summer Lane, committed suicide in a most determined and deliberate manner. Early in the morning he left his bed, and did not return, but as he had been in the habit of sometimes sleeping on a sofa in an adjoining room, Mrs. Sheath took no notice of the matter. As morning wore on, however, it was discovered that he was not in the house, and a search was made in some of the adjoining out-houses. Not finding him, his friends sent to a shop which he had opened in the Lozells, but he had not been heard of there. Ultimately a slaughter house adjoining his own house in Brearley Street was entered, and the unfortunate man was found hanging by the neck from a hook in the ceiling. The rope was tightly tied round the neck, and a small bucket, which he had mounted to get the rope adjusted, was lying near. Mr. Hands, the assistant of Mr. Prosser, surgeon, Brearley Street, was immediately in attendance, but life was extinct. Mr. Sheath had been in a depressed state of mind for some time, having been under the care of Mr. Prosser. It supposed that the anxiety connected with business affairs had preyed on his mind, and led the commission of the act, Mr. Sheath leaves a widow and a grown-up family."
"Shocking Suicide in Brearley Street"
Birmingham Journal : December 14th 1867 Page 3