History and Information on Broad Street in Ladywood and Edgbaston at Birmingham in the County of Warwickshire.

Some history of Broad Street 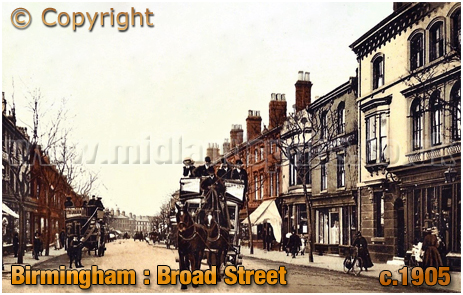 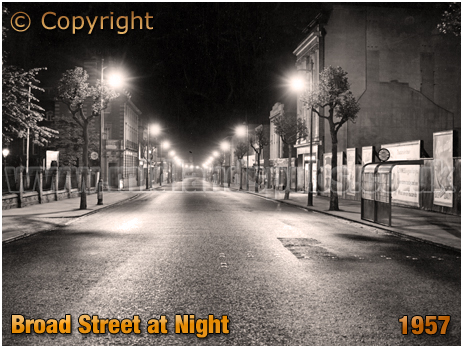 If you have a genealogy story or query regarding Broad Street you can contact me and I will post it here in addition to including your message within the website pages for Birmingham Genealogy.

If you would like to share any further information on Broad Street - perhaps you drank in one of the pubs in the past? Or maybe knew a previous publican running one of the boozers? Whatever the reason it would be great to hear of your stories or gossip. Simply send a message and I will post it here.

"The inquest was opened by the Birmingham City Coroner today on Elizabeth Watson [aged nine] of 28, Huston Street, Ladywood, who was one of four children knocked down by a motor van in Broad Street, on Tuesday, when returning home to lunch from school. In connection with the child's death, George Domville, of Berkeley Square, Coventry Road, was charged with manslaughter at Birmingham Police Court yesterday. He was present during today's proceedings with his solicitor, Mr. Howard Baker. The Coroner told the jury that the little girl was the daughter of Samuel Watson, a tube drawer, and was fatally injured in Broad Street on Tuesday morning while on her way home from school. Evidence of identification was given by the mother, Mary Watson, who said that the little girl had been in good health and had good eyesight and hearing. She attended St. Peter's School in Broad Street, and was on her way home for dinner at the time of the accident. Medical evidence was given by Dr. Lionel E. Jones. The child, he said, was admitted to the Queen's Hospital at 12.40 p.m. on Tuesday. She died 20 minutes later. She had abrasions on the right side of the forehead and the right cheek. She was also suffering from cerebral concussion and shock, the two factors which caused her death. The Coroner told the jury that this was all the evidence he was going to call today. He had been informed by the Clerk to the Justices that George Domville had appeared before the Stipendiary charged with causing the death of the little girl. In consequence of that charge in another court, he adjourned the enquiry until Friday June 9th."
"Broad Street Accident"
Birmingham Mail : May 18th 1939 Page 13