History and Information on Bromsgrove Street in Birmingham in the County of Warwickshire.

Some history of Bromsgrove Street

Bromsgrove Street was a key thoroughfare in and out of the markets of Birmingham centred around St. Martin's and continued from Moat Row in a straight line to Bristol Street. The trams would trundle along Bromsgrove Street before turning into Hurst Street. 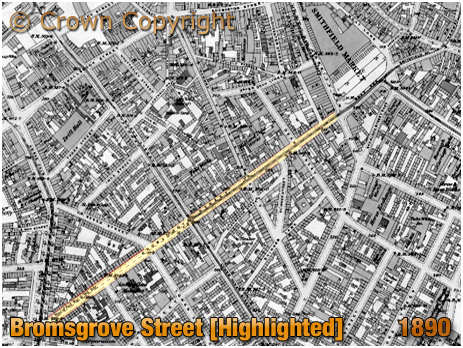 Although there were courts accessed from entries, the front buildings of Bromsgrove Street was largely devoted to business and commercial use. Naturally, a good number of public-houses lined the thoroughfare, the oldest being the Black Swan and the Dolphin Inn, the latter evolved into the Australian Gin Palace on the north-east corner of the junction with Hurst Street. 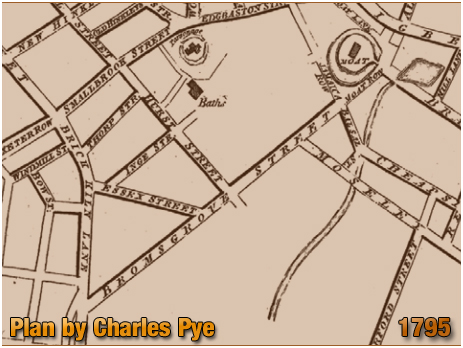 Bromsgrove Street is not featured on Westley's Map of Birmingham produced in 1731. It is not drawn on Samuel Bradford's Plan of 1751, though it is possible to see field boundaries on which the road was probably laid out in later years. A road is distinguishable on a 1779 Plan by John Snape and the whole street is shown on Charles Pye's plan dated 1795. 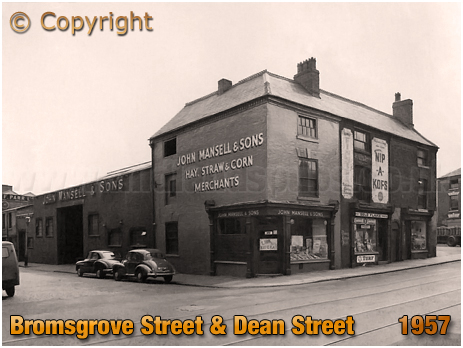 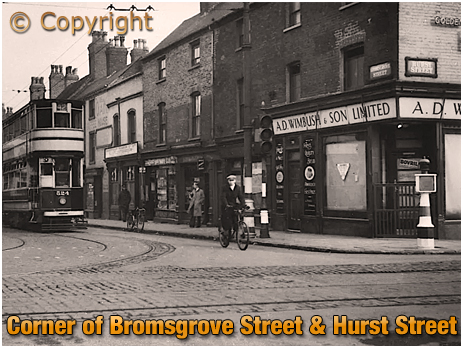 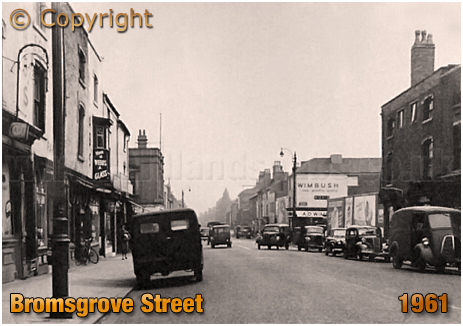 If you have a genealogy story or query regarding Bromsgrove Street you can contact me and I will post it here in addition to including your message within the website pages for Birmingham Genealogy.

If you would like to share any further information on Bromsgrove Street - Whatever the reason it would be great to hear of your stories or gossip. Simply send a message and I will post it here.

"Before the Birmingham magistrates yesterday, Martin Morris, James Thorn, and William Beach, of Valley Lane, were charged with causing grievous bodily harm to a man named Edward Hunt. Mr. Willison appeared for the prisoners. The evidence for the complainant showed that there was a disturbance in Bromsgrove Street on Sunday night, in which the prisoners and one or two women were concerned. Hunt alleged that Beach stabbed him with a knife in the arm, and struck him a violent blow on the shoulder with his fist, knocking him to the ground and dislocating his shoulder. While on the ground the other two men kicked him about the body. Beach was called for the defence, and said it was a general brawl, in which about twenty people, who were all drunk, took part. He did not stab or hurt Hunt. Pokers, pieces of iron, and all sorts of weapons were used. The other two prisoners told the same story. Sir John Holder, chairman of the Bench, said the evidence was not strong enough to convict the prisoners."
"Bromsgrove Street Row"
Birmingham Daily Gazette : April 14th 1908 Page 7