History and Information on the Bull Ring at Birmingham in the County of Warwickshire. 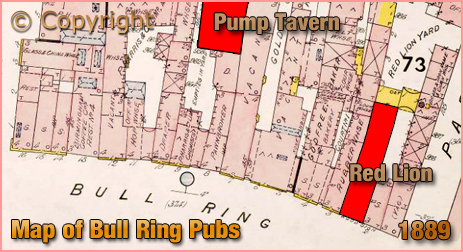 I have marked the locations of the Pump Tavern and Red Lion on this plan extract dated 1889. The Pump Tavern was to the rear of Number 8 and did not have a frontage to the Bull Ring.

Some history of Bull Ring 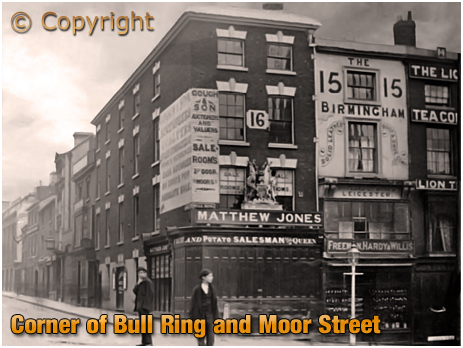 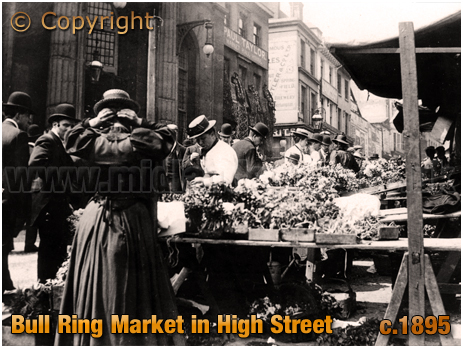 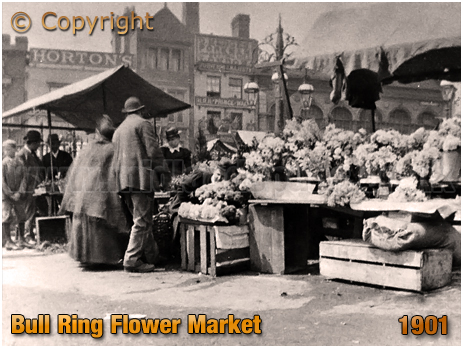 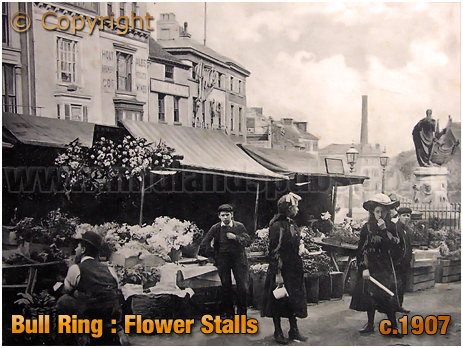 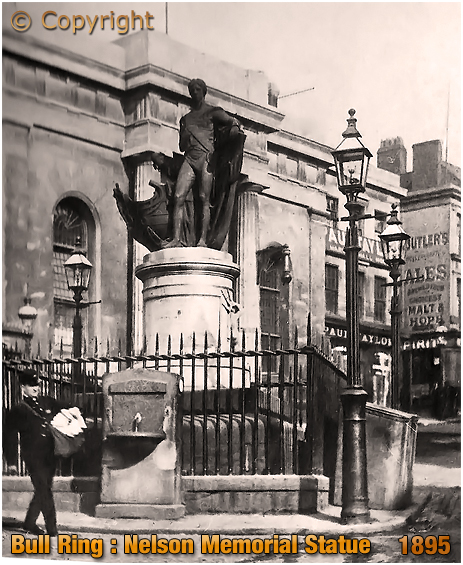 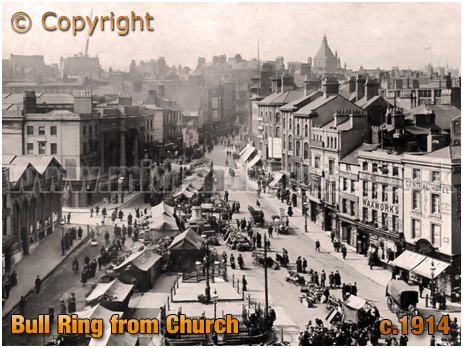 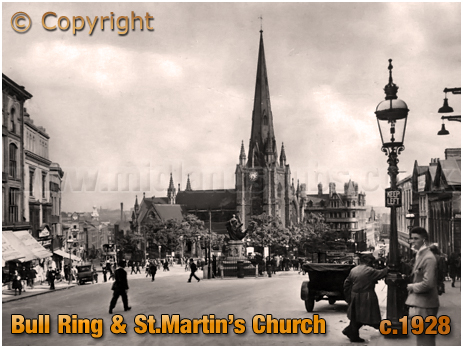 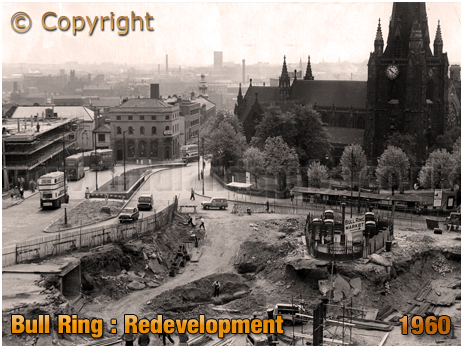 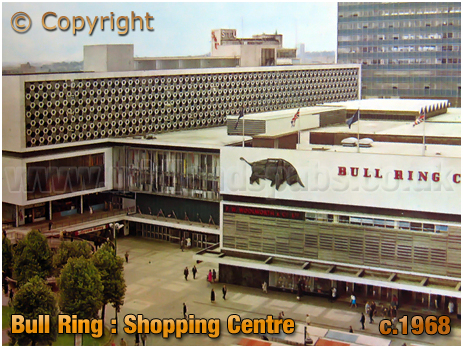 Street Scenes in The Bull Ring 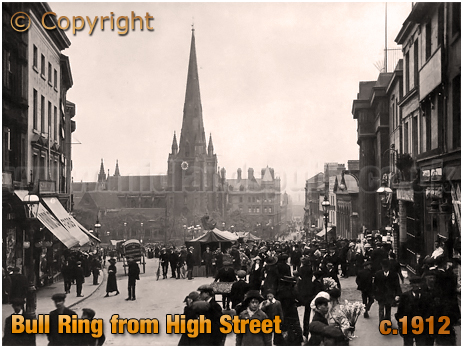 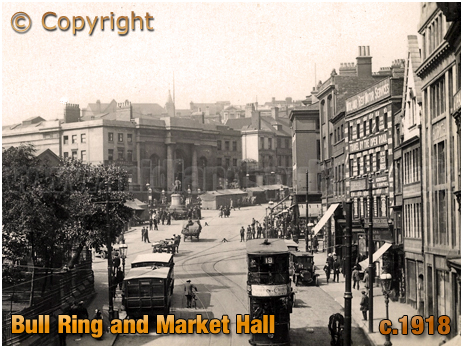 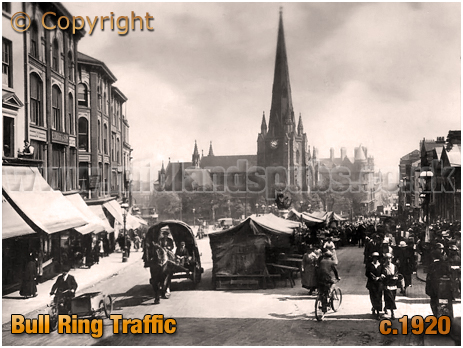 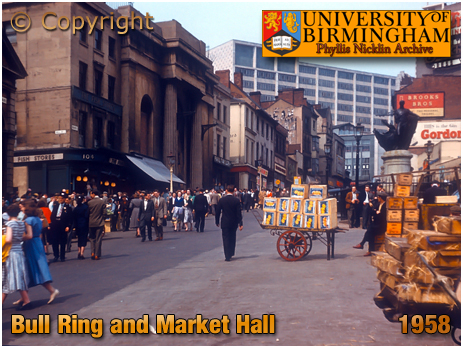 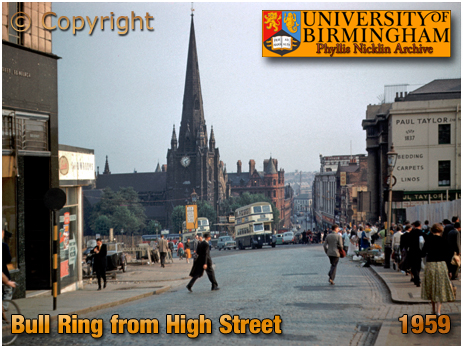 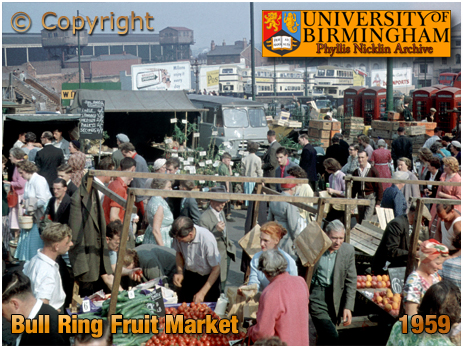 If you have a genealogy story or query regarding the Bull Ring you can contact me and I will post it here in addition to including your message within the website pages for Birmingham Genealogy.

If you would like to share any further information on the Bull Ring - Whatever the reason it would be great to hear of your stories or gossip. Simply send a message and I will post it here.

"Where Is the Bull Ring? The question is an old one, yet it remains a source of argument among readers and men who meet for a convivial half hour in "pubs" and restaurants. A census conducted recently [and privately] shows that nine out of ten Birmingham people do not know where the Bull Ring actually is situated. Many say that it is the space fronting the Parish Church where the open market is held and street orators hold forth. Others think that it runs from Park Street to Milk Street; but in both cases they are wrong. The Bull Ring runs from Moor Street to Park Street, and on the site now occupied by shopkeepers and warehousemen, bulls were actually baited and died. One of the very few premises actually in the Bull Ring is the licensed hostelry "Ye Redd Lyon" and this building is believed to be one of the oldest in Birmingham. Although it has been brought up-to-date, the old atmosphere still clings to the oak beams and panelling. The inn was a flourishing concern as far back as 1737 and is prominently identified with Prince Rupert, whose horse rode so desperately in the battle of Camp Hill. In this engagement the Parliamentary troops were urged on by a clergyman who acted as governor and who, on being captured, was taken to the "Redd Lyon" and put to death."
"Where Is The Bull Ring?"
Birmingham Mail : July 22nd 1939 Page 10

"A verdict of "Accidental death" was recorded at the Birmingham inquest today on John William Buckler [aged 7], of 9, back of 53, Skinner Lane, Birmingham, who was drowned in a static water basin in the Bull Ring on Friday evening."
"Boy Drowned in Bull Ring"
Birmingham Mail : April 24th 1945 Page 4

"Sir, it is known to most of my friends, that I was put into the dungeon at Moor Street, on the night of the Birmingham riot; and as I am often asked opinion of the fire, and for what I was confined, let me beg of you, sir, to insert the following in your paper for their information. I was home when informed of the fire, and, like a true Chartist, ran to aid in saving life and property. I had worked at an engine next to a man named Savage, of No. 8, High Street, a long time, under the direction of Mr. Lloyd, of Broad Street, when a fireman came from Mr. Bourne, and said 20/. worth of property might be saved in a few minutes. With the aid of a few men I was the first to follow him into danger. There was a policeman at the bottom the ladder, who said his name was Pew. I got over the balcony into the room, amidst water, smoke, and fire. The first thing handed to me was a chair. No one was behind me to take it, and I dropped it on the pavement. The next piece of furniture I took to the end of the balcony, corner of Moor Street, and left it. The people below then called on me to come down, so I descended well wet. I then went into Moor Street, and carried some paper out of the dirt into a shop on the opposite side. I then assisted in Mr. Bourne's back premises, but the things lowered down by the crane were not valuable - rice, soda, etc.; not a bit of tea came down all the time I was there. The stairs were wide, but the people came down empty-handed. Mr. Bourne at length told me to desist, and get more out. I then went with Mr. Bourne into the Bull Ring, to look at the fire, and a military officer came to Mr. Bourne and said, "I beg you will send my men no more drink, they will be unmanageable." Mr. Bourne said, if I would go with him to his warehouse, he would send them some tobacco. I went with him, and he told a man in his employ to fetch some tobacco out of the cellar. The man brought a handful of nice long tobacco, and Mr. Bourne told him to fetch more. He brought about two pounds. I put it into my jacket pockets. Mr. Bourne told me to fetch pipes from the Tamworth Arms, and say they were for him. I got all they had. I gave pipes and tobacco to the soldiers under arms. Lights were got from the burning property below the Nelson. A drunken watchman asked me for some. I refused, because Mr. Bourne had told me to give it only to the military. He then said to the police, "I give this man into your charge for stealing tobacco." I took the policeman to the warehouse, and he was told it was given to me for the troops. He took me to the Public Office, and the porter that fetched the tobacco went with me, to clear me. When I entered, a person with a pen in his hand asked my name. I told him, and he then told them to take me below. I was accordingly locked up until two o'clock the next day, and then liberated without admonition, reprimand, or being taken before a magistrate. The reason I was not taken before their worships I know not. Mr. Bourne sent over several times during the morning to get me liberated. What for? Why, because he did not wish the public to know of his generosity to the troops. Mr. Bourne's shop man was in readiness to receive the tobacco found upon me when I was liberated. He took it in my presence. I hope you will excuse the space I have taken. I remain yours, etc., Charles Smith, 19 Court, Slaney Street, Birmingham."
"The Bull Ring Riots"
Birmingham Journal : February 29th 1840 Page 7

"A Birmingham soldier just from the neighbourhood of Ypres suffering from a severe wound caused by shrapnel says that the Birmingham men settled down fairly comfortably in their trenches, and took pride in the arrangement of their improvised accommodation. "I lived in the Bull Ring for several days," he said, "and others of my comrades gave local names to their habitations. For instance, some resided in Pershore Road, others in Ashted, Saltley, and different parts of the city. Almost every part of a trench allotted us had its Birmingham name Many of the men, too, decorated their homes with flowers and shrubs which were gathered in a wood not far away, and which we more then once passed through when visiting the Germans with the bayonet. It was while retiring to our trenches after one bayonet charge that I dug a few roots and planted them in my trench. I had quite a nice garden, and was sorry to leave it, but a shrapnel bullet compelled me to."
"A Nice Garden in the Bull Ring"
Birmingham Mail : November 6th 1914 Page 1.