History and Information on Caroline Street in Hockley at Birmingham in the County of Warwickshire.

Some history of Caroline Street 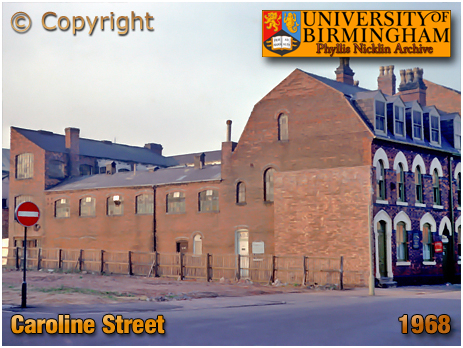 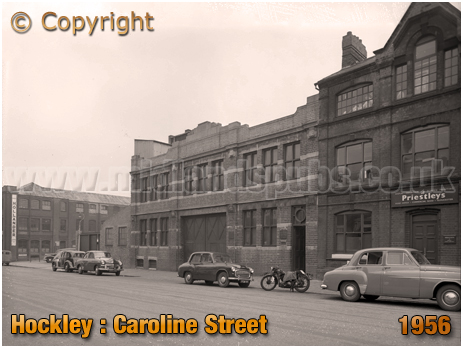 If you have a genealogy story or query regarding Caroline Street you can contact me and I will post it here in addition to including your message within the website pages for Birmingham Genealogy.

If you would like to share any further information on Caroline Street - perhaps you drank in one of the pubs in the past? Or maybe knew a previous publican running one of the boozers? Whatever the reason it would be great to hear of your stories or gossip. Simply send a message and I'll post it here.

"A fire which broke out in a small factory in Caroline Street, last evening, gave rise to some thrilling scenes, and resulted in the death of one of the occupants of the place. The factory is formed by two three-storey houses, Nos. 50 and 51, and is rented by Miss Ellen Hall, jewel-case maker. A room on the first floor, used as a store room, was the place in which the fire was discovered. The work people, most of whom are young girls, were at once alarmed, and notice of the fire was given at Kenyon Street Police Station. Redfern, the fireman on duty at the station, communicated the alarm to the Central Fire Station, and immediately set out himself, with Superintendent Shaw and a number of constables, to the scene of the fire. The fire in the meantime had spread rapidly, and among the large crowd which had assembled it was whispered that several of the work girls were imprisoned in a front room on the top storey. The escape was directed to the window of the room in question, but Redfern found it impossible to enter on account of the suffocating and blinding smoke which filled the house. Amid intense but breathless excitement, Redfern descended the escape, and, entering the house, tried again and again to reach the room in which the girls were believed to be. But the smoke on the staircase was more dense than it was in the room, and it was impossible to get to the upper storeys in this way. As the only resort left to him, Redfern determined to bring a jet of water to bear on the window. The hose was quickly attached to the main by the fireman and constables, and by the time they had got the jet to work Superintendent Tozer, with the brigade and a manual engine and tender, had arrived from the central station. At this point, however, the minds of the workers and spectators were relieved by the discovery that the girls supposed to be in danger had escaped from the building when the fire broke out, This feeling of relief, however, was immediately changed to one of renewed alarm; One of the girls working in the finishing room, a room on the second floor just over the store room, in which the fire broke out, was missed. The jets were at once directed onto this part of the building, and ladders being raised to the window of the finishing room, the terrible suspense of the onlookers seemed likely to be quickly ended. But another difficulty confronted Engineer Bellhouse and Assistant-Engineer Callaghan, the fireman who attempted the rescue. The iron-framed windows had such small openings that it was impossible for a man to get through them. The firemen, however, at length forced their way into the room, Lying on the floor was Florence Thompson, a work-girl, living in Monument Road, and aged only fifteen. She was quickly brought out by the firemen amid the cheers of the crowd. The usual efforts to restore animation were made, but without avail. Mr. Newton. surgeon, of Newhall Street, arrived in a few minutes and confirmed the opinion that the poor girl was dead, and her body was removed to Kenyon Street mortuary to await an inquest. She must have been suffocated soon after the fire broke out. Her companions had left the room, believing that she was following: them, and in the confusion they did not miss her afterwards. Now, however, they think that terror must have deprived her of consciousness, or at all events of the power of doing anything to save herself, until her escape was cut off by the progress of the flames."
"Fire in Caroline Street"
Birmingham Daily Post : January 5th 1887 Page 8