The White Horse Cellars was located on the corner of Constitution Hill and Northwood Street. Replacing an earlier White Horse, this building, dating from around 1890, is thought to be the only known public-house that was designed by the eminent architect Julius Alfred Chatwin, though the Old Joint Stock was later converted into a pub. He was responsible for many of Birmingham's new churches, along with additions to existing ecclesiastical buildings. His legacy in Birmingham is considerable. For example, he was reponsible for many of the buildings on Colmore Row. 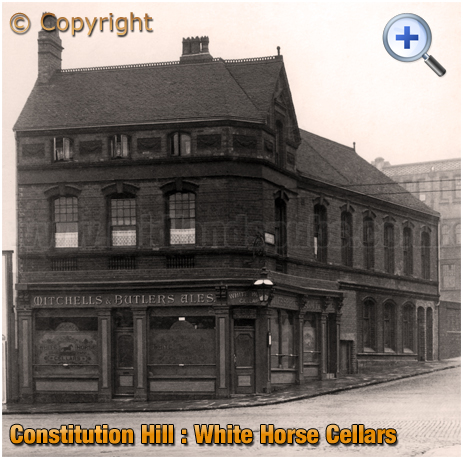 Another oddity of the White Horse Cellars is that it was once operated by Flower and Sons Ltd., the brewery based at Stratford-on-Avon. This is most unusual for Birmingham. The property was later acquired by Mitchell's and Butler's. Paying the sum of £1,250, the Cape Hill brewery first leased the property on April 18th, 1916. The company later acquired the freehold for £3,100 from the exectutors of J. P. Foster on September 15th, 1936. 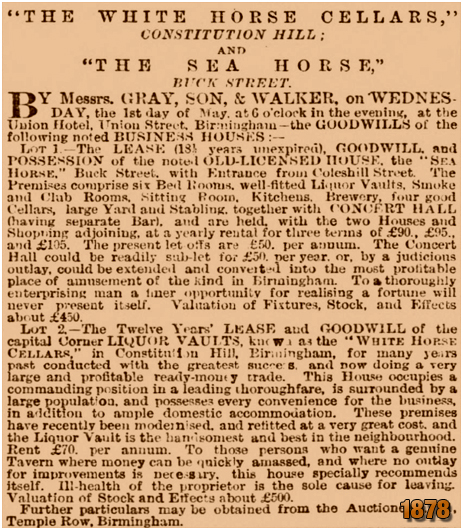 Licensees of the White Horse Cellars

"The greatest revolution in modern history was that caused by the railway movement. Stage coaching, though scotched, has never been killed. The game was kept alive by a few enthusiasts from the White Horse Cellars. Tomorrow, however, the stage coach is to supersede the railway in carrying certain mails. The terms of the Brighton Company being too high for the Post Office, Mr. Raikes has arranged with the proprietors of certain coaches to convey the night mails to the Queen of Watering Places by road. The first coach will depart tomorrow, and the event will be marked by an enthusiastic demonstration by the coaching people and others interested in horse flesh."
"A Revival of Stage Coaching"
Birmingham Mail : May 20th 1887 Page 2