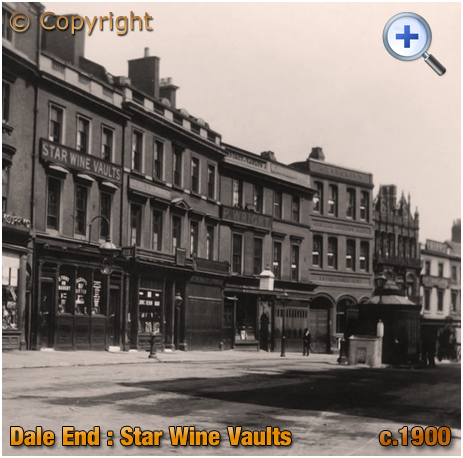 More information on The Star in Dale End to follow. I probably created the page as I had a link to The Star from another page. When building the site it is easier to place links as they crop up rather than go back later on. I realise this is frustrating if you were specifically looking for information on The Star. There is information on Birmingham dotted around the website - click here for a suitable starting place.

Licensees of The Star

"Sidney Walter Smith, licensee of The Star Vaults, Dale End, was sent to prison for 12 months at the Birmingham Quarter Sessions yesterday for receiving three rings and a watch knowing them to have been stolen. The Assistant Recorder of Birmingham, Mrs. Elizabeth Lane, said: "It is a tragic case for you, but the licensee who buys stolen goods over his counter must realise the danger. John Patrick Doyle [aged 34], of 283, Sherlock Street, who pleaded not guilty to stealing jewellery and property from the flat of Mrs. Beatrice Laird. of the Y.W.C.A. Hostel, Stone Road, Edgbaston, was sent to prison for six months, and David Johnstone Bittles [aged 34], of 96, Kenelm Road, Bordesley Green, who denied receiving jewellery, was sent to prison for nine months. After the men had been convicted, Mr. J. Owen, who had prosecuted. said that Mrs. Laird attached great sentimental value to certain of the items. Mr. Owen said that Doyle had alleged he had a companion who had taken most of the property. "If Doyle should see the other man again, perhaps he can do something about it. I do not think there is any other way of recovering it.' Doyle, in his defence, had said that he took only a pair of boots and a propelling pencil. Smith and Bittles both denied they knew the property was stolen."
"Prison For Licensee Who Received Stolen Rings"
Birmingham Daily Post : March 7th 1959 Page 9