History of the Barrel Organ on Digbeth in Birmingham in the county of Warwickshire.

Some history of the Barrel Organ

This pub later traded as The Tollgate and The Dubliner. 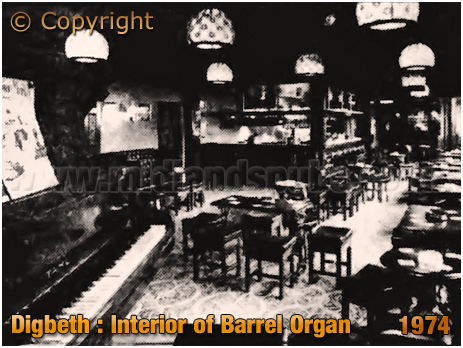 If you have a genealogy story or query regarding the Barrel Organ you can contact me and I will post it here in addition to including your message within the website pages for Birmingham Genealogy.

"One man was taken to hospital today after a massive blaze destroyed a landmark Birmingham pub. At the height of the blaze 120 fire-fighters tackled the flames ripping through The Dubliner in High Street, Digbeth, in the heart of Birmingham's Irish Quarter. A police spokesman said that around 12 people were believed to have been in the pub and all got out safely. But one man had been taken to hospital suffering from the effects of smoke. He said the popular pub had bed and breakfast facilities. The blaze broke out at about 4am and police immediately set up a huge cordon around the area as 15 fire crews were drafted in. The fire, which is being treated as "unexplained," filled the area with thick choking smoke as police were forced to set up diversions in preparation for the morning rush-hour. A spokeswoman said the diversions would be in place for several hours and could be in force all day while the fire was dealt with. The Dubliner pub is one of the main focal points of the Irish Quarter. Birmingham historian Carl Chinn said he was devastated by the news of the blaze."
"Historic Pub Destroyed in Blaze"
by Dave Lawley in Express & Star : July 26th 2006 Page 7.

"Four people have been arrested over the devastating fire at a landmark Birmingham pub. Fire completely destroyed The Dubliner pub in Digbeth last month. Main roads through the city were blocked off causing serious delays in and out of the city. Police and fire investigation teams launched an inquiry believing that the fire was started deliberately at the landmark pub. Today police said that they had arrested four people in connection with the incident. A 30-year-old woman, 26-year-old man and 35-year-old man, all from Birmingham, were arrested by police on suspicion of arson. All four have been released on police bail pending further inquiries. Louise Grifferty, spokesman for West Midlands Police, said: "We continue to pursue a number of lines of inquiry." Around 12 people living in the upstairs accommodation of the pub had to be evacuated from the building during the incident which happened on July 26, at around 4am. Up to 100 fire-fighters battled to bring the blaze under control."
"Four Arrested Over Blaze at Dubliner"
Express & Star : August 10th 2006 Page 11.

"Irish community leaders today said they would rally round to help restore the fire-wrecked Dubliner pub to its former glory. The pub, in Digbeth High Street, was gutted in a fierce blaze early yesterday. Twelve people in the pub were forced to flee for their lives as the fire tore through the landmark building and witnesses reported hearing explosions. Today, Patrick O'Neill, chairman of the Birmingham Irish Community Forum, said: "The Dubliner is a typical Irish pub and very much part of Digbeth." He added: "We would very much hope it continues to be the same pub. It is frequented by lots of Irish people and one of the 11 pubs in the area which are wholly Irish-owned." Paddy Finn took over the running of The Dubliner in the early 90s, changing the name from the Barrel Organ. It became a mecca for Irish folk bands and Irish dancing. The son of a boxer, Mr. Finn was a champion heavyweight boxer in Dublin, winning Ireland's Golden Gloves title. In the early 1990s he sponsored a local Irish dancing academy called the Scanlon School of Irish Dancing, which gave exhibitions to young and old every Sunday. Carol Scanlon, who set the school up, said she was deeply grateful to Mr. Finn and said the Irish community would rally round. "He came into that pub and he became everyone's person," she said. "He was very good to my dancing school." "We are going to rally round and help him. I have a lot of respect for Paddy." Before Mr. Finn took over, the Barrel Organ was renowned as a live music venue for new bands, and a magnet for students, punks and Goths. Birmingham-based band Ocean Colour Scene were one of the bands to appear there. Simon Delahunty-Forrest, former lead singer of a band called Cerebral Fix, which appeared there ten times, said if The Dubliner disappeared alongside nearby Reddington's Rare Records, it would be a loss to the city's music heritage."
"Pledge to restore pub ruined by blaze"
Birmingam Mail : July 27th 2006

"Punters raised a glass as one of Birmingham's most popular Irish pubs - devastated in a suspected arson attack - finally reopened after a huge refit. A dozen people fled for their lives from The Dubliner, in Digbeth High Street, as it became an inferno early in the morning 18 months ago. More than 85 firefighters spent hours tackling the blaze, which could be seen from miles away. The journeys of thousands of commuters were delayed as the normally busy area was cordoned off. Despite an extensive investigation by West Midlands Police into the "unexplained" fire no one was ever charged with the offence. One man was taken to hospital suffering from smoke inhalation in the drama. After six months of intensive building work, landlord Paddy Finn welcomed punters back to the new and improved pub, when he opened the doors at 11am yesterday. Mr. Finn, aged 47, said: "We will be putting on live music for our punters. It's nice to be opening again, seeing everyone and earning a shilling again. My regulars have been calling me on the telephone and looking in asking when it is going to re-open." The refurbishment is estimated to have cost brewery insurers more than half a million pounds, according to the father-of-five. "The place was gutted and we had to start from scratch," Mr. Finn said. "The bar was rebuilt and everything that was smoke damaged and had to be slung out. The toilets, tables, chairs, fixtures and fittings, photographs and all the kitchen utensils had to be replaced." Work is continuing on the nine-bedroom guest accommodation upstairs and remains shut for now. In light of the suspected arson attack, security has been improved and extra CCTV cameras have been installed inside and outside the pub."
"Toast to return of blaze-hit Dubliner"
Birmingam Mail : February 1st 2008