History of the Talbot Inn on Digbeth in Birmingham in the county of Warwickshire.

Some history of the Talbot Inn

The Talbot Inn was located at No.16 Digbeth, on the south-western side of the thoroughfare midway between St. Martins Lane and Upper Mill Lane. In Sketchley's 1767 trade directory for Birmingham William Chaplain was listed as the publican. In the directory published three years later there is another publican, Robert Hunt, two doors away at No.14. At No.23 there is also a publican named Joseph Locker.

This is what was left of The Talbot after being bombed in the Second World War. Ansell's simply put a lid on the remains of the ground floor and carried on trading! This was a temporary measure in order to retain the licence, along with keeping some presence amid the houses operated by Mitchell's and Butler's.

Ironically, the Luftwaffe did some of the demolition work that was planned for the building. In February 1939 Ansell's, or rather, the offices of what was left of the Holt Brewery Company made an application to remove the licence of The Talbot to "a house and premises to be constructed partly on the existing site of the Talbot, and partly on land immediately adjoining thereto." The last couple to run single-storey Talbot was Raymond and Kathleen Tumelty. The new building was opened in September 1959 as The Talbot but would later trade as the Bull Ring Tavern.

By the way, the remains of the former Talbot seen above was not the original Talbot Inn. A hostelry with the sign of the Talbot Inn stood at the 'top' of Digbeth for a couple of hundred years. 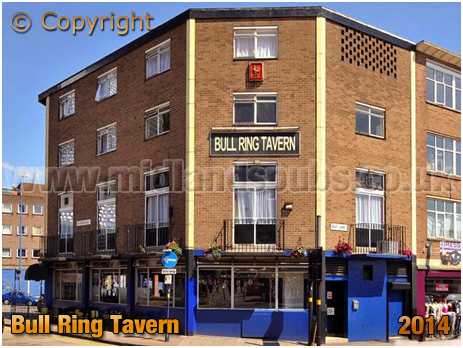 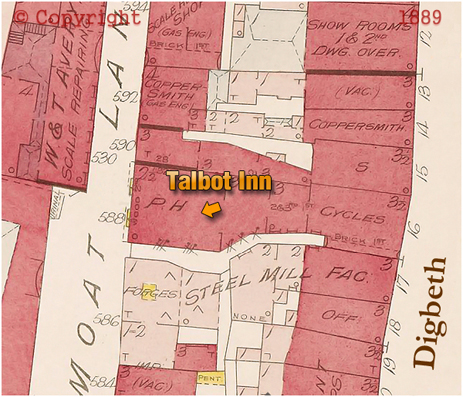 At one time the Talbot Inn extended across a site so that it had entrances in both Digbeth and Moat Lane. This plan shows that the frontage to Digbeth was altered so that a cycle store was occupying part of the premises. However, an entry allowed access to the pub from Digbeth. In later years, the pub fronted Digbeth again before being bombed in the Second World War.

If you have a genealogy story or query regarding the Talbot Inn you can contact me and I will post it here in addition to including your message within the website pages for Birmingham Genealogy.

"A pub licensee who battered a customer with a pick axe handle has escaped being sent to jail. Derek Organ who ran the Bull Ring Tavern in Digbeth assaulted drinker, Brynt Clayton, along with bar worker Amrit Chudasama after he was thrown out of the pub in the early hours of January 17. Police later checked CCTV which showed Organ leaving the pub, opposite the Bull Ring shopping centre, with a pick axe handle which he normally kept in his office. Prosecutor Paul Spratt told Birmingham Crown Court that the footage showed that there had been a "coming together" between Organ and Mr Clayton and the pick axe handle could been seen rolling away. "Unwisely he [Organ] retrieved it and used on Mr Clayton," said Mr. Spratt. "There are apparently at least six blows with it but fortunately the injuries sustained by Mr. Clayton were not as serious as they might have been." Mr. Spratt said Chudasama had left the pub at the same time as the licensee and that he had kicked the victim while he was on the ground. Organ, aged 54, who admitted assault and having an offensive weapon was sentenced to eight months suspended for two years. Chudaswama, aged 27, of Shaw Hill Road, Alum Rock, who pleaded guilty to assault, was handed a six month sentence suspended for two years. Recorder Unpward QC said the pair had acted "incredibly stupidly" on the night and that their victim could have been seriously injured. However he accepted the actual injuries were not that serious and Organ had "over-reacted to substantial provocation." He also accepted that Chudasama had played a lesser role. John McCormack, for Organ, said the defendant, who had been a licensee for some years, had lost his job. As a result of the incident West Midlands police suspended the pub's licence."
"Bull Ring Tavern licensee who battered customer with pick axe handle escapes jail"
by Ross McCarthy in Birmingham Mail : April 10th 2015