The Golden Horse was the oldest of the taverns on Duddeston Row. At least, as far as surviving documents reveal. The inn was trading by 1797 when William Thompson was the licensed victualler running the place. Chapman's trade directory published in 1800 listed the tavern at No.1 Bartholomew Row, the corner building fronting what would become Duddeston Row and Bartholomew Row. The licensing register for the early 19th century records the building in St. Bartholomew's Square. Subsequent formal numbering attached the property to Duddeston Row. 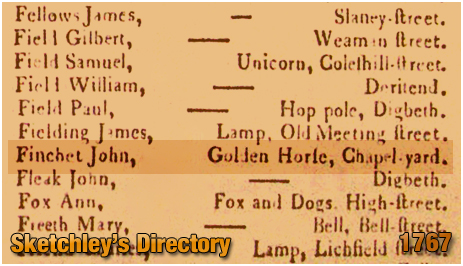 Going back to 1797 is solid in terms of documentation. However, I must mention that a Golden Horse is listed in the earliest of the town's trade directories. Sketchley's Directory published in 1767 has a Golden Horse at Chapel-Yard with John Finchet as the victualler. It is possible that this entry refers to this Golden Horse as Bartholomew Row adjoined the churchyard. This begs the question of whether it was the building on the corner of Bartholomew Row or was there an earlier Golden Horse and the licence transferred to a new building erected in the late 18th century? The tavern did not close until 1936 and the building survived until the clearance of the so-called Eastside development of recent years so we will never know the answer - as usual, Birmingham likes to eradicate its past so fecklessly. 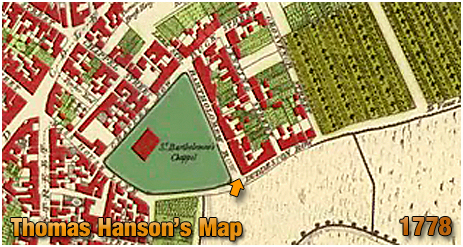 Thomas Hanson's Map, if accurate, does show the eastern side of Bartholomew Row being fully developed by 1778. I have marked the location of the Golden Horse on the corner of Duddeston Row. Earlier mapping does not show this level of development so if the entry within Sketchley's Directory of 1767 refers to this house then it was a relatively new building when John Finchet was recorded as the victualler. John Finchet is mentioned in the records of Saint Martin's Church. However, frustratingly, he is not included in the list of publicans within Sketchley's Directory of 1770. Indeed, I have trawled every page of the 1774 Swinney's Directory and the only listing for Bartholomew Row is the hop dealer William Walsingham. Of course, not all traders paid the fee to be included in such directories.

In the early 19th century William Thompson moved to the Mogul Inn, another tavern in Bartholomew Row, his successor being John Imms. He is possibly the John Imms listed in the marriage register at Saint Martin's who tied the knot with Mary Higgitt in October 1798. 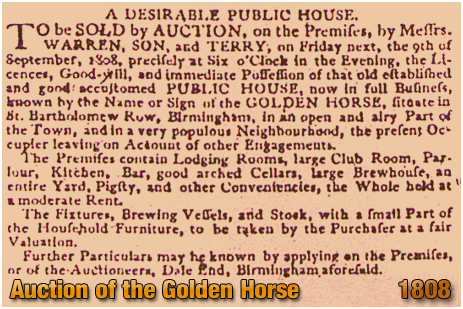 Jane Williams held the licence of the Golden Horse for just a year, as did Thomas Bellis. It was stated that he was "leaving on account of other engagements" within a notice of an auction of the house that was held on September 9th, 1808. The notice provides a glimpse of the property that included a bar, large club room, lodging rooms and good arched cellars.

Licensees of the Golden Horse