History and Information on Dudley Road at Winson Green in Birmingham in the County of Warwickshire.

Some history of Dudley Road

Traversing a section of an ancient heath, Dudley Road [also known as Oldbury Road in earlier times] is an extension of Spring Hill and connects with Cape Hill at the old Birmingham boundary with Smethwick. The route was used for transporting raw materials and finished goods between Birmingham and the Black Country long before the construction of the canals. Such heavy traffic led to the degradation of the road and, despite forming part of the Dudley, Birmingham and Wolverhampton Turnpike, it was described by the historian William Hutton as "despicable beyond description." Conditions improved when the road was maintained by the Birmingham Corporation in the 19th century.

The Old Dock Tavern, despite enjoying a short lifespan in the 19th century, was the oldest pub to trade on the turnpike road through Birmingham Heath. Most of the pubs along Dudley Road date from the 19th century though the Old Windmill is thought to have been an earlier farmhouse. Indeed, the area remained relatively rural in nature until the mid-19th century. There were still only a scattering of dwellings in the 1860s; most of the urban development really got going in the 1870s and into the 1880s.

Few historic buildings have survived at the Spring Hill end of the road and there is dilapidation to be found in many other sections of the thoroughfare. The story is even worse in terms of public houses - the Old Windmill was defiantly hanging on in 2010 and remained the last pub to survive. And here's the truly horrifying statistic - anyone travelling from the former M&B brewery at Cape Hill to Birmingham city centre will pass only this one surviving pub. Every other single boozer along Dudley Road, Spring Hill and up along Summer Hill and Parade has gone. Almost thirty pubs lost. A timely reminder perhaps to quote Hilaire Belloc, who said in 1911: "When you have lost your inns, drown your empty selves, for you will have lost the last of England." 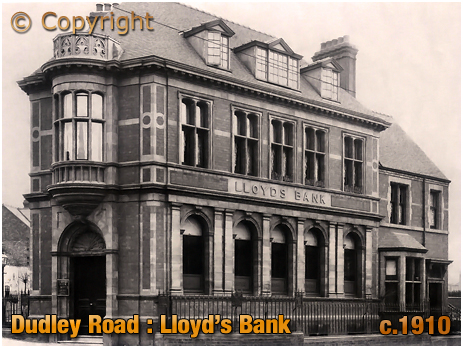 This photograph of Lloyd's Bank was taken soon after the building opened for business on the corner of City Road. The bank first conducted business on Dudley Road on December 3rd 1894 when a sub-branch was opened on the corner of Heath Street, on a site later occupied by the Lee Bridge Tavern. Howard Lloyd was the general manager of the bank. Lloyd's later secured a prominent site on the corner of Dudley Road and City Road where they put up this marvellous red brick and terracotta confection in order to trade at Summerfield. Edward T. Rudge was appointed manager of this new sub-branch. His son Harold was killed in the First World War. The former art student was a gunner in the Royal Garrison Artillery. He was buried at Lijssenthoek Military Cemetery near Poperinge in West Flanders. Selwyn Ivatts, an employee at this bank branch, served as a Second Lieutenant in the Royal Field Artillery. He was killed in action on October 8th, 1917, only days after he had been awarded the Military Cross. He was also buried near Poperinge at the Canada Farm Cemetery. Selwyn Ivatts was educated at King Edward's School at Five Ways. Prior to joining the bank, he worked as a chemist's clerk. His brother Edwin, who had studied to practice architecture, was killed on the Somme in August 1916.

If you have a genealogy story or query regarding Dudley Road you can contact me and I will post it here in addition to including your message within the website pages for Birmingham Genealogy.

If you would like to share any further information on Dudley Road - Whatever the reason it would be great to hear of your stories or gossip. Simply send a message and I will post it here.