History and Information on Farm Street in Hockley at Birmingham in the County of Warwickshire.

Some history of Farm Street

Farm Street used to run from Hockley Hill to Summer Lane. So, originating in Hockley, following a route just to the south of the Hockley Brook and joining Summer Lane in Aston New Town, this was a key route for Brummies. However, although it is possible to trace the old road along footpaths, a lot of the old street has disappeared. Virtually all of the historic buildings have been demolished. Of course, this has happened in many other localities but it's still a bit sad that such a lot of old character has been wiped from the map.

Farm Street was a street with a lot of vibrancy. A church, school, plenty of shops and a good selection of pubs amid a sea of housing made this a lively place in which to live. Sure, life wasn't all rosy but talk to people about this area and the conversation will echo of loss and a yearning for the old days.

Farm Street was formally developed during the 1840s. White's Trade Directory published in 1845 lists very little commercial activity; the awl blade maker Joseph Bembridge was trading near Hockley Hill, Thomas Hodgetts had a shop but the main listing is for the Birmingham and Staffordshire Gas Light Company's Station which was run by William Ballard. The only other person listed in Farm Street was John Walker. Towards the end of the decade there were more shops and businesses including the bakery and shop of John Boot, the clock maker William Gilbert, and a couple of greengrocery stores run by Elizabeth Hill and Edwin Pearce. There was the jeweller Cornelius Hollins and the brick maker John Gee, a man who also had a pub in Summer Lane. The family name suggests a strong link with the name of Gee Street.

The growing population was served by a church which was located on the corner of Wheeler Street. The building fronted the latter so is not covered in detail here. However, the building formed an important role for those living in Farm Street. The church was completed in the mid-1850s with a parish assigned out of St. George in the Fields. Damaged during the Second World War, the church was closed in 1948 and demolished four years later. 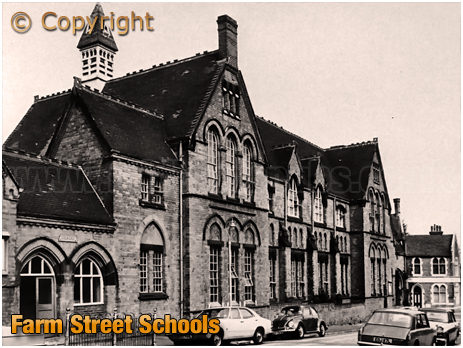 Along with the short journey for church services, it was a short school run for those living in Farm Street as a Board School was opened in the thoroughfare in 1873. The building had separate departments for boys, girls and infants. This divide was bridged in 1930. The school closed during the Second World War but was re-opened in 1949 as a Junior and Infant School. The building became known as the Hockley Junior and Infant School. The school was eventually closed in 1974 and the buildings were subsequently demolished. 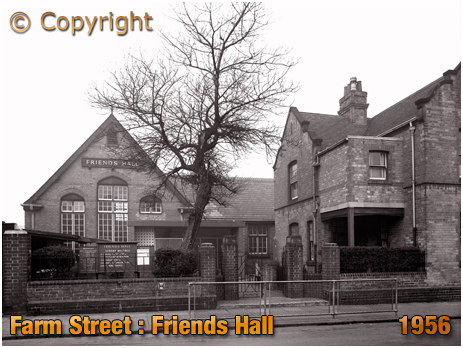 Another prominent building in Farm Street was the Friends' Hall which served a number of roles within the community along with being a venue for concerts and political meetings. The building was also used for Women's Adult School. 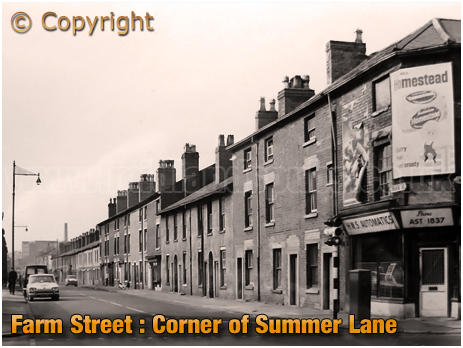 This photograph shows the junction of Farm Street and Summer Lane. Located close to the junction of Ormond Street, the camera is pointing in a westerly direction and is showing the north side of Farm Street. There were not many retail businesses between this point and Guildford Street, the land being occupied by high density housing with some back-to-backs between Farm Street and Cowper Street. Trading on the corner when this photograph was taken was H.W.S. Automatics. There had traditionally been a general store in this location. In the late 1950s it was run by Mrs. Ada Atkins. During the Second World War the retailer here was Mrs. Agnes Ashmore. 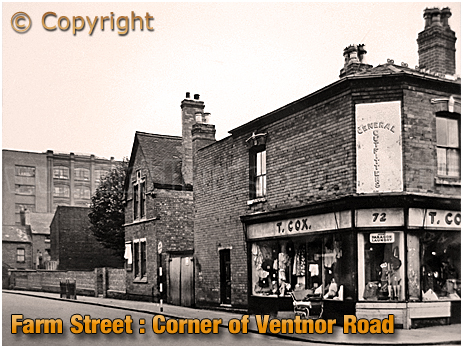 This photograph shows the junction of Ventnor Road, a later addition to the landscape as a result of infilling. The houses on the eastern side of Ventnor Road backed onto Burbury Street Primary School. Part of the Lucas factory can be seen to the left of the image. The Draper's Store on the corner was operated by T. Cox. It may have been a lock- as No.72a was occupied by Vernon and Mabel Tonkinson. The shop had been a drapery for many years. In the Second World War the business was operated by Alfred Phillips. 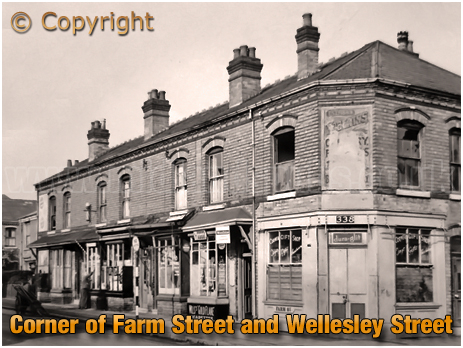 There were a row of shops near the junction of Wellesley Street. On the corner at No.338 and advertising the new-fangled Dura-Glit was the Corner Gift Shop. However, it had not been long since this was a small furniture outlet run by Mrs. Alice Woodward. Traditionally however the property had been a grocery store. During the Second World War it was run by Miss Nellie Constance Taylor. This was at a time when the adjacent tobacconist's was run by Mrs. Ellen Whitehurst. She kept the shop for many years and was still there in the 1960s. I believe that she was helped by her daughter, also named Ellen. 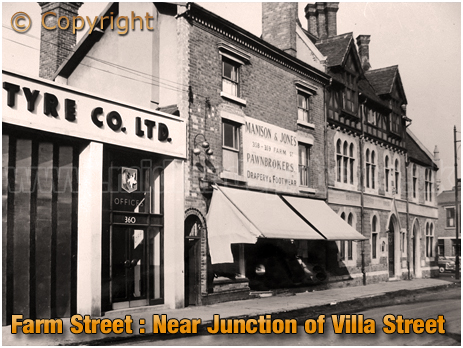 This view of Farm Street shows buildings and businesses close to the junction of Villa Street. The first building was a branch of the Michelin Tyre Company Limited. Next door was the pawnbroker's shop operated by Manison & Jones. Surviving into the 21st century, the large building on the corner of Villa Street was, at this time, occupied by the dentistry run by Hans Friedrich Reichenfeld. The building had formerly been the Hockley Provident Dispensary. Erected in 1881 to the designs of Messrs. Bateman and Corser, on a site once occupied by the Wagon and Horses, the dispensary was a facility offering medical assistance to the working classes who paid a small weekly subscription as a form of medical insurance.

If you have a genealogy story or query regarding Farm Street you can contact me and I will post it here in addition to including your message within the website pages for Birmingham Genealogy.

If you would like to share any further information on Farm Street - perhaps you drank in one of the pubs in the past? Or maybe knew a previous publican running one of the boozers? Whatever the reason it would be great to hear of your stories or gossip. Simply send a message and I will post it here.

"Lance-Corporal Arthur Vickers of the Royal Warwickshire Regiment, who was believed to be one of the last Birmingham V.C.'s, has died in a sanatorium. He won the award while serving on the Western Front with the 2nd Battalion of the County Regiment, when he stood up under heavy fire to cut enemy barbed wire. Lance-Corporal Vickers, whose home was in Farm Street, Hockley, had been employed by Messers Lucas's Ltd. since 1935 as a millwright's mate. The Birmingham Citizen's Society is arranging the funeral. The exploits which won L-Cpl Vickers the V.C. was described in the following terms by the then Lord Mayor of Birmingham [Alderman Neville Chamberlain], when the City Council honoured him by the presentation of a framed illuminated address in 1916. The Lord Mayor was describing the scene on September 25th during operations before Hulloch : "Few acts can have been finer than the one performed by Lance Corporal Vickers. In the face of almost certain death, he voluntarily went out in broad daylight, in the face of murderous shell and rifle fire, and cut the barbed wire which was holding up his battalion. The official record states that his deed contributed materially to the success of the operations upon that day." At the time he won the award, Lance-Corporal Vickers was a single man, aged 33 years, and resided with his sister, Mrs Amy Atkins, of Park Road, Aston. He was born in Gosta Green. He had to visit six recruiting offices in Birmingham in August 1914, beofre he was accepted for the army owing to short stature."
"Death of Birmingham V.C. Holder"
Birmingham Daily Post : July 29th 1944 Page 1