The Spring Gardens, later the New Spring Gardens and Spring Gardens Tavern, was more than a public-house. Although it was fully licensed to sell beers, wines and spirits, it was an early tourist attraction of Birmingham. It was a pleasure garden, horticultural retail outlet, tea gardens and a destination catering for those on boating excursions that departed from Apollo House in Moseley Street. Looking at Floodgate Street and across to Moseley Street today that may be hard to believe but in the late 18th century there was still some green space in the locality. The Rea was probably not as squalid and filthy as it would become when industrialisation took hold on a massive scale. 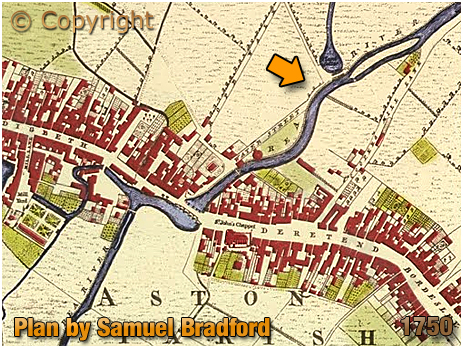 This extract from a plan of Birmingham by Samuel Bradford dates from 1750 and shows Floodgate Street next to the river, except in this period the thoroughfare was known as Water Street. This shows that beyond the main route into Birmingham there were still open fields where the air was relatively clean and fresh. I have marked the junction of Little Ann Street as this was possibly the first site occupied by the Spring Gardens. This corner position would later be occupied by a beer house called the Swan Inn, a licensed house that survived into the 21st century.

Samuel Fallows was listed at the Spring Gardens in a trade directory published in 1786. However, the below advertisement from Aris's Birmingham Gazette published in October 1791 is interesting in that it seems to be promoting a "new commodious house and gardens." 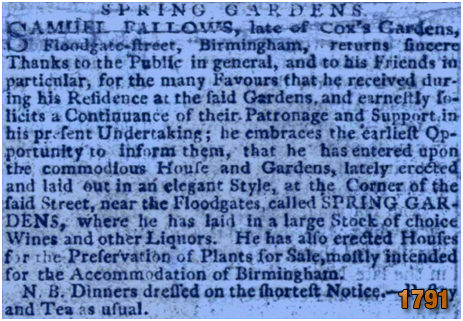 This advertisement suggests that Samuel Fallows had moved his business from Cox's Gardens to a new property "erected on the corner." So, where was Cox's Gardens? Well, I would suggest that the business was operated on land owned by John Cox, a saw and screw maker who was listed as a publican at Floodgate Street within Birmingham's second trade directory of 1770. He was further listed in Swinney's trade directory published four years later. In the first directory for the town [Sketchley's 1767] John Cox was publican of the Three Doves in Mill Street.

Looking at the plan by Samuel Bradford this suggests that Cox's Gardens were on the south-eastern side of the thoroughfare where there was a green space between the street and the river. By the time of early 19th century maps, the Spring Gardens was marked on the corner of Floodgate Street and Little Ann Street. 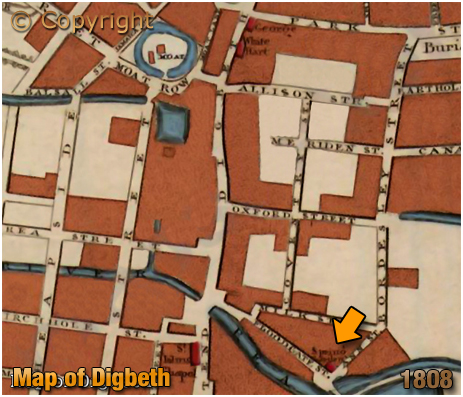 An entry in Walter Showell's Dictionary of Birmingham states that the Spring Gardens closed on July 31st, 1801. However, the house is still listed in the licence register after this date. In 1802 the licensee was John Aston and in 1804 John Warwick took over as licensee.

The name of William Lowe in the licence register for the Spring Gardens is most interesting. I suspect that this the man who operated a shop and held the freehold of a number of properties in the locality.

The above rate book entry shows that a person named Lowe owned the Swan Inn and it was let to John Smallwood. This is a possible tangible link between the two businesses. I say two because the licence of the Spring Gardens was removed to another property on the eastern side of Floodgate Street. This was possibly the former house of John Cox as the name of Cox's Gardens resurfaced in later years.

There are two possibilites for the story of the Swan Inn. Without seeing the deeds I cannot confirm if the building is the former Spring Gardens that was unlicensed for a period or if the property was rebuilt in the early 19th century. The Swan Inn did not commence trading until the 1830s and the beer house operated at the same time as the Spring Gardens for many decades. 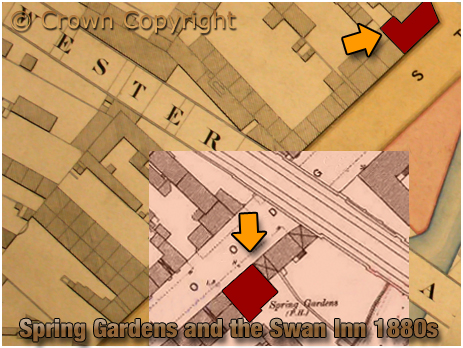 To help make things clearer I have combined two plans [above] to show the locations of the Swan Inn and Spring Gardens. As the latter was not on land owned by the Gooch Estate it was not mapped on the 1875 plan. So I have overlaid a section from an O.S. Map dating from 1889 which shows the Spring Gardens on the opposite side of the street and on the other side of the railway. The old licence of the Spring Gardens was seemingly removed from the corner position to these premises. I suspect that the building on the corner of Little Ann Street dates from 1791 but I am not certain of this as I do not have documentary evidence. If this is the case the building was unlicensed until a beer house licence was granted in the 1830s. This could only happen after legislative changes of 1830. The earliest record I have seen of the Swan Inn is the rate book of 1835 that recorded Mary Cooper as the occupier.

This advertisement/notice suggests that the movement of the Spring Gardens occurred in the early 1820s. Thomas Tabberner staged a house-warming in what was the 'New' Spring Gardens. The resurrection of the Cox's Garden term raises the possibility that the premises was formerly the house of John Cox. However, this is conjecture on my part.

The New Spring Gardens went from being a place where people came for luncheons and afternoon teas to being no different from many of the surrounding boozers where trouble was always a spilled pint of ale away. The high number of licensees tells the tale of the tape - this was a place in which it was hard to turn a profit. Many licensees had a second trade, such as Nehemiah Farmer who in the 1840s worked as a whitesmith. He worked here until his death in 1854.

Herefordshire-born James Dawes also had a second income stream. He worked as a pump maker until his death in 1858, the licence of the New Spring Gardens passing to his Bridgnorth-born wife Ann. 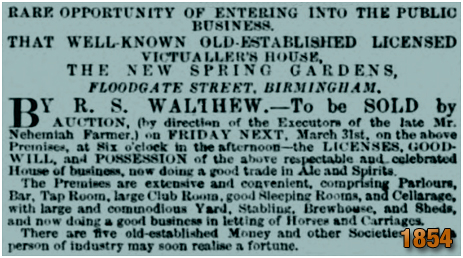 James and Ann Dawes were the couple to respond to this advertisement of 1854 which provides some details of the property and outbuildings.

The licence of the Spring Gardens was transferred from David Williams to Richard Hewitt in March 1867. However, he remained only for a short spell and the licence was tranferred to Robert Priest in August 1869.

The licence of the Spring Gardens was transferred from Edward Burton to John Bradley in March 1870 after he and his wife Emma were tempted by the above advertisement which shows that it was a homebrew house. The licensees here tended to hire travelling brewers or called upon the expertise of a number of brewers based in Birmingham. These brewers would work at a handful of public-houses, brewing on different days of the week in several houses.

John and Emma Bradley both hailed from Derbyshire. Following her husband's death, Emma Bradley re-married to John Hanson in October 1876 at All Saints' Church in Hockley. He had been working as a whitesmith in Meriden Street. The licence of the Spring Gardens was subsequently transferred to him during December 1876. He would remain as licensee for the rest of the 19th century. In the early 1890s, as a widower, he was running the pub with his granddaughter Emma Bradley.

Like previous landlords, John Hanson hired brewers to produce the ales sold in the tavern. In September 1892 he made a rather startling discovery when he went down the steps of the cellar to find the brewer Enos Foster with his head in a tub of beer. The 48 year-old brewer had drowned but his death was not discovered for several hours. John Hanson immediately fetched the police and, together with Constable William Bennett, lifted the poor man from the tub. Dr. Haddow confirmed that he had drowned in the beer and his body was removed to the Moor Street mortuary. At the subsequent inquest it could not be ascertained if the brewer, a resident of Lower Essex Street, had committed suicide. Consequently, the jury returned a verdict of "Accidental Death."

John Hanson married again his later years. In the early Edwardian period, as a man in his seventies, he was running the Spring Gardens with his wife Clara, herself in her 60s. After a long and hard career, John Hanson died in July 1903. Clara ended up living in the old workhouse at Western Road.

Objections to the renewal of the licence were raised by the magistrates in 1905 but William Bull remained as licensee for a period. However, it would not be long after that the life of the Spring Gardens came to an end. Dare's Brewery Ltd. were operating the house in the Edwardian period, though ownership of the property was held by Mary Jane Bingley. The last recorded licensee appears to be John Walter Phillips. The former brass polisher took over from Benjamin Cooper who, along with his wife Elizabeth. left the premises on May 9th 1911.

Licensees of the Spring Gardens

"James Williams [27], fireiron polisher, Floodgate Street, was charged with stabbing his wife, Mary Ann. The prosecutor, who it appears had been living away from her husband for some time, stated that on Monday her husband, sister, brothers, and herself went to a party at the Spring Gardens, in Floodgate Street. On going home at night the prisoner, without any provocation, struck her in the shoulder with a pocket-knife. She was afterwards conveyed to the Queen's Hospital, where the wound was dressed. A sister of the prosecutrix gave corroborative evidence, excepting that she did not see any knife when the blow was struck. Mr. Whitehouse, surgeon, of the Queen's Hospital, stated that the prosecutrix had received a cut about half an inch deep on the collar-bone. It would very likely be caused by a penknife. There was, however, no danger to be apprehended. In answer to the charge, the prisoner, who was arrested by Police-Constable Thomas Connolly, stated that he would reserve what he had to say, and he was committed for trial at the Sessions."
"Stabbing a Wife"
Birmingham Daily Post : December 29th 1880 Page 6

"Henry Smith, a brass polisher, pleaded not guilty on indictment of inflicting grievous bodily harm upon William Bull, proprietor of the Spring Gardens public-house, Floodgate Street, the 17th February. Mr. Joy appeared for the prosecution. William Bull said that he was conducting his house on the night of the 17th when a dispute arose in the bar. He ordered two - one of them a woman - to quit the bar. At this prisoner intervened, and used some bad language. Witness then asked him also to leave the premises. Prisoner refused do so, whereupon Bull drew out a police whistle and went out into the street and blew it. On returning he encountered the prisoner, who leaped behind him and dealt him a blow on the back of the head, rendering him unconscious. The medical man who attended him was then called, and stated that there was a large, deep cut to the bone on the back of the prosecutor's head and a second cut on his cheek. One of his eyelids had been severed, and the eye so badly injured that he would never again have his proper sight. The jury returned a verdict of guilty. There were other cases of the committal of assault against the man. The Deputy Recorder said that there was not single point in the whole case in mitigation of the man's offence. He would sentence him to a term of imprisonment for three years."
"Wounding a Publican"
Birmingham Mail : April 23rd 1906 Page 3 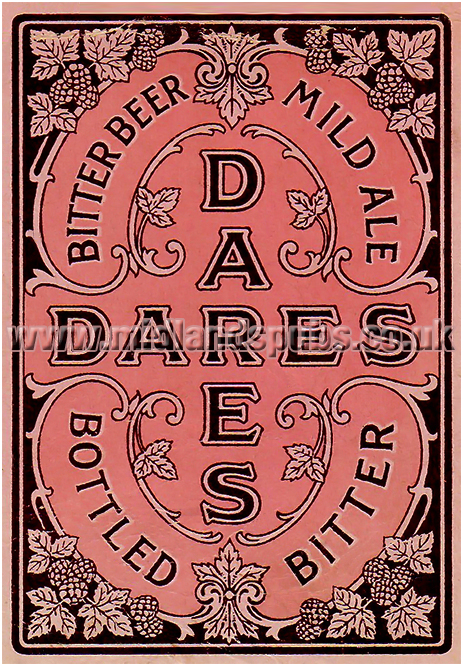