History and Information on Garrison Lane at Bordesley in Birmingham in the County of Warwickshire.

Some history of Garrison Lane 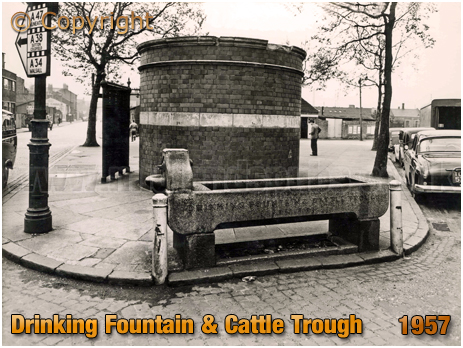 Dating from 1957, this photograph is labelled Garrison Lane which is on the right as it snakes around Callowfields Recreation Ground. If the photographer turned to the left you would see the Sailors' Return public-house. The photograph centres on a drinking fountain and cattle trough, along with a circular lavatory with cast-iron screen next to its entrance. Although the photographer is stood close to the junction of Lower Dartmouth Street, the thoroughfare to the left is Lawley Street.

If you have a genealogy story or query regarding Garrison Lane you can contact me and I will post it here in addition to including your message within the website pages for Birmingham Genealogy.

If you would like to share any further information on Garrison Lane - perhaps you drank in one of the pubs in the past? Or maybe knew a previous publican running one of the boozers? Whatever the reason it would be great to hear of your stories or gossip. Simply send a message and I'll post it here.

"On Saturday afternoon, the Borough Coroner [Mr Hawkes] held an enquiry at his Court, Moor Street, into the circumstances attending the death of Emma Clarke [22], the late wife of Thomas Clarke, Hawker, 2 Court, Garrison Lane. Mrs. Ann Hart, the mother of the deceased, said she lived at the house, 2 Court, Garrison Lane. On the evening of Sunday, the 18th of November, whilst in the court, she heard her daughter cry "Murder!" At that moment Thomas Clarke ran out of the house and into the street, with his coat and hat on. Witness entered the house, and found her daughter with her face in the coalhole, bleeding from the head. Witnesses at once raised an alarm, and several neighbours came in. She could not understand what had caused the husband to make the attack upon his wife. He was in excellent spirits, and appeared perfectly sober. Police Constable J. C. Bertie [68E] said that on the evening in question, while on duty in Alcester Street the deceased's; husband ran up to him, and in great excitement said, "I have killed my wife." He fell in a fainting fit and was removed to a house adjoining. Upon recovering, he repeated his statement that he had killed his wife, adding that he had done so with a chopper. Witness took him into custody, the prisoner being perfectly sober at the time. Upon going to Clarke's house witness found the deceased lying on the floor of a room, and bleeding from wounds in the head. Near her lay a hatchet, the blade of which was covered with blood and hair. She was at once removed to the General Hospital. Mrs. Ann Bayliss, 7 house, 2 Court, Garrison Lane, stated that she lived next door to the prisoner. On the Sunday evening in question she heard a woman in the house screaming, and at once hurried in to ascertain the cause. The deceased was lying, as described by Mrs. Hart. Thomas Clarke ran out into the street. He appeared sober, but was excited. Witness knew of no motive for the murder. Mrs. Mary Ann Bayley, 6 house, 10 Court, Garrison Lane, one of the women who was attracted by the screams of the deceased, deposed to the position in which she found the body lying. She saw the hatchet referred to by the officer. It had blood and hair upon it. Lucy Low, single woman, 3, Garrison Lane, said she accompanied the deceased in a cab to the hospital. She was sensible and able to talk. Witness asked her why Clarke had attacked her, and she made a reply. Coroner: "You must not say what that reply was." A Juryman, said he did not know what the law upon that point might be, but it would be more satisfactory to the jury if this witness was allowed to state what the deceased said to her in reply to the question respecting her husband's motive. The Coroner said he could not allow the witness to be questioned on that point. He had until recently allowed such questions on the authority of a learned Judge as he had laid the law down some years ago. A short time since, however, a police officer, charged with the manslaughter of his wife, was committed by the coroner's jury to the Assizes, and when the case came before Mr. Justice Stephen he was very angry when he saw that such a question had been asked, and the answer introduced in the deposition. The learned judge said it was not evidence, and for the matter of that, he [Mr. Hawkes] knew such was the case, perhaps, before Mr. Justice Stephen was born. But its law being thus laid down, he could not allow the answer to such questions to be put upon the depositions. The rule was that if in answer was given it could only be brought as evidence for manslaughter or murder when it was given in the presence of the accused or at a moment when the injured person thought that he or she was going to die. In the present case the woman probably did not think she was so near death. She was sensible up to the day on which she died. He was obliged to follow the lights as they blazed out - where they blazed out in different colours he was obliged to follow them in turn. Mr. C. J. Evans, assistant surgeon at the General Hospital, said that when the deceased was received into that institution she had three wounds, one on top of the head, one behind the left ear, and one on the back of the head, each wound constituting a compound fracture of the skull. Dr. Barling, house surgeon, deposed that the deceased died on Wednesday last, having remained conscious up to a few hours before her death. He did not think she would have been aware of her dangerous condition until the last twenty-four hours of her life. Deceased was pregnant. Death was caused by an abscess on the brain, brought about by the injuries to her head. The Coroner briefly summed up, and pointing out that any question with regard to the state of mind of the prisoner was not for the consideration of the coroner, or even the grand jury, The jury, without retiring, returned a verdict of wilful murder against Clarke, and he was committed to the Assizes by the Coroner."
"The Wife Murder in Garrison Lane"
Birmingham Daily Post : December 24th 1883 Page 6