History of the Pelican Inn on Great King Street in Hockley in Birmingham in the county of Warwickshire.

Some history of the Pelican Inn

Formerly known as the Pilgrim Tavern, the Pelican Inn was located on the corner of Unett Street. The pub, along with the neighbouring properties, was once owned by a Charity trust operated by The Birmingham General Dispensary who sold off the land and properties in 1922. An old lease agreement showed that the land was first laid out for development around 1832. The corner plot also featured a row of back-to-backs known as Pilgrim Terrace. 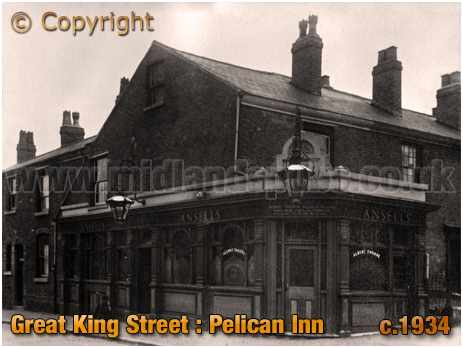 Dating from around 1934, this photograph shows the Pelican Inn on the corner of Unett Street. At this time Albert J. Thorne was the licensee of the beer house at No.37 Great King Street. He kept the tavern with his wife Mary Jane. The pub was operated by Ansell's Brewery Ltd. The Aston-based company had held a lease on the property for some years prior to this image being taken.

Looking at the photograph above, it is easy to see the brewery's ground-floor projection of the late Victorian or Edwardian periods. The original property probably looked similar to the neighbouring houses and would have traded from the front room only with the publican brewing up out back. The Pilgrim Tavern was one of the early buildings in Great King Street and had been converted into a beer house by John Wright in the mid-1840s. He was recorded as a brewer in the cenus of 1851.

The Pilgrim is a curious name for a Birmingham boozer? It got me wondering if there was a story in there somewhere? One possible answer is within a newspaper article I stumbled across. It is dated September 1845 so not long after the premises opened as a beer house. The article reported on the 'Presentation of a Testimonial' by the Collingwood Lodge of the Oddfellows to P.G. Henry Wright, no doubt related to the publican. The article reported that: "a highly respectable party, consisting of the officers and brothers of the Collingwood Lodge, and other friends," met at the house of John Wright, "for the purpose of presenting a valuable silver lever watch to P.G. Henry Wright, on his being about to take his departure for America." Speaking from the chair, William Bogle "wished him favouring breezes to waft him over the Atlantic, and health, happiness, and prosperity when he arrived there." Henry Wright, in returning thanks, assured his brothers and his friends that "the very unlooked-for honour they had conferred him would never be forgotten, and to the last hour of his life he should feel the deepest sense of gratitude for such a manifestation of their regard." In conclusion, he expressed "a fervent wish that if he never met any of the kind friends then surrounding him in this life, they would all meet in a better and happier world." I cannot help but feel that this journey to a new life was somehow compared with that of the early settlers of Plymouth, Massachusetts and provided John Wright with the name of his recently-opened beer house.

Married to a Yorkshire woman, John Wright kept the Pilgrim Tavern for over twenty years. Inn July 1868 he was declared bankrupt by which time he was residing in lodgings at Henry Holmes's, next house to Stone Yard, Wilton Street in Aston Manor. 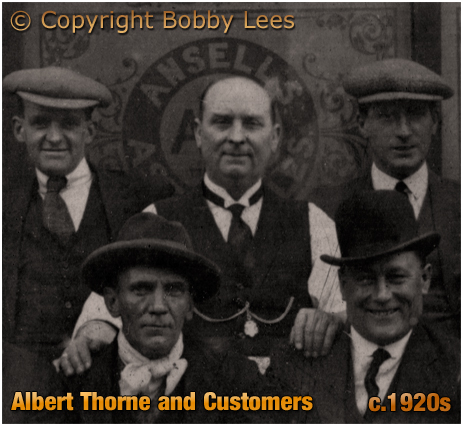 Courtesy of Bobby Lees, this photograph shows Albert Thorne with some of his customers outside the Pelican Inn, probably from the 1920s. I think he may have served with the fledgling Royal Air Force in the First World War, following which he and his wife Mary Jane kept an off-licence on Park Road in Hockley. The couple moved to the Pelican Inn in the early 1920s and remained for over two decades. 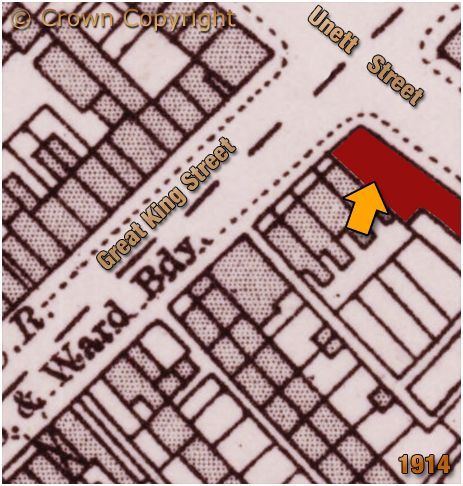 This map extract from 1914 shows the location of the Pelican Inn on the south-eastern corner of the crossroads formed by Great King Street and Unett Street. Note the Borough and Parliamentary Boundary running along the middle of Great King Street. Located to the south-west of the beer house, Pilgrim Terrace can be seen as a row of back-to-back cottages.

If you have a genealogy story or query regarding the Pelican Inn you can contact me and I will post it here in addition to including your message within the website pages for Birmingham Genealogy. 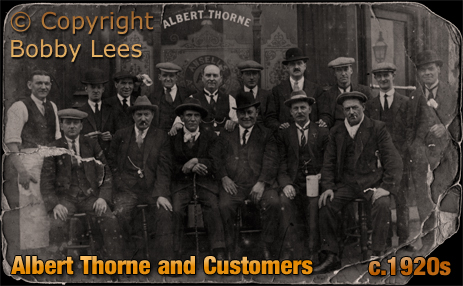 "I have attached a photo of my grandfather [seated on the far left next to the barman] outside the Pelican Inn. I remember the pub as a young boy and whilst memory can deceive [I am well into my seventies], I believe it could have been in Unett Street, near Hockley Brook - I was born and spent my youth in Lozells. A little background info: my real grandfather died young and was never really spoken of [villain] and my step-grandfather was named Charlie Massey, I remember that he had his 'office' in that pub - he was a bookmaker and a brute of a man. I believe the big bloke in the picture was Joe Kimber - who was later my uncle's business partner. My uncle's name was Eddie Cutler - he owned the White Swan in Newhall street [where I worked as a kid] and The Packhorse at Hollywood. They are all deceased now. Since I was terrified of staying in Brum and ending up either working at Lucas's or in the pub with the family [all pugilists] I left Brum and England at seventeen and landed in Australia when I was twenty two - where I have stayed. It is therefore very difficult for me to do any 'in-situ' research. Old blokes get curious about these sort of things and any help you could give me would be very much appreciated."
Bobby Lees, Australia

"I am engaged in the typical pastime of an old codger 'where did I come from?' Well, I know where I came from but my family is a bit of a mystery. Previous family names were [nee] Roberts, Moss and Aston [grandmothers]. And they all lived in the ward of Aston. I know that there were a couple of villains [including my grandfather] amongst them and generally speaking Birmingham was always too cold and too tough for me and I guess that was why I starting walking [literally] aged 17 and ended up in Australia via India and South East Asia, where it was just as bad except they were they were all shooting at each other during the 1960s... I will attach a photograph of the pub that they [the family] were going to give me, trying to lure me back into the fold but having seen paradise there was no way I was going back. Uncle Eddie [Cutler] ran the pubs, restaurants. cafés, betting shops and the pub they were going to give me was The Packhorse on the Alcester Roa, in Hollywood. The quest continues and I thank you for this contact and keeping me in the loop."
Bobby Lees, Australia

"At the Birmingham Police Court today, before Messrs. Kynnersley and Bunce, William Smith [50], plumber. Brass House Passage, was charged with stealing l½cwt. of lead piping, the property of the Corporation Water Works, on the 30th of July, and William Woodfull [47], and Harry Woodfull [18], plumbers, of Bridge Street West, were charged with receiving the same knowing it to have been stolen. Two men named Wall and Johnson were also charged with receiving lead, but their cases were put back for a week as Johnson was ill in prison. The two lads named Jukes and Johnson, who were brought up last week, were discharged. Mr. Smith [Town Clerk] prosecuted on behalf of the Corporation, and Mr. T. C. Cheston defended tho prisoners. Woodfull. - Mr. Smith, in opening the case, stated that Smith was engaged by the Corporation, and that the other prisoners had received the stolen property from Smith. Great credit was due to the detectives for the diligent manner in which they had acted. Detective Inspector Black stated that he and Detective Sergeant Baker on the 30th of July last, were waiting for the prisoner Smith to leave the Waterworks Department, in Broad Street. Smith and Jukes came out with a handcart and went down New Edmund Street, accompanied by Woodfull. When they got to the Pilgrim public-house, in Great King Street, they began to work, and left them. Woodfull and his son afterwards returned with a handcart, and Smith gave the elder Woodfull a coil of lead. Woodfull went away again, and the son took the cart down Key Hill. Witness sent two lads to follow the cart. About 11 o'clock at night on the 15th of October witness went to Woodfull's house and told him what he had seen on the 30th of July. He replied that it was his own lead, and his son took it to Lime Grove Road, Lozells. On the 17th of October, witness, Sergeant Baker, and Inspector Clarke, of the Waterworks Department, went to nine unfinished houses in Rosalie Street, Brookfields. They dug up a quantity of lead, weighing 1cwt. 2qrs. 31bs. Witness left the street in a cab, when he saw Woodfull, who disappeared. Witness afterwards arrested him and charged him with stealing the lead, and asked him to and see it. Prisoner replied that it was not the lead he was seen with in Great King Street. That lead was in Albert Road, Aston. Witness next morning visited prisoner in the gaol and asked him to tell him where his business books were when he replied that he had no books, and afterwards told him he would not tell. Detective Sergeant Baker gave corroborative evidence. Charles Baker, son of the last witness, said he followed the handcart to some new buildings in Rosalie Street, when tho younger Woodfull took the lead from the cart and placed it on the footpath. Thomas Clarke, plumbers' inspector of the waterworks, and another witness identified the lead as belonging to the Corporation. After some further evidence the prisoners were committed to the Sessions, the younger Woodfull being admitted to bail. Smith and the elder Woodfull were also charged with stealing and receiving a quantity of lead on the 26th of July. The evidence not being sufficiently strong enough in this case the prisoners were discharged."
"Wholesale Robbery of Lead"
Birmingham Mail : October 24th 1881 Page 3