Some history of the St. Matthias' Tavern on Great Russell Street at Hockley in Birmingham in Warwickshire

The St. Matthias' Tavern opened in the mid-19th century as a retail beer house and brewery and was located on the western side of Great Russell Street, on the south corner of Bridge Street West. 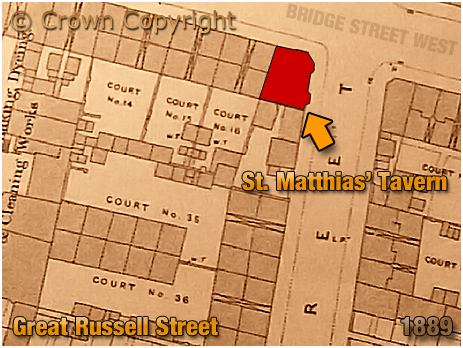 The tavern was named after the local parish church dedicated to Saint Matthias who, according to the bible, was the man chosen by the apostles to replace Judas Iscariot following the latter's betrayal of Jesus. Saint Matthias is, among other things, the Patron Saint of Alcoholism so perhaps it was an apposite inn sign for some of the patrons of this house.

The Church of St. Matthias stood on the corner of Wheeler Street and Farm Street. The foundation stone was laid by Charles Bowyer Adderley on May 30th, 1855. This throws up an immediate question - what was the name of the beer house prior to the construction of the church? The tavern had been trading since the 1840s and pre-dated the church. It was by accident that I happened upon the above advertisement for the Robin Hood Retail Brewery and, after doing a little digging, I found that it actually referred to this building on the corner of Bridge Street West. Although the inn sign is not mentioned or recorded in trade directories, the census enumerator of 1851 recorded the name of the Robin Hood on the return sheet.

I had already found this record of the Russell Brewery Tavern and it would appear to mark the date when the name was changed. Unfortunately, there is no name of the licensee or indeed a precise location within the advert. However, this is most probably this tavern. Certainly, the brewery at this location is mentioned in subsequent articles. One element that does raise a little doubt is that this section of the thoroughfare was formerly known as Lower Russell Street but this advertisement states Great Russell Street. I am not certain of the date that the street name changed.

Retail brewer Samuel Forrest was the licensee in charge of the Retail Brewery and Beer House in the mid-late 1840s. He kept the tavern with his wife Mary Ann. The Forrest family hailed from Cradley and were bayonet makers. His son William had continued in this field of work in Birmingham. In their retirement years Samuel Cradley returned to the place of his birth where he rented out property.

Former lamp-maker Frederick Phillips was the licensee in the early 1860s. The retail brewer kept the beer house with his wife Rhoda. The couple had four children and employed Emma Walker as a domestic servant. She hailed from Berkeley in Gloucestershire. The couple's son, also named Frederick, joined his father in the business and learned the craft of brewing.

Frederick Phillips was a regular attendee at the magistrates' court, renewing the music licence for the tavern. He was clearly more successful than Edwin Chilton of the Queen's Head in Farm Street. The latter publican, despite never being fined by the magistrates, faced opposition from the vicar and congregation who presented a memorial, praying the Bench not grant the application. The memorialists, as they were called, were "actively engaged promoting the cause of education, and, having a school in the parish, they looked with the utmost alarm upon the prospect of a licence being granted to a house like the Queen's Head, the effect of which would be to foster vice and be totally inimical to the progress of education. The memorialists, as inhabitants of the neighbourhood, already suffered great annoyance from the manner in which the house was conducted and apprehended that if the licence now asked for were granted the quiet of their homes would be still further invaded." The St. Matthias' Tavern was further away from the church and did not suffer the puritanical nimbyism of the vicar. As a result, Frederick Phillips was granted his licence for music.

Frederick and Rhoda lost one of their sons, Herbert, whilst running the tavern. Frederick senior left the trade and became an overseer and collector of the poor rate for Aston. 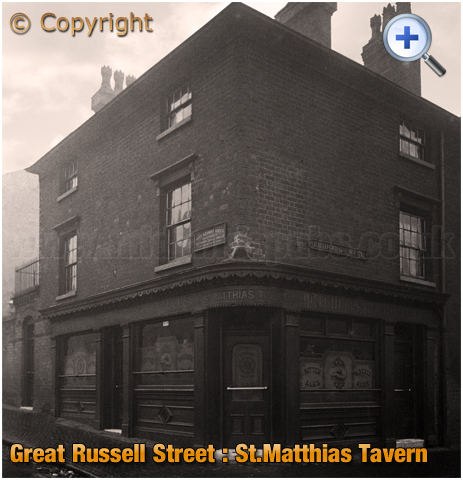 This photograph was taken towards the end of the 1920s when Harry and Lily Ashfield kept the pub. He had previously worked as an engraver in the jewellery trade. They held the tiller until July 1931 and would later move to the White Swan on Floodgate Street. By the outbreak of the Second World War he and his wife Lily lived in 2 Court, close to the Black Horse on Park Lane at Aston. The couple remained in this location until his death in January 1961.

Note in the above photograph that the pub's extension along Great Russell Street had not been built.

The old outbuildings of the tavern can be seen on the map dating from 1889. These would be removed for the building of an extension that included a new smoke room and toilet facilities. These can be seen in the photograph that was taken in 1961 when Harry Thompson was the licensee. Note that one of the old entrances to the pub has been bricked up. 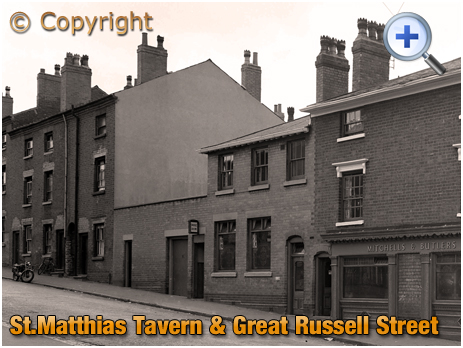 I am not sure if this was a Mitchell's house or one operated by Butler's Crown Brewery but the property is most unusual in that it was acquired for the sum of £2,000 in June 1888 from the London brewers Mann, Crossman & Paulin Ltd. The value of the property appreciated when the licences of some properties were surrendered during the inter-war years. These were the neighbouring Frankfort Arms, along with an off-licence at No.65. Additionally, the capital account was boosted with the closures of the Bank Tavern in New John Street West and another outdoor at No.110 in the latter thoroughfare. 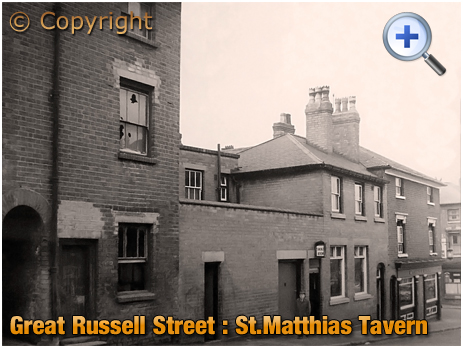 Taken a few years later in November 1965, this photograph of the pub was captured from a position in front of No.204 Great Russell Street. The entry to the left of the photograph led to Court 35. The adjoining Court 36 was the centre of attention in February 1891 when a Murder took place. 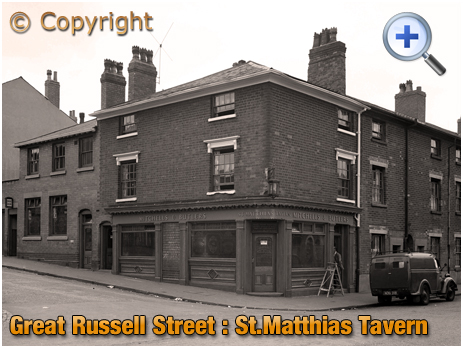 At the time of the photograph in 1961 the pub was receiving a fresh lick of paint. That may be a vehicle from the estates department of the Cape Hill brewery.

A high turnover of licensee in the 1880s suggests that it was tough going for publicans to turn a profit. The homebrewed ales had gone and the locals seemingly did not like the London beers sold by Mann, Crossman & Paulin Ltd. Tenant Frederick Clark was declared bankrupt in April 1885. The licence had already been transferred to spoon maker Zadock Congrave in March of that year. The licence of the St. Matthias' Tavern was transferreed to William Crook in October 1888 but he was gone by May 1889 when William McCarty had a go at running the place. 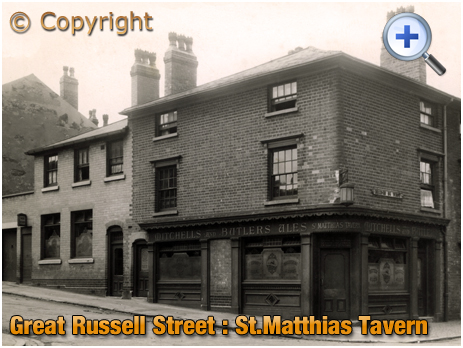 This photograph was taken during 1943 when the licensee was John Stokes. He had taken over as manager in November 1942. This image shows that the extension to the pub had taken place. Thanks to Andy Maxam who supplied me with a property record, I now know that the plans for this work were passed in the summer of 1930. 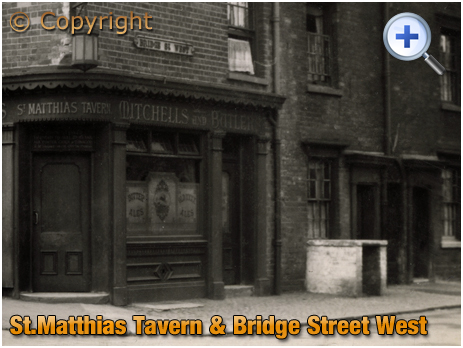 Signs of global conflict can be seen in this photograph. I would have thought that Mitchell's and Butler's would have taped up the lovely etched-glass windows of the tavern. At the outbreak of war the tavern was kept by Stewart and Ethel Sharpe, a couple who had managed the pub throughout the 1930s. They had married at St. James the Less at Ashted in 1919. Stewart Sharpe was the son of a soldier. Ethel was formely named Yates.

Licensees of the St. Matthias' Tavern