The Woodman Inn stood on the eastern side of Great Russell Street in the southern section of the street, not too far from the Church of Saint George in the Fields and Tower Street. 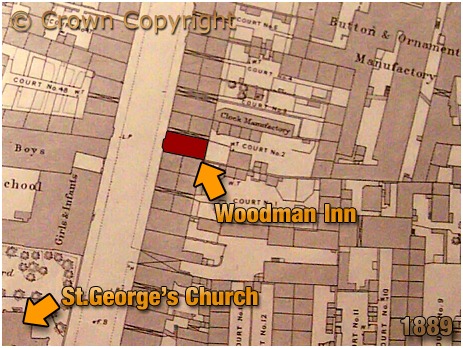 This map extract shows how the Woodman Inn was part of a long row of housing from its construction in the mid-19th century. However, when the new schools were built, the building suddenly became the end of the row because every house to the south of the building, including Court No.1, was removed to make way for the new educational facility. This was long after the pub ceased to trade. When the building served as a tavern its location was as seen on this map extract. The old school buildings, which dated from 1834-5, can be seen here almost opposite the Woodman Inn beer house.

During the Edwardian period the Woodman Inn was operated by Mitchell's and Butler's.

Licensees of the Woodman Inn

" Mr. Hawkes [coroner] yesterday enquired into the circumstances attending the death of Ada Wiseman [10], who had attended St. George's Schools, Great Russell Street. About a month ago the child was boxed on the ear and struck on the back of the neck with a pointer by a monitress named Key. On Friday last she complained of pains in the head, and died on Monday. The medical evidence showed that death was due to infiammation of the membranes of the brain, but there was nothing to show how it was set up. The jury returned a verdict of "Death from natural causes," and condemned the practice of boxing children on the ears. The Coroner described the practice as monstrous and atrocious."
"News Of The Day"
Birmingham Daily Post : April 26th 1889 Page 4