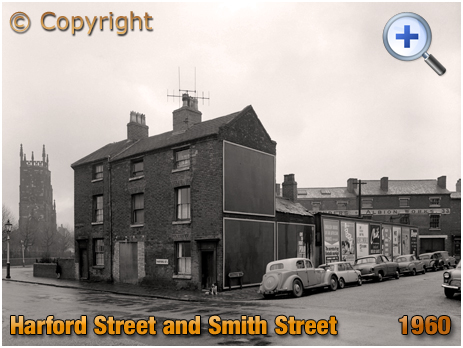 "At the Public Office, yesterday, before Mr. T. C. S. Kynnersley [Stipendiary] and Mr. J. Poncia. the following persons* were charged with offences stated below, and committed on the day of the election. James Smith [23], wire drawer, 37 Court, Great Hampton Street, and Thomas Smith [30], labourer, Court, Livery Street, were charged with breaking some glass in the window of Mrs. Ann Evans's house, Harford Street, and also with creating a disturbance and breaking some glasses inside the house. About nine o'clock on Tuesday night last, the prisoners, in company with a number of other men, went to the prosecutrix's house, and demanded something to drink. On its being refused them, they became very violent, throwing the glasses about the shop, and breaking the window. Mr. Kynnersley said it was the conduct of such fellows as the prisoners that brought disgrace upon the whole town, and sentenced them each to two months' imprisonment. One of the prisoners, on leaving tbe dock, addressed some person in the court as "old pal," and told him to "cheer up, as he could that on his head."
"A Row in Harford Street"
Birmingham Daily Gazette : November 19th 1868 Page 5