History of the Rutland Arms in Heath Street at Winson Green in Birmingham in the county of Warwickshire.

Some history of the Rutland Arms

The Rutland Arms was located at No.281 Heath Street at Winson Green. The building was midway along on the north-east side of the road, the rear of the property backing onto a canal feeder next to the Birmingham Canal. The original number of the property was 77. 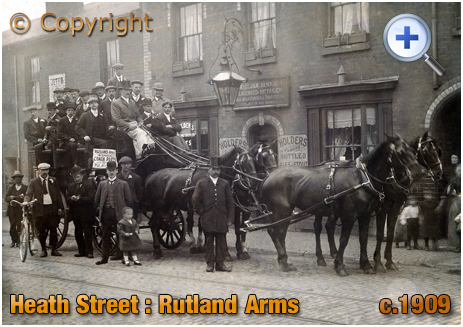 In this lovely photograph some of the regular customers are about to embark on their 4th annual outing from the Rutland Arms. The date is June 28th but the man with the bowler hat is obscuring the year and also the destination which begins with 'Ho.' However, this can be narrowed down a little because the name of William Hinks is above the front door of the premises. He was recorded as the occupier of the beer house in a rate book for Rotton Park in 1906. In this book John Hinks is listed as the owner of the property. As can be seen from the walls and window the Rutland Arms was an outlet for Holder's Ales and Stout. William Hinks is listed in a trade directory published in 1906 so was probably here in 1905. He is listed until 1911 when he was recorded at 148 Larches Street at Sparkbrook, the address of The Beehive, another beer house operated by Holder's Brewery Ltd. So, if I had to hazard a guess I would say that the photograph was taken in June 1909 as the trips were possibly organised by William Hinks.

For those wondering how the beer house got its name look no further than licensee Charles Christian who hailed from Exton in County Rutland. His second wife Sarah was also from the county, her birthplace being Barrow. The son of an agricultural labourer, Charles Christian went into service and by 1860 was one of an army of staff working at the old Moxhull Hall, the grounds of which form much of the Belfy Golf Club. Charles Christian worked for Berkeley Octavious Noel, a grandson of the 4th Earl of Gainsborough, who had married the widow of Andrew Hackett.

Charles Christian may have been rewarded for his years of service to the Lord of the Manor and came to Birmingham and opened the Rutland Arms as a retail brewer in August 1865. At the magistrates hearing it was said that there was no other licensed house in the thoroughfare so it would appear that the Rutland Arms was the senior house of Heath Street. As a retail brewer, it is reasonable to assume that the house sold homebrewed ales.

In the mid-19th century the Rutland Arms was next door to an early branch of the Birmingham Heath Co-operative Society.

Charles Christian died in July 1885. Two years later his widow sold the Rutland Arms, the above advertisement for the sale providing a glimpse of the business and associated properties.

John and Annie Smith were running the Rutland Arms at the beginning of the Edwardian period. This was at a time when Sarah Marshall operated a butcher's shop next door.

Licensees of the Rutland Arms 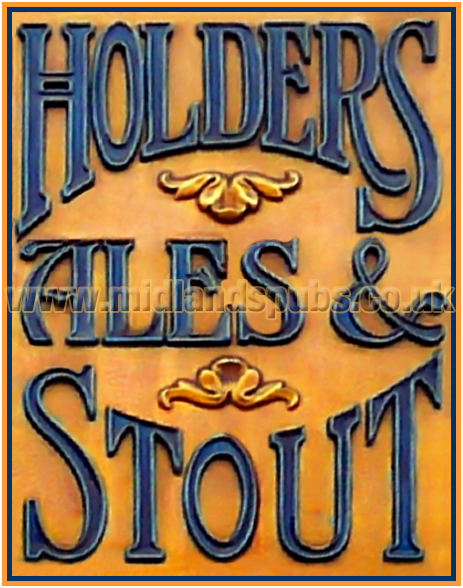 If you have a genealogy story or query regarding the Rutland Arms you can contact me and I will post it here in addition to including your message within the website pages for Birmingham Genealogy.

"Frederick Shellis and Victor Gannon were charged with being deserters from the 1st Royal Warwickshire Regiment, and James Gannon, of 281, Heath Street, Winson Green, brass polisher, father of Victor Gannon, was charged with harbouring them at his house, well knowing them to be deserters. According to the evidence Detectives White and Algar, from private information, went to the house at five o'clock that morning, called James Gannon up, and asked him if had two deserters in the house. He said "Yes," and when charged said he knew what it was coming to, and that he had wanted the young men to go back all the time. Shellis and Victor Gannon both admitted that they were deserters, the former having absconded from the army in February and Gannon in May last year. They were ordered to await escort. James Gannon told the Bench he did not know the youths were deserters until late on Saturday night, being under the impression that Shellis was only six months' training man, and that his son had had his discharge. When he found they were deserters he advised them go back, and they were to have gone that morning, Shellis had been to say good-bye to his father, and defendant's son had wished his young woman farewell. He added that he had seven children at home. The Chairman said that, however leniently the magistrates would have liked to have dealt with defendant in these serious times, they would have to punish him as a warning to others. He would have to go to gaol for two months with hard labour."
"Harbouring Deserters"
Birmingham Daily Post : September 1st 1914 Page 2.