History of the Dog and Duck on High Street Aston in Birmingham in the county of Warwickshire.

Some history of the Dog and Duck

The Dog and Duck stood on the eastern side of High Street Aston. The building formed part of the development between Phillips Street to the south and Webster Street to the north. The pub is marked on the map below, along with the Waggon and Horses, more often than not the spelling of which was Wagon.

The large building between the two public-houses was the infamous 'House That Jack Built,' an independent department store fondly remembered by those who lived in the locality. From what I can gather it was not a rival to the luxurious city centre emporiums but a more down-to-earth place where you could buy everything from pots and pans to socks and a bit of lino for the kitchen floor, the sort of shop where people could have a good rummage. 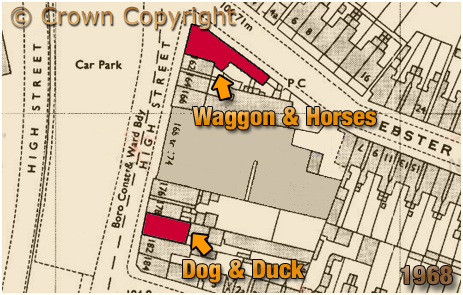 The map extract from the late 1960s is good for clearly showing the locations of the two public-houses not long before they would shut up shop. It also shows the redevelopment that had taken place along the High Street which had been widened and divided by a blinking car park of all things - as if the Newtown Shopping Centre was ever going to replace the old businesses that once lined Newtown Row and its continuation into High Street. 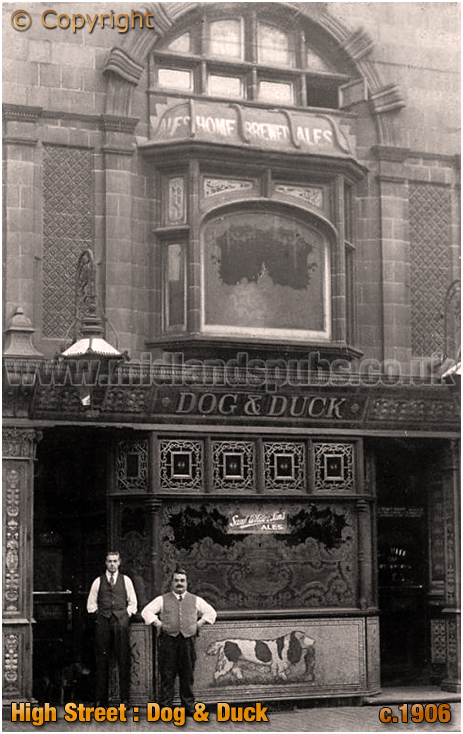 The Dog and Duck would become a part of the tied estate of Ansell's Brewery Ltd. However, the sign in the window featured in this photograph, shows that the pub was selling ales produced by Samuel White and Son, a brewery based behind the Bellefield Inn at Winson Green. Going back further in the timeline of the Dog and Duck it was once a homebrew house, as the old lettering on the lead canopy of the bay window clearly shows. 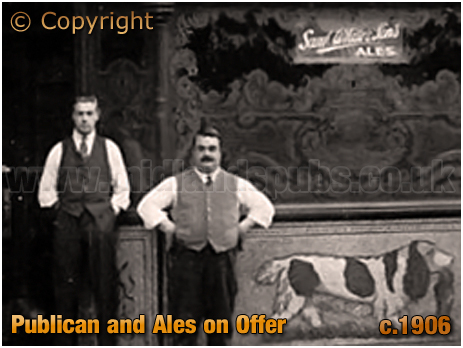 It is a shame that this building was not saved as it had an attractive frontage with plenty of ornate decoration. Clearly, long before Ansell's got their mitts on the place, some money had been lavished on the building's fabric.

The man who probably invested in the building was Edward Allen who was owner-publican in the late 19th and early 20th centuries. This is almost certainly him pictured with his hands on his hips standing on the pavement in front of the Dog and Duck. In earlier times he was recorded as a brewer so it is reasonable to assume that it was his homebrewed ales that were sold in the house.

Although still running the Dog and Duck in the Edwardian period, Edward Allen commuted to work. He had earned enough money to buy an artisan's house for his family on the Alcester Road in King's Heath. His daughters Emily and Annie probably travelled to work in his trap because they were recorded as barmaids in the census conducted in 1901. 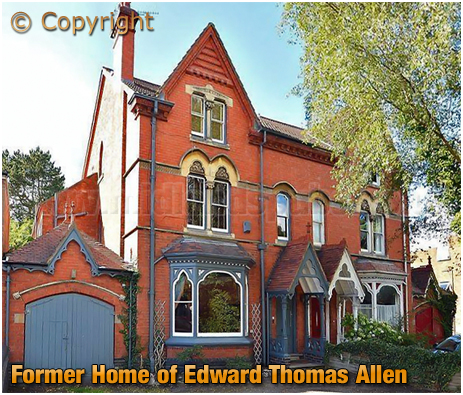 Born in 1851, Edward Allen came from humble beginnings and started his career as a steel pen tool maker. He continued in this trade when first running the Dog and Duck, a boozer that started life as a beer house. In fact, the Dog and Duck is rather unusual in that it did not gain a full licence until 1961.

In the early 1880s Edward Allen was running the Dog and Duck with his wife Ann. This was his second marriage as he had first tied the knot in July 1873 with Emily Doughty. Although he had spent his formative years in Brearley Street, at the time of his marriage he was living in Graham Street with his parents. His father worked as a glass cutter.

Edward Allen held the licence of the Dog and Duck for over forty years until his death in July 1920. This is up there with the longest serving spells of holding a Birmingham licence. Not that it was the end of the family's association with the Dog and Duck for his grandson Ebenezer Richard Allen became the man in charge of the beer house. His father, also name Ebenezer, the son of Edward Allen was also a publican.

Edward Allen was a witness of Ebenezer's marriage to Clara Pollard in March 1905. I wonder if that is Ebenezer in the photograph stood on the doorstep? Other members of the Allen clan were running public-houses around Birmingham.

By 1925 Ebenezer and Clara Allen had moved on and were running the Black Eagle at Factory Road, a house operated by Ansell's Brewery Ltd. It is likely that the brewery had taken over the Dog and Duck by this time. Ebenezer and Clara kept the Black Eagle for a number of years and, following retirement, moved to Sutton Coldfield. In the late 1930s they, along with their son Alfred who worked as an electrician, were living on College Road but they moved to No.153 Boldmere Road where Ebenezer died in May 1945.

At the outbreak of the Second World War the Dog and Duck was managed by Wilson and Florence Barratt. They were assisted by a live-in barman named John H. Spencer. Wilson Barratt was born in Ashted in 1908 and married Florence in April 1933.

If you have a genealogy story or query regarding the Dog and Duck on High Street Aston you can contact me and I will post it here in addition to including your message within the website pages for Birmingham Genealogy.

"A man, between 50 and 60 years of age, giving the name of Thomas Hill, residing in Hope Street, Birmingham, a shoemaker, but whose real name is said to be Brindley, is in the custody of Superintendent Bloxam, at Aston, on a charge of "raising the wind" in the following ingenious manner: On the Friday last he went to the house of Mr. Baker, the Dog and Duck, Aston, and with an air of patronising confidence told Mrs. Baker that he had come to give her a little order. He was employed at the mill of Mr. Boddington, and having a nephew who was just taken on in the establishment, he was about giving the men a treat of a couple of gallons of ale, and having heard a good account of the Dog and Dock tap he had ran down for it. With many thanks Mrs. Baker proceeded to fulfil the order, and while doing so the man from the mill all at once exclaimed, "Oh! Mrs. Baker, I have a sovereign to receive just close by, and I'm short two and sevenpence to give in change; lend it me for a minute or two and I shall be back before you have the jar ready." The thing was said so plausibly that the 2s. 7d. was handed over to the fellow, who hurried out, entreating Mrs. Baker to make haste as he should be back in a "jiffy." How long a jiffy is we know not, but time flew, and as the man from the mill did not return enquiries were made at the mill, when it was at once discovered that no such man was employed there, and that thirty or forty persons had been there enquiring after a man who had borrowed different sums of money, the majority of them being "Just two and sevenpence," under precisely similar circumstances. When it is known that he is the guest of Mr. Superintendent Bloxam, at the Aston lock-up, there is no doubt many of the victimised will pay their personal respects to the patronising "man from the mill" in his retirement. The hearing of the case will come before the Magistrates at Erdington, on Friday next."
"An Artful Dodger"
Birmingham Daily Post : May 24th 1859 Page 2