History of the Royal Exchange on High Street Aston in Birmingham in the county of Warwickshire.

Some history of the Royal Exchange

The Royal Exchange stood at the 'top' end of High Street Aston and was on the apex corner of two of the roads forming the Six Ways. Although the official address of the public-house was No.1 High Street, the house also had a substantial frontage to Alma Street. Brave punters in the old days could nip into the Royal Exchange and contemplate a bender by following either road. One could walk down Alma Street and Summer Lane, having a half-pint in each tavern and be in a right state by the time Snow Hill was reached. Alternatively, there were plenty of watering holes along the High Street and continuing into Newtown Row. Few people could have made either journey without being a stretcher case. It is incredible to think that the taverns have almost completely vanished. In fact almost every other building has also gone! 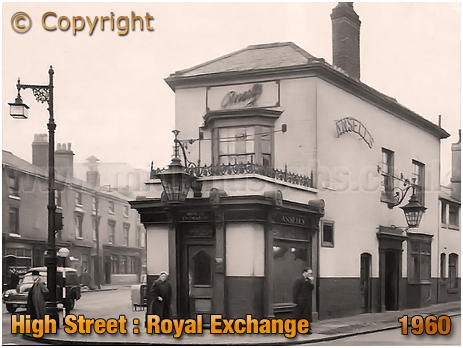 This image of the Royal Exchange was taken in 1960. The High Street is to the left of the pub and Alma Street to the right. This photograph was captured at the start of the 'swinging sixties' - sadly, the only thing that swung here in the 1960s was the wrecking balls of the contractors working for the council who determined that anything old should be removed from the landscape.

The Royal Exchange was nearing the end by the time of the above photograph. The premises closed for trading on January 21st, 1961. The licence of the property was held in suspense until it was finally surrendered in 1969 in order for a licence to be granted to The Gladiator at Highter's Heath, a hideous building erected at the Bells Lane Shopping Centre. In fact, the latter building was so appalling to the eye I am inserting a photograph of the inn sign here instead as at least the signboard had some merit. The pub itself saw more violence than a Roman amphitheatre and was eventually shut down and converted into a private members club. 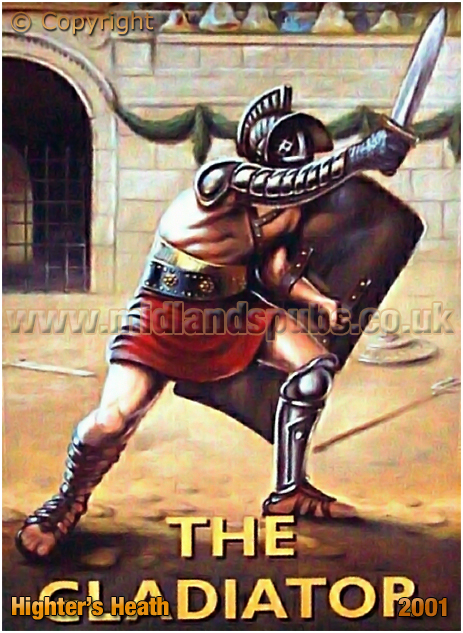 As can be seen in the photographs, the Royal Exchange was operated by Ansell's Brewery Ltd. The company certainly held a long lease on the building though I am not sure if the brewery ever did acquire the freehold. The owner of the property at the start of the 20th century was Ralph Affleck. The former farmer also operated The Angel on Coleshill Street. 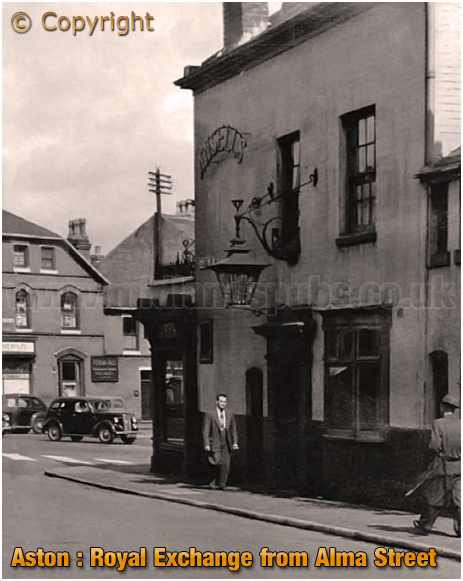 I am not sure of the exact date of this photograph but looks to be early 1950s. The image may have been captured during the period when John and Doris Abdale were running the public-house for Ansell's Brewery Ltd. The couple, who had married in 1935, had earlier run the Wellington Inn on Holliday Street. They must have been well regarded by the regional manager for they were later appointed as managers of the Tyburn House which, at the time, was something of a flagship pub for the Aston brewery.

If you have a genealogy story or query regarding the Royal Exchange on High Street Aston you can contact me and I will post it here in addition to including your message within the website pages for Birmingham Genealogy.

"At the Aston Petty Sessions yesterday, before Messrs. S. S. Lloyd and A. S. Evans, Samuel Beckett, a gunmaker, who lodges in Alma Street, Aston, was charged with robbing and assaulting John Boden, a gentleman of independent means, residing in Baker Street, Lozells. About noon on Monday, the 7th instant, Mr. Boden went into the Royal Exchange, High Street, Aston New Town, where he met the prisoner and another man, whom he treated to some beer. He subsequently went with them into the Good Samaritan and the Royal Oak, Lozells Lane, in both of which he treated the two men. He did not go home until about six o'clock, and when he did so the two men whom he had been treating followed him, and when just by the Chain Walk they knocked him down and robbed him of his gold watch and about £2. 2s. in money. Beckett took his money, and the other man, who has as yet managed to keep out of the way of the police, took his watch. The prisoner was remanded for a week, in order that further inquiries might be made."
"Charge Of Robbery With Violence"
Birmingham Daily Gazette : December 17th 1868 Page 4