History of the Scotch House on High Street Aston in Birmingham in the county of Warwickshire.

Some history of the Scotch House

If you landed on this page looking for information on the Crown and Cushion then you are in the right place because this public-house was known as the Crown and Cushion until the mid-Edwardian period. The building stood on the south corner of Whitehead Street and traded until the evening of August 28th, 1962 when the bar towels were hung up for the last time and the door bolted for good. It would not be long before the demolition team moved in and removed all trace of this part of Newtown's social fabric. 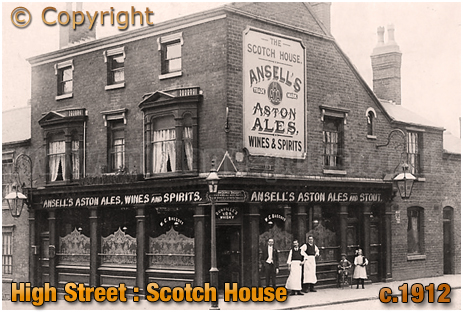 This photograph of the Scotch House most probably dates from 1912. The pub's name changed about four years prior to this when Albert Butler was the licensee. By the time of this photograph he was running the Queen's Head at Erdington. The publican you see here is William George Baggott who previously kept the Woodman Inn on Duddeston Row. He looks rather dapper in this photograph. Next to him are two employees in their long aprons. The girl in the photograph is probably William Baggott's daughter Ivy. This would tie in with her age which was recorded as eight years-old in the 1911 census when the family were living at the Woodman Inn. Next to the girl is a young boy on a tricycle. This is probably William's son but he was not recorded living with them in 1911.

As can be seen in this photograph, the Scotch House was operated by Ansell's Brewery Ltd. Like the nearby Royal Exchange, the company held a long lease on the building. The owner of the property was Louisa Grice-Hutchinson, wife of an army officer and resident of The Boynes at Upton-on-Severn. She was the only child of Reverend William Grice of Sherborne.

William Baggott kept the Scotch House with his wife Gertrude. They employed Emma Haddock as a general servant and she lived on the premises with the family. William Baggott married Gertrude Prigg at Aston in 1902. 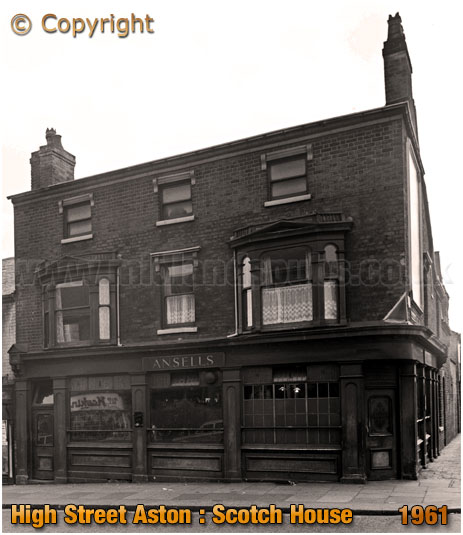 William Winkles was the publican running the Crown and Cushion, as the pub was then known, in the early 1860s. Born in 1797, he and his wife Mary had earlier run the Castle beer house on Upper Hospital Street. The former gun-maker was documented as a retail brewer so it is likely that his homebrewed ales were sold at the Crown and Cushion.

Mary Winkles died in 1852 when her husband was running The Castle. He re-married in 1854 to the gun-maker Elizabeth Walker, a local resident in Upper Hospital Street. The couple moved to the High Street to run the Crown and Cushion but Elizabeth died in 1866. The publican married for the third time in August 1867, this time to the widow Sarah Leonard. She was widowed again in December 1869 when William Winkles died. Later in that month the licence of the Crown and Cushion was transferred to his son Henry.

The licence of the Crown and Cushion was transferred from Emma Winkles to Edward Whitlock in January 1876. The 1881 shows that James and Emma Denton were managing the house listed as a Spirits Vaults.

I have not looked into this public-house in any detail. However, I do have these excellent images of the property that date from February 27th, 1962. On this date the Scotch House had only six months left to go and it would all soon be another pub consigned to history. 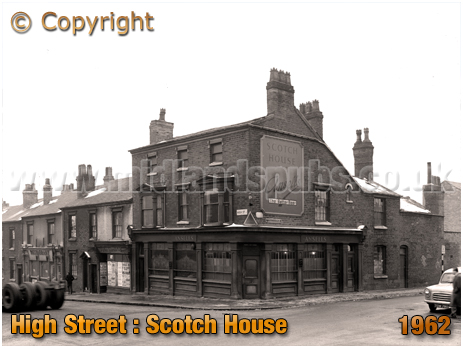 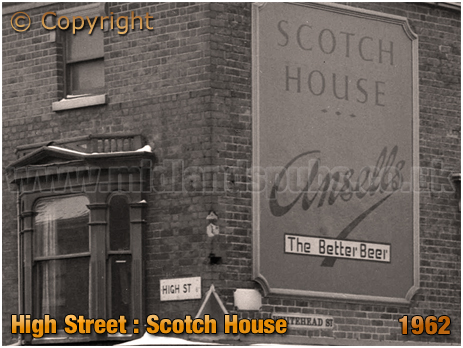 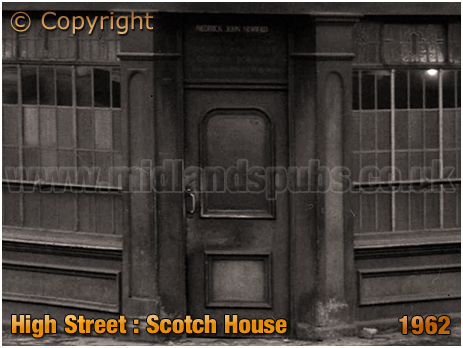 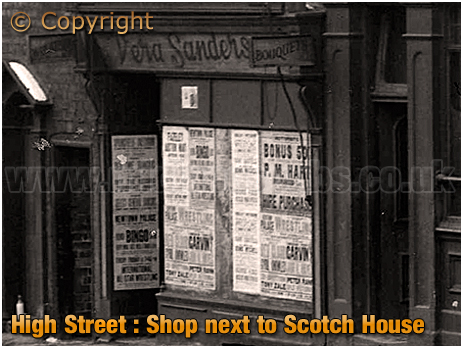 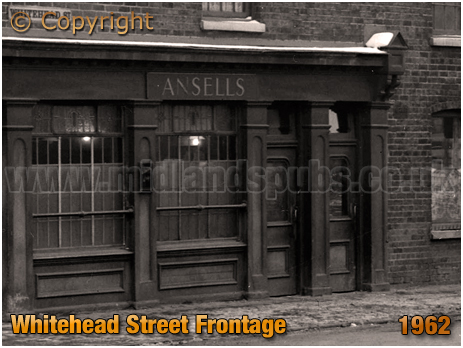 If you have a genealogy story or query regarding the Scotch House on High Street Aston you can contact me and I will post it here in addition to including your message within the website pages for Birmingham Genealogy.

"A case of considerable importance to sick and dividend societies was heard when Charles Dickens, 2, back 6, Inkerman Street, Aston, sought to recover from the Scotch House Friendly Sick and Dividend Society the sum of 56s., nine weeks' to which he held he was entitled. Charles Cottrell, the secretary of the society, which meets at the Scotch House, High Street. Aston, was cited as defendant. The society expelled Dickens in November last and declined to make any further payments on account of sickness on the ground that he concealed the state of his health at the time of his admission two years ago. It was stated by the society that he suffered from a spinal disease. Alfred James, president of the society, said he had known Dickens as an invalid for years, but he was not aware he was a member the society until recently. There was no medical examination on admission, but the man would be questioned by members of the committee. Two members of the society had made a declaration that Dickens was a fit and proper person to join. The stipendiary said the case was absolutely clear. Nothing had been brought forward to show that any untrue answers were made to the questions of the committee. Further, he did not consider the abscesses from which Dickens had suffered up to the time of admission constituted a complaint which would disqualify him from membership according to the rules. He made an order for the payment of 56s. sick pay and costs. Dickens pointed out that he had been expelled by the committee, and asked if he was still a member. The Stipendiary: "You will have take action if necessary on that point."
"Claim Against a Friendly Society"
Birmingham Daily Post : January 11th 1917 Page 2 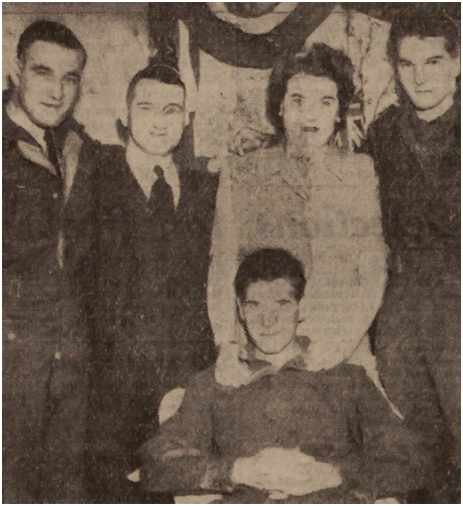 "All three sons of Mr. and Mrs. A. Moore, of the Scotch House, High Street, Aston, met by coincidence at home yesterday. Leonard, who enlisted in September, 1942, is a D-Day boy, and was one of the first to enter Brussels. Thomas, home after four years in the Middle East and India, was captured at Bardia in 1941, but escaped, with 300 others, 34 days later, and returned to his unit. Howard went abroad in July last as a despatch rider. He was wounded in Nijmegen in March. Left to right are Thomas, Mr. and Mrs. Moore, Leonard, and, in front, Howard."
"Reunion"
Evening Despatch : April 25th 1945 Page 3