History of the Coach and Horses on High Street Bordesley in Birmingham in the county of Warwickshire.

Some history of the Coach and Horses

The Coach and Horses stood on the northern side of High Street Bordesley, quite close to the junction of Coventry Road. 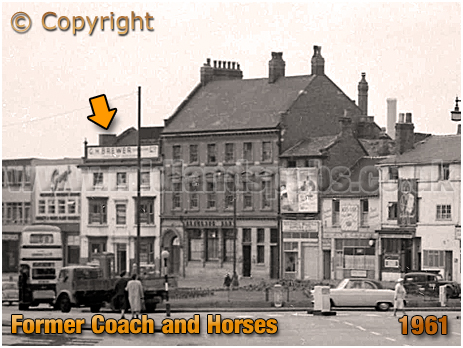 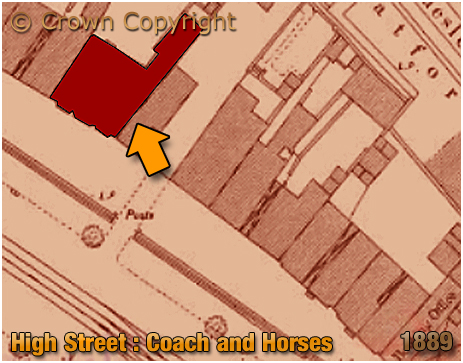 If you have a genealogy story or query regarding the Coach and Horses on High Street Bordesley you can contact me and I will post it here in addition to including your message within the website pages for Birmingham Genealogy.

"Yesterday afternoon an inquest was held at the Coach and Horses, High Street, Bordesley, before Dr. Birt Davies, touching the death of Harry Lowe, aged six years, which took place on Monday afternoon last. Mr. J. W. Cutler, solicitor, was present to watch the case on behalf Mr. Richard Taylor, of the "Rising Sun" public house, High Street, Bordesley, by whom deceased is alleged to have met his death from a blow given him on Wednesday, the 7th inst. Ellen Lowe, wife of John Lowe, 21 Court, High Street, Bordesley, file manufacturer, deposed that on the day in question she was going out of her house up the yard to the pump for some water. The deceased was running down from the top of the yard when Mr. Taylor came from his back door, ran to the boy, and struck him on the back of the neck. He immediately said: "Missus, the children are always in mischief," and went back into the house. The blow did not knock the deceased down. It was not a hard blow, or it would have done so. There had never been any ill-feeling between her and Mr. Taylor, but she had heard him threaten the children for playing with the bowls on the bowling-alley, in the public-house yard. The deceased cried very much, and went into the house, and sat down on the sofa. He went to bed that evening as usual, and she did not hear him complain until Friday morning, the inst., between nine and ten o'clock. He then said his legs and arms ached very much. During that night he asked several times for some water, which he did not usually do. On the next day he seemed feverish, and ate no food, but complained of being very thirsty. On the Saturday afternoon, about five o'clock, witness sent for Mr. Robins, surgeon, who gave him some medicine, and ordered the boy a bath. During Saturday night he was very restless. On Sunday morning he was a great deal worse, and quite light-headed, and he died on Monday afternoon, a quarter before one o'clock. In reply to a question from Mr. Butler witness said that Mr. Taylor struck deceased with his clenched fist. Mr. Robins stated that he had made a post-mortem examination of the body of deceased, but the Coroner said as the deceased was alleged to have met his death from a blow he should wish a more minute examination be made. The inquest was accordingly adjourned until Tuesday next for that purpose."
"Supposed Manslaughter"
Aris's Birmingham Gazette : May 17th 1862 Page 6

"Yesterday, Dr. J. B. Davies [Borough Coroner] held an inquest at the Coach and Horses, High Street, Bordesley, touching the death of Jeremiah Briggs, aged 57 years, draper, and a married man, who had recently lodged at the Britannia Inn, Bordesley, and who had committed suicide under the circumstances briefly recorded in yesterday's Gazette. From the evidence adduced it appeared that the deceased, who had been an intemperate man for many years, and, in consequence, unsuccessful in business, sold the household goods which had been provided for him by his friends, and parted with his wife about five weeks ago. He had been living at the Britannia Inn for about a fortnight. On Friday last he did not rise at his usual time - it being his custom to come downstairs for a pint of beer at seven o'clock, then to bed again and rise at about ten or eleven o'clock in the morning, and in consequence of this the door of his bedroom was forced open by Police Constable Smith and another constable, who were called in. The deceased was found lying on the bed quite dead, and on a chair were found four small bottles, each labelled, "Laudanum : Poison;" and a glass out of which the unfortunate man had evidently drank some of the contents of the bottles. Dr. Savage, who had made a post-mortem examination of the body of the deceased, stated that the brains and lungs were congested, and in his opinion the congestion was caused by poisoning. The deceased had recently been of unsound mind, and the jury returned a verdict of "Committed suicide in a state of insanity."
"The Suicide in Bordesley"
Birmingham Daily Gazette : April 26th 1870 Page 3