History of the Coachmakers' Arms on High Street Saltley in Birmingham in the county of Warwickshire.

Some history of the Coachmakers' Arms

The Coachmakers' Arms stood on the southern side of High Street Saltley, almost halfway between Hereford Square and Adderley Road, and almost opposite Gate Street. The pub seen below was built on the site of an older tavern of the same name and on the same site during 1894-5.

The High Street was bound to have a pub bearing this name as the extensive works of the Metropolitan Railway Carriage and Wagon Company Ltd. was a short distance away from the building. The factory site was established in 1845 when the former stagecoach builder and operator Joseph Wright moved his carriage works from London to six acres of meadowland at Saltley. The business was continued by his sons and was registered in 1862 as a Limited Company with the Metropolitan name. By this time the firm employed over 1,300 people. The workforce grew as the company expanded the original site. The business amalgamated with four other major companies and the whole undertaking was eventually acquired by Vickers Ltd. and merged with Cammell Laird and Co. to become Metropolitan-Cammell Ltd. 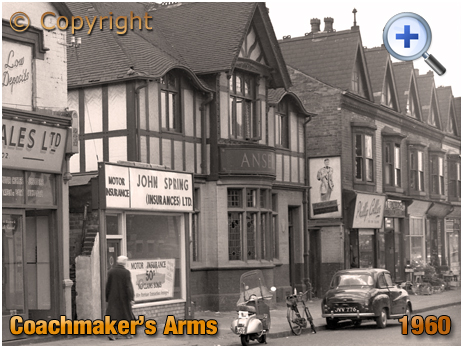 I have not researched this public-house in any detail. However, I thought I would upload a photograph so at least there is something to look at. I have also included the names of a few licensees. So, better than a blank page but a lot of work needed. In the meantime, there is lots of information on Birmingham dotted around the website - click here for a suitable starting place.

If you have a genealogy story or query regarding the Coachmakers' Arms on High Street Saltley you can contact me and I will post it here in addition to including your message within the website pages for Birmingham Genealogy.