History of the Gate Inn on High Street Saltley in Birmingham in the county of Warwickshire.

Some history of the Gate Inn

Demolished for a road-widening scheme in 1989, the Gate Inn stood on the northern side of High Street Saltley, close to the junction of Washwood Heath Road and Alum Rock Road. The latter was the older route from the crossing of the River Rea before a new turnpike road was created across Washwood Heath. These roads were key routes to both Castle Bromwich and Coleshill and a toll had to be paid at a gate here in order to travel along the turnpike. 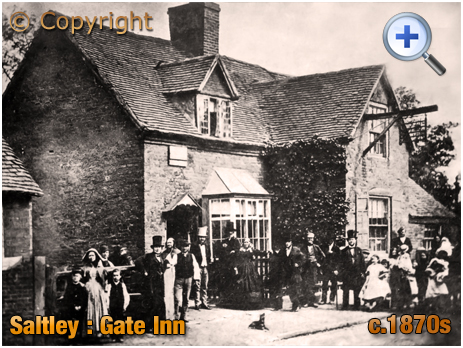 The Gate Inn was rebuilt in 1879. However, the above image shows the earlier tavern that stood close to the turnpike gate. Perhaps the gathering is a send-off to the old place before the rebuild started? Note the top hats worn by some of the men - bowlers and flat caps were not so common in those days! Note also the gate inn sign. Today, it is possible to find miniature gates as inn signs, particularly those called the Gate Hangs Well bearing the phrase "This Gate Hangs Well and Hinders None, Refresh and Pay, and Travel On."

The road to Coleshill is an ancient route and was documented in the mid-15th century, though it is almost certainly of greater antiquity. Due to the topography and terrain, the roads were liable to flooding and this made travel difficult. Hutton wrote in 1781 that at Saltley 'every flood annoys the traveller,' so the area benefited greatly by the new turnpike across the heath established in the 1760s. It is not known for certain if the Gate Inn pre-dated the road improvements. Hutton wanted a causeway to be built to raise the road above the areas which flooded the worst and, despite a fee being required to pass through Saltley Gate, criticised the turnpike trust for lack of investment on infrastructure.

The area around the Gate Inn was rural in character when the turnpike was created. Farmsteads were dotted around meadowland and heath with the Gate Inn serving as a locus for the locals who would see travellers passing through or perhaps calling in for refreshment. Many of the farms in Saltley were run by tenants, the owners being Sir Lister Holte of Aston Hall and/or the Adderley family of Hams Hall.

The Corfield family were running the Gate Inn at the end of the 18th century. Thomas Corfield was mine host until his death in 1804. He had married widow Isabella Middleman at Aston in April 1786. Corfield Terrace, a row of houses off the High Street, may have been named after this family.

Thomas Midlam succeeded the Corfield's, though he must have been working at the Gate Inn before becoming licensee. When he died in 1850 it was reported that the 74 year-old had "resided nearly the whole of his life" at the Gate Inn. Moreover, it was stated that "he was respected by all who knew him as an upright and honest man."

Jane Lewis kept the Gate Inn for much of the 1850s and until her death in Janury 1866. According to later rate books of the 1880s and early 1890s the building was owned by a Jane Lewis so the family were owners of the Gate Inn when it was rebuilt at a time when leased to James Townson. Jane Lewis, a spinster, was probably the daughter of the retired jeweller Jesson Lewis who, I assume, funded the acquisition of the property. When she died her nephew Henry Jesson Lewis, a music teacher, was a key beneficiary. In July 1871, three years before his death, he married Alice Lord at Holborn in London. Subsequently, she became the owner of the Gate Inn.

It is possible that Alice Lewis never even saw the Gate Inn. She was living in Shepherd's Bush when the family sold her interest in the building to Mitchell's and Butler's in 1925. However the Cape Hill brewery's route to operating the Gate Inn was a little more complex. The company first bought the lease in December 1919 from Messrs. Townson Bros. Limited who had a bottling stores next to the public-house. The family, originally from Liverpool, operated a wines and spirits business and were involved in a number of pubs around Birmingham. I suspect that it was Townson's who, having secured a long lease for the Gate Inn, were responsible for its rebuilding. James Townson was known to invest in the houses that he operated. For example, he refitted the Victoria Inn on the corner of Duddeston Mill Road and Inkerman Street. 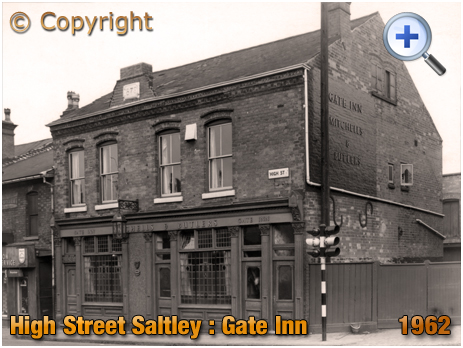 In this photograph taken in February 1962 it is possible to see part of the old bottling stores behind the public-house. Served by the double gates, the area to the side of the building would be used as a timber yard in later years.

Charles and Emily Waldron kept the Gate Inn during the early 1880s. They were helped by two of their daughters, Isabella and Elizabeth, who worked as barmaids. When working as a caster, Charles Waldron had married Emily Coley in 1855 at the Church of Saint Peter and Paul at Aston. He died at a relatively early age in July 1881 and the licence passed to Emily. She would later re-marry and lived until 1915.

Howard and Minnie Gebhard were managers of the Gate Inn during the early 1930s. His father was born in Germany but found himself serving in the Royal Field Artillery during World War One. He married Jemima Goodfellow in 1920 but she died when running the Gate Inn during March 1933. He re-married in June 1934 to Quilla Causier. The couple remained at the Gate Inn until 1940. In the post-war years they were running the New Inn at Harborne. They were succeeded by John and Eliza Whitaker who moved from the White Swan on Legge Street. They would run the Gate Inn for 20 years.

If you have a genealogy story or query regarding the Gate Inn on High Street Saltley you can contact me and I will post it here in addition to including your message within the website pages for Birmingham Genealogy.

"On Tuesday night, as Mr. Mole, jeweller, New Street, was returning from Castle Bromwich at about twelve o'clock in a four-wheeled carriage, accompanied by Mrs. Mole and Mr. Leggatt, superintendent of the first division of the Borough Police Force, the horse which is very spirited, shied at some object by the roadside, near Washwood Heath, the sudden jerk throwing Mrs. Mole and Mr. Leggatt out of the carriage. The horse ran away with the vehicle, Mr. Mole being unable to stop it until he arrived at the Saltley turnpike gate, which was closed. He was luckily unhurt, as was also Mrs. Mole; but we are sorry to say that Mr. Leggatt's injuries are rather serious, though he is now progressing favourably."
"Carriage Accident"
Birmingham Daily Post : August 5th 1864 Page 2

"Edward Bright, potato salesman, Summer Bow, Birmingham, was summoned for refusing to pay the toll at Saltley turnpike gate, and also for assaulting Thomas Hender, the tollgate keeper. Hender was charged on a cross summons with having assaulted Bright. Mr. Phillips appeared for Mr. Bright, and stated that on the 7th inst. his client had occasion to go to Castle Bromwich on business, and took his servant girl and two children with him in the trap. On reaching the Saltley tollgate he slackened the pace at which he was driving, and walked the horse quietly through the bar, but finding no one there to receive the toll he went on. Directly afterwards the defendant Hender ran up and seized the horse's head, endeavouring to take the horse and trap back to the tollgate. Mr. Bright tendered the fare, and told the defendant to release the horse. He then alighted from the trap and went up to Hender, who instantly seized him by the throat. Mr. Bright replied that he should not allow him to treat him like a dog, and took hold of the defendant by the collar of his coat, and held him for a time, but no blows were struck. Witnesses were called to prove that Hender was the first to seize Bright by the throat, and that he refused to receive the toll when offered. The case on behalf of Header was that Bright drove through the tollbar at the rate of eight miles an hour; that he did not offer the toll to Mrs. Hender, who was standing at the door, and that he refused to stop when requested. Hender and one or two witnesses stated that Bright did not offer to pay the toll till he had torn Henders shirt collar. Mr. Bedford said it was clearly proved that Mr. Bright had passed through the tollgate without paying any toll, and he would be filled l0s. and costs for that offence. Both assault cases would be dismissed."
"Refusing to pay toll"
Birmingham Daily Post : April 13th 1876 Page 6

"Richard Gough, of 61, Teal Road, polisher, charged with causing the death of William Shore in a quarrel outside the Gate Inn, Saltley, was brought up on remand before the Stipendiary at the Birmingham Police Court today. The evidence given at the inquest yesterday was repeated, and prisoner was formally committed to the Assizes, the same bail being allowed as before - prisoner in £20., and two sureties in £10. each."
"The Saltley Manslaughter Case"
Birmingham Daily Mail : May 17th 1900 Page 2