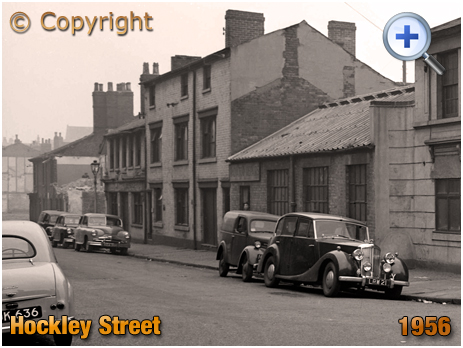 "A fire, resulting in considerable damage to property, occurred early yesterday morning, at the works of Messrs. J. Hink and Sons, Patent Duplex Lamp manufacturers, Great Hampton Street and Upper Hockley Street. The building faces Great Hampton Street, and extends for a considerable distance along Upper Hockley Street, and it was in the latter portion, in which the manufacturing processes have been carried on, that the fire broke out. This part of the manufactory has a three-storey frontage to Upper Hockley Street, and extending from the back, at right angles, are two wings - one two storeys and the other three storeys in height, On the ground floor of the right wing looking from the street was the stamping shop, and it is believed the fire originated there, though from what cause is not known. Over this shop was the lacquering shop, containing three drying stoves. On the same storey as the lacquering shop, in the front portion of the building, and also in the loft wing, was the fitting department; while on the top storey was the department where the burners for the lamps were made. The fire was discovered about half-past two o'clock by a policeman, who, on passing by, noticed smoke issuing from the premises. The policeman at once gave an alarm to the keeper of the premises, and the information was conveyed to the Fire Brigade in Little Cannon Street. The brigade with their appliances were promptly in attendance. In the meantime Mr. Ruddock, who was in charge of the premises, brought into use the three fire extinguishers which were kept on the premises, and did everything possible with those to prevent the fire spreading beyond the block of building where it originated. The fire, however, spread with great rapidity from the stamping shop to the lacquering shop above, thence to the fitting shop, continuing an upward course, to the burner shop on the top storey, until the whole of that portion of the shopping was one mass of flame. When the brigade arrived it was seen that any attempt to save the block of building in which the flames first presented themselves would be utterly futile. All that could be done was to prevent the fire from spreading to the side and front buildings overlooking the two thoroughfares, Great Hampton Street and Upper Hockley Street. In consequence of the frozen condition of the ground some little delay was experienced in getting at the water, but when a stream was at length obtained the supply proved to be in every respect satisfactory, and by its aid strenuous efforts were made to check the progress of the flames. To do this, however, was a matter of considerable difficulty, for the fire had made terrible headway, and was blazing with a fierce glare which lighted up the whole neighbourhood and attracted the attention of persons residing at a great distance. In the wing where the fire broke out were stamps, presses, and other machinery used in the manufacture of lamps, and also a large assortment of unfinished work which has been destroyed; for that portion of the shopping was completely gutted from end to end. The prompt measures taken by the brigade, under the superintendence of Captain Tiviotdale, were successful in saving the remainder of the block from a similar fate, but the contents of the fitting room and the burner room, one of which was ninety-two feet long and thirty feet wide, were nearly all destroyed, and the machinery and what work remains are greatly damaged. The roof of the building was almost entirely burnt off. The front block in Great Hampton Street, where the chief offices, showrooms etc. are situated, is untouched, and so also is a portion of the buildings which face Upper Hockley Street, but the damage is nevertheless considerable, being estimated at £15,000. The flames were not got under much before six o'clock, the steam engine being vigorously employed the whole of the time. We understand that about 200 hands will be thrown out of employment in consequence of the conflagration. The building and contents of Messrs. Hinks's premises were insured in the Royal and the Lancashire Offices. During the progress of the fire Major Bond, Superintendent Shaw, and a number of police officers were present to render what assistance they could, but owing to the time, comparatively few persons assembled."
"Serious Fire in Upper Hockley Street"
Birmingham Daily Post : January 30th 1879 Page 5