History of The Dolphin on Hospital Street Aston New Town in Birmingham in the county of Warwickshire.

Some history of The Dolphin

The Dolphin stood on the western side of Hospital Street, on the northern corner of Frankfort Street. 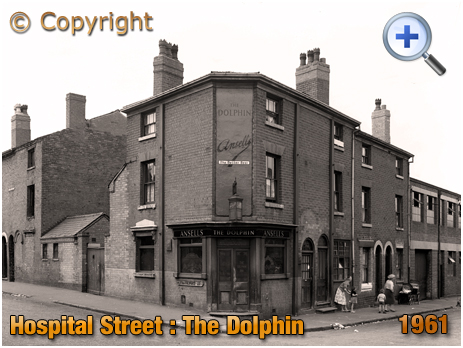 Note: George Hall Leslie was later licensee of the Empire Inn at Tamworth.

If you have a genealogy story or query regarding The Dolphin on Hospital you can contact me and I will post it here in addition to including your message within the website pages for Birmingham Genealogy.

"Yesterday afternoon, Mr. Pemberton, coroner, held an inquest at the Victoria Courts touching the death of William Stevens [60], 71 Frankfort Street. Mrs. Stevens said that the deceased had been a heavy drinker for some years. During the last two or three weeks he had not done any work, but had been drinking heavier than ever. She did not know where he got the money from. On March 15th he left home, and he she had not since seen him alive. She was told on the 6th inst. that he had taken poison, and had been removed to the Workhouse Infirmary, where he died. Seventeen years ago he attempted to commit suicide by cutting his throat, and then he had been drinking heavily. John E. Clenton, landlord of the Dolphin beer house, Hospital Street, stated that the deceased came to his house on the 6th inst., and asked for half-a-pint of beer. He said that he was ill, and was allowed to go into the kitchen to sit down. Permission was given, and it was then discovered that he had taken a dose of ammonia. He was removed to the General Hospital, but as there was no room there an emetic was given to him, and he was conveyed to the Workhouse Infirmary, where he died on the 11th inst. from inflammation of the lungs. It was not thought that the taking of the ammonia influenced death. The Coroner said it was an unhappy history of a death from excessive drinking. The jury returned a verdict of "Death from natural causes."
"Inquests in Birmingham"
Birmingham Daily Post : April 15th 1893 Page 5