History of the Fox Inn on Hurst Street in Birmingham in the county of Warwickshire.

Some history of the Fox Inn

This pub tended to be included within records for Inge Street for much of its early history, though it had an address in both Inge Street and Hurst Street in later years. I am listing it in both street pages to avoid further confusion. 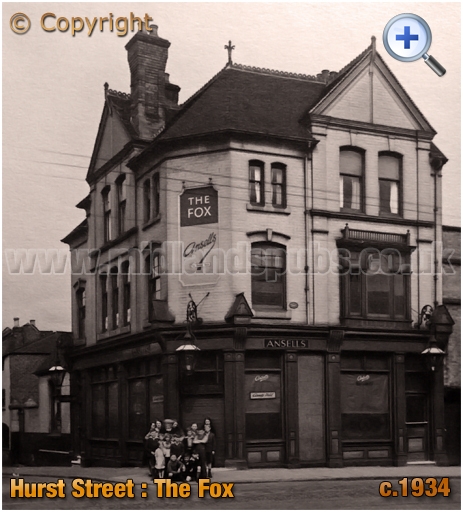 This photograph was taken in 1934, the year in which the public-house became part of the tied estate of Ansell's Brewery Limited. If you compare this image with a more recent photograph then you will see that, apart from the loss of some fittings and a different paint job, little has changed on the exterior. The removal of the large lanterns has detracted from the building's character somewhat. Sadly, the interior of The Fox has been drastically altered though a few fixtures and fittings remain from an earlier period.

You will also notice on the 2002 photograph that the pub is called the Old Fox and that a logo on the fascia states that the pub was established in 1891. This is a curious thing to display on the pub's frontage because, firstly, construction on the Fox you see here was not started until the following year and, secondly, the original Fox Inn dated back to the late 18th century. Perhaps they mean the relationship that the pub has enjoyed with the Hippodrome Theatre - but even this date is incorrect. 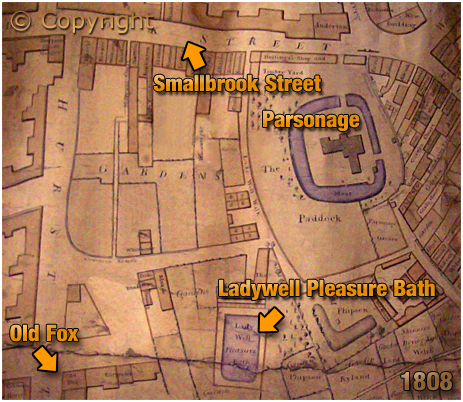 The term 'Old Fox' is not new to the pub - the original building was trading under such a name in the early 19th century when William Kimberley was the publican. Perhaps this was to distinguish the house from other taverns named The Fox. In 1801 Thomas Hughes kept The Fox in Castle Street whilst Joseph Wilshaw was running a similarly-named tavern in Fox Street. Here in Hurst Street the Old Fox name was shortened to The Fox in later years, with the appendage of inn and hotel to reflect the status of the house. However, in the early 19th century the house was definitely known as the Old Fox. Indeed, the pub is marked as the Old Fox on a plan dated 1808 [above] which shows that the building faced onto a small square. Notice the Ladywell Pleasure Bath a few yards to the east of the Old Fox. A cold water spring arose here and the water's clear, soft qualities led to the pool being named in honour of the Virgin Lady Well. The Parsonage for St. Martin's is clearly marked on the map as, indeed, are the moats that surrounded it.

William Kimberley was almost certainly the first publican of The Fox. Born in 1747, he was possibly related to John Kimberley, a gimblet and bitmaker at Castle Street. In 1788 William Kimberley was listed as a victualler at Bow Street within Charles Pye's Directory for Birmingham. This was almost certainly at the Wheatsheaf as the other tavern in Bow Street was the Hen and Chickens but this opened at a much later date as a beer house. As a widower William Kimberley married Catharine Harper at St. Martin's Church in June 1792. The couple had a son in early 1797 and named him William. During the following year William Kimberley appears in the Land Tax Redemption records for Hurst Street where he is listed as the leaseholder of land owned by Sir Thomas Gooch of Benacre Hall, Suffolk. However, in the same year he is listed, along with Thomas Kimberley, as the leaseholder of four houses and shops in Inge Street. Land ownership was a little complicated where the two estates met near the Ladywell Pleasure Bath.

William Kimberley died in March 1814 aged 67 and the licence of the Old Fox was transferred to his wife Catherine, better known as Kitty. She kept the tavern for a couple of years before it was taken over by John Wall. His stay was brief and James Lawley became the publican in 1819. 1824 was a life was one of ups and downs for James Lawley. His son George, aged 17, passed away after a lingering illness. Later in the same year the publican re-married at Aston on November 23rd to Elizabeth Payton of Bromsgrove Street. In December 1828 he advertised the Old Fox through an agent [see above] who advised that the publican was 'declining the business.' In the following month the publican suffered another tragedy when, Phoebe, his eldest daughter, died aged 25.

William Brookes was the man who responded to the advertisement and took over the Old Fox in 1829. In February of the same year he was married at St. Martin's Church to Ann Hughes. She was the daughter of James and Elizabeth Hughes of Carrs Lane. The Old Fox Inn would pass to other members of the Hughes clan in 1839 when Erdington-born Richard Greensall took over the licence. Two years earlier, on May 24th, 1837, he had married Mary Hughes at Solihull. William and Ann Brookes vacated the Old Fox to run the Woolpack on St. Martin's Lane. 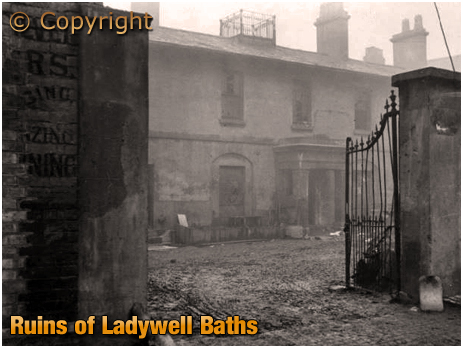 Those running the Old Fox were ideally positioned to offer complementary refreshments for those visiting the nearby Ladywell Baths. In 1831 the baths were extensively refurbished and improved by the owner Mr. Monro who advised the public that a new powerful steam boiler had been installed that could "accommodate patrons with just five minutes' notice with Baths in either Wood or Marble, of the artificial Waters of Cheltenham, Harrogate, Leamington. Salt Water, Shower Bath etc." The business seemed to promote the healing properties of the baths as opposed to the uplifting or enriching experience for the consumer. 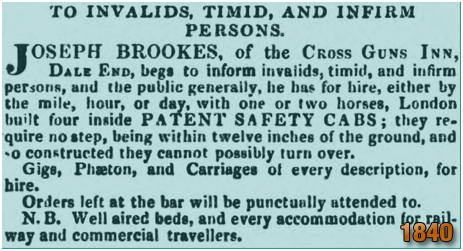 Richard Greensall and Mary Hughes kept the Fox Tavern for a couple of years before the name of Brookes was placed over the entrance again. Joseph Brookes was seemingly a publican with a great deal of entrepreneurial flair. Prior to moving to the Fox Inn he kept the Cross Guns Inn at Dale End where he combined his role as victualler with that of transport operator. Moreover, his business model was pitched at a specialised market in that he catered for those less physically able.

At the Fox Inn, Joseph Brookes spotted another business opportunity. Obtaining an outside licence, he teamed up with Walter Monk of the neighbouring Anchor Tavern in order to operate a booth at Sutton Races. He would later combine much of his skills and experience as victualler, outside caterer and transport operator to offer omnibus services to-and-from such events around the region.

The members of the Tantivy Court of Ancient Foresters' used to meet at the Fox Tavern and publican Joseph Brookes was once a Chief Ranger. In 1849 when he departed as publican he was presented with a "handsome silver snuff box, in testimony of his services, and as a memorial of their friendship and esteem." Joseph Brookes concentrated on his transport business and was later recorded as an omnibus and funeral carriage proprietor employing 12 men. 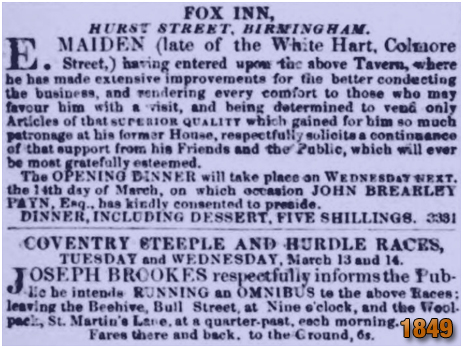 This extract from the Birmingham Journal dated 10th March 1849 features both the new incumbent of the Fox Inn, along with an advertisement for an omnibus service to the races at Coventry by the outgoing publican Joseph Brookes.

If you have a genealogy story or query regarding the Fox Inn on Hurst Street you can contact me and I will post it here in addition to including your message within the website pages for Birmingham Genealogy.