History of the Great Western Inn on Icknield Street at Hockley in Birmingham in the county of Warwickshire.

Some history of the Great Western Inn 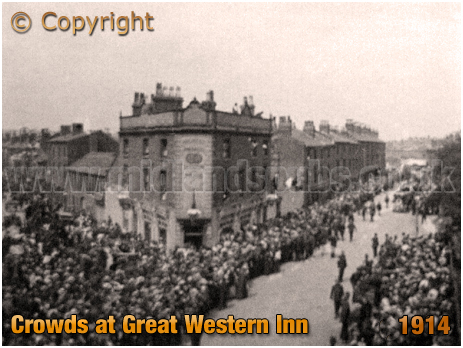 Displayed here are two photographs of the Great Western Inn when the streets were jam-packed with people lining the route for the funeral cortege of Joseph Chamberlain, the screw manufacturer turned statesman. Following a service at the Church of the Messiah in Broad Street, in July 1914, the cortege followed a route through the streets of Birmingham before his burial at Key Hill Cemetery, the main entrance to which was in Icknield Street, a short distance from the Great Western Inn.

The procession went along Broad Street, Easy Row and Parade. It was possibly planned to be conducted during the "dinner hour" so that workers could join the crowds lining the streets. The Birmingham Mail reported that "at certain points there were gatherings of enormous dimensions." The newspaper added that "the waiting crowd at the junction of Congreve Street and Great Charles Street was so dense that all tram and vehicular traffic was temporarily suspended, and that every point of vantage was utilised." The Mail reported that "the whole distance of the Parade to its junction with Camden Street, Newhall Hill, Edward Street, and George Street was densely lined with people, the pavements packed and the crowd spread back twenty deep." The journalist penned that "between deep rows of his sorrowing constituents, the dead body of the great statesman passed along the more important Icknield Street where men and women who, in other days, had cheered his progress to the echo, now stood with reverent men and sorrowing countenance.

I am not so sure that I would have been so reverent. This was a man who went from being a radical left-wing politician to somewhere near a far right extremist. His brilliance in improving the civic life of Birmingham through a daring borrowing programme was later blighted by his opposition to home rule and the 1870 Education Act, not to mention his championing of tariffs on free trade. Moreover, he led the way in an era of British Imperialism that would come back to haunt Britain and the Commonwealth, and continues to do so. As for the decline of the public house in Birmingham you can thank Chamberlain for that too.

More information on the Great Western Inn on Icknield Street to follow. 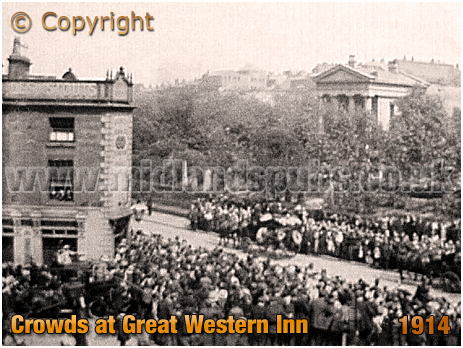 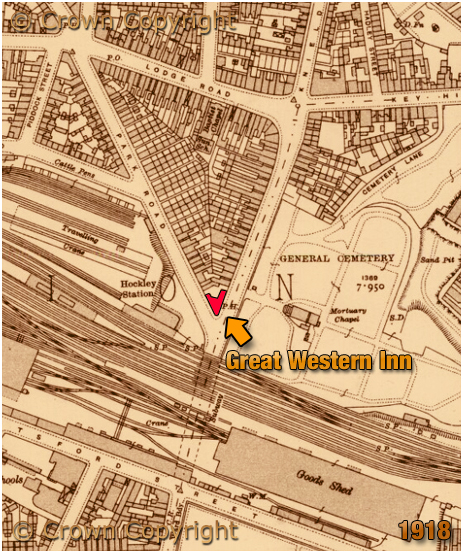 This map extract of a 1918 plan shows the location of the Great Western Inn on Icknield Street in 1918, with its relationship to the railway and cemetery.

If you have a genealogy story or query regarding the Great Western Inn you can contact me and I will post it here in addition to including your message within the website pages for Birmingham Genealogy.

"An inquest was held yesterday afternoon before the Borough Coroner, at the Great Western Inn, Icknield Street East, touching the death of Benjamin Turner [20], porter, in the employment of the Great Western Railway Company, Hockley Station. On Friday morning last the deceased was seen by a fellow workman standing on the deck of the goods shed at the above station, waiting for the arrival of some empty trucks. The workman went into a truck to remove an oil cask, and, looking round, saw the deceased lying motionless near to where the truck passed. He went to him and found him in a state of insensibility and apparently dreadfully injured. He went for Mr. Waterson, surgeon, but his assistance was of no avail, life being extinct. The man who was working near him at the time did not see him at the precise moment when the accident took place, and could not positively swear how his death was caused, but he strongly believed that he must have been standing near or crossing the rails, when he was caught between the buffers of the foremost advancing truck and the buffers of the stationary one. The Jury returned a verdict of "Accidental death."
"Fatal Accident at Hockley Station"
Birmingham Daily Post : April 4th 1865 Page 3