History and Information on Icknield Street in Hockley at Birmingham in the County of Warwickshire.

Some history of Icknield Street 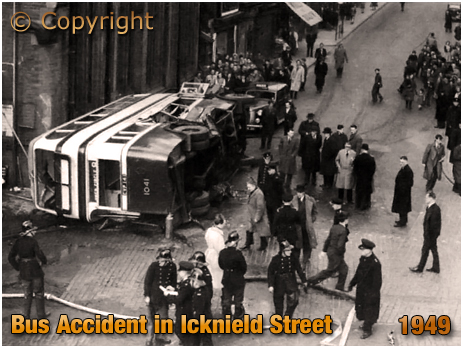 This serious accident took place in March 1949 when a fire engine crashed into a bus, toppling it over close to library at the junction of Icknield Street and Spring Hill. Setting off from the Albion Street Station, the fire engine was on the way to answer a chimney fire call. Derek Evans, of Bent Avenue in Quinton, died from the injuries he sustained in the collision. Helena Ellis, of Overdale Road in Harborne, received compound fractures of both legs and had to be moved from under the bus by the Accident Hospital mobile surgical team. The performed an operation at the scene of the accident. 34 people were hurt in the accident, including two of the firemen who were flung from the engine on impact. These were Station Officer George Bulmer and the driver Fireman John Brown. Both men suffered serious cuts with George Bulmer having severe facial injuries. Ernest Bywater, of Parliament Street in Aston, was the driver of the bus. The conductor was Gordon Smith. Both men suffered minor injuries.

I have plotted the locations of Icknield Street pubs on the map below. I only plotted the Red Lion on Warstone Lane to act as a reference because this is one of the very few pubs to survive in this locality. Please note that the Grand Turk at the 'top' of the street was a pub with a Hockley Hill address. The Warstone Inn and Acorn would be just off the map at the 'bottom' of Icknield Street but I did not have a corresponding sheet of the same scale to attach to this.

If you have a genealogy story or query regarding Icknield Street you can contact me and I will post it here in addition to including your message within the website pages for Birmingham Genealogy.

If you would like to share any further information on Icknield Street - perhaps you drank in one of the pubs in the past? Or maybe knew a previous publican running one of the boozers? Whatever the reason it would be great to hear of your stories or gossip. Simply send a message and I will post it here.

"At 10.50 p.m. last night a soldier was walking along Icknield Street towards Hockley Brook, and when at the junction of Park Road a motor lorry mounted the pavement and knocked him down with fatal consequences. The vehicle failed to stop and continued in the direction of Hockley Brook. The vehicle is described as a medium-size motor lorry, either dark blue or dark green in colour with a canvas over the top. Anyone able to give any information is asked to communicate with Superintendent Keech, at Kenyon Street Police Station."
"Fatal Accident in Icknield Street"
Birmingham Mail : October 16th 1943 Page 3