History and Information on Inge Street at Highgate in Birmingham in the County of Warwickshire.

Some history of Inge Street

If you have a genealogy story or query regarding Inge Street you can contact me and I will post it here in addition to including your message within the website pages for Birmingham Genealogy.

If you would like to share any further information on Inge Street - Whatever the reason it would be great to hear of your stories or gossip. Simply send a message and I will post it here.

"My great great great granddad, Dudley Hands was a baker in 12 Inge St in 1851 [We've been to visit the back-to-backs]. He was next door to a victualler Thomas Johns according to the 1851 census. The other side [number 13] was a provisions dealer. He lived in the house with his wife, 6 children, father-in-law and a journeyman baker. I see from the census that after number 14, another baker, the numbering goes to court 4 number 1, 2, 3, and 4, then number 15, then number 18 before going to Court 6. Could the pub be called the Buried Treasure?"
Teresa Matheson, Birmingham 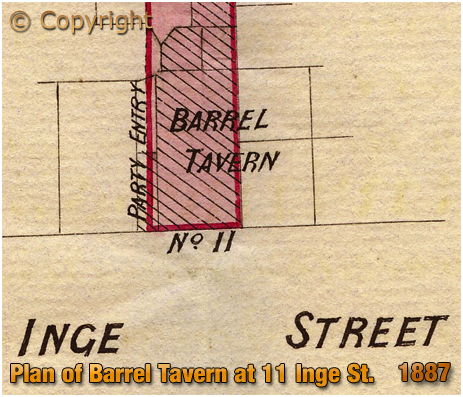 No.11 was a public-house called the Barrel Tavern. I note that Dudley Hands later plied his trade in West Bromwich before moving to Balsall Heath where he returned to the glass trade, an industry in which he was involved during his early career. However, his son Laurence continued to work as a baker.
Kieron.