History and Information on Islington Row in Edgbaston at Birmingham in the County of Warwickshire.

Some history of Islington Row

The meeting of five important routes, the junction now known as Five Ways was recorded in the mid-16th century. The locale became known as Islington and the earlier name of Broad Street was Islington. At the same time, Islington Row was being developed from the late 18th century on land belonging to the Rector of Birmingham and the Calthorpe Estate. 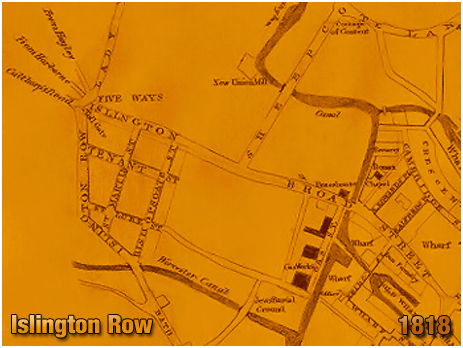 In the 19th century the name of Islington Row was only applied to the stretch of road between Five Ways and Bath Row. The section between Bath Row and Wheeley's Lane was formerly known as Bridge Street. This extract from Pye's Map in the 1818 'A Description of Modern Birmingham' suggests that the road continued into Bath Row before Bridge Street was laid out, creating a road junction with Bath Row. 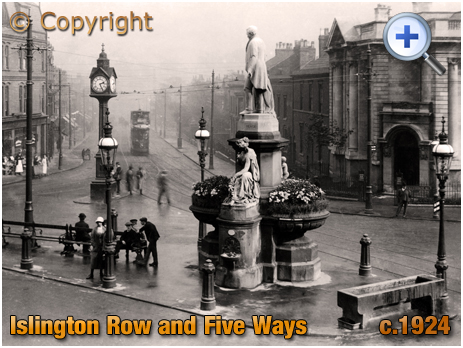 This view of Islington Row was captured from Five Ways in the mid-1920s. The photograph shows the Five Ways junction at Edgbaston with a tram trundling along Islington Row. The familiar sight of Lloyd's Bank can be seen on the right. Designed by Philip Boughton Chatwin, the bank was erected with Portland Stone between 1908-9. On the left was the National Provincial Bank, a building which had a stone displaying the boundary between Birmingham and Edgbaston.

Dominating the junction was the Joseph Sturge memorial, the statue being unveiled in 1862, three years after the death of the Quaker who founded the British and Foreign Anti-Slavery Society. He came to Birmingham in 1822 and went into business with his brother. However, he concentrated on public life and campaigned for Chartism, the rights of the working classes and pacifism. The work of the sculptor John Thomas, the statue was later moved to a site near the former Swallow Hotel.

The timepiece, known as the Five Ways Clock, was erected in honour of Dr. Birt Davies, the first coroner of the borough, a position he held for some thirty-six years. Allegedly, this extraordinary man, who never took a day off, presided over around 30,000 inquests. 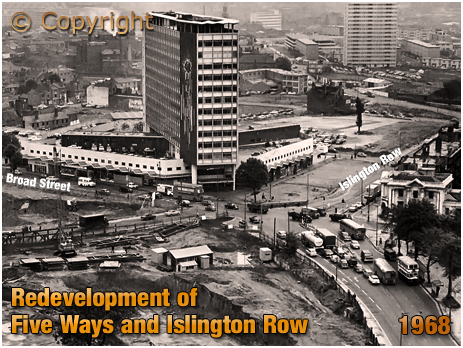 This is the view of the Five Ways Shopping Centre and Auchinleck House amid the large scale redevelopment of Islington Row and the traffic junction once overseen by Joseph Sturge. And all for the motor car! Whilst most European cities were upgrading their public transport networks, the UK was hell-bent on the destruction of huge swathes of land so that people could get around by car, the joke in this case being that it resulted in one huge traffic jam.

As you can see in the 1968 image [above], all of the properties on the north-eastern side of Islington Row were removed in order to create a wider road for Herbert Manzoni's mandate in which the "Car was King." The tower block was named after Field Marshall Sir Claude Auchinleck, a significant figure in Britain's dubious legacy within India and the Middle East. 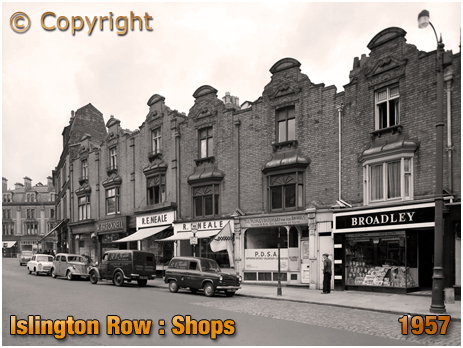 The Five Ways Shopping Centre was built behind this row of shops that fronted what was a narrower Islington Row. These properties, along with the rest of this side of the thoroughfare, were bulldozed in the late 1960s. Featuring Dutch Gables and elegant windows, these red-brick buildings formed part of a planned development that created a stylish, if rather homogeneous, shopping parade.

Many of the shops along this parade were well-established businesses and had been trading here for some years. 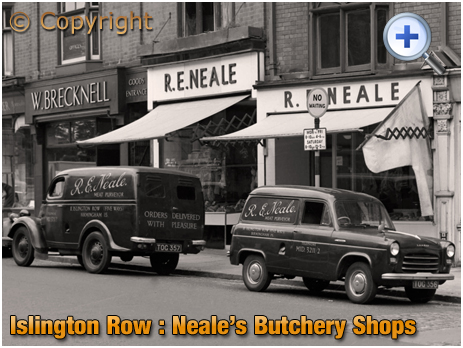 A woman is window dressing at Percy Whittaker's, a house-furnishings emporium. Next door was the shop of the house decorator W. Brecknell. The butchery business of Reginald Ernest Neale occupied two retail units at Nos.11 and 13 Islington Row. Two of the firm's vans can be seen parked outside, the older vehicle featuring the slogan 'Orders Delivered With Pleasure' painted on the back doors. The accommodation upstairs was not generally occupied by the people running the shops, though there were a few retailers who did. 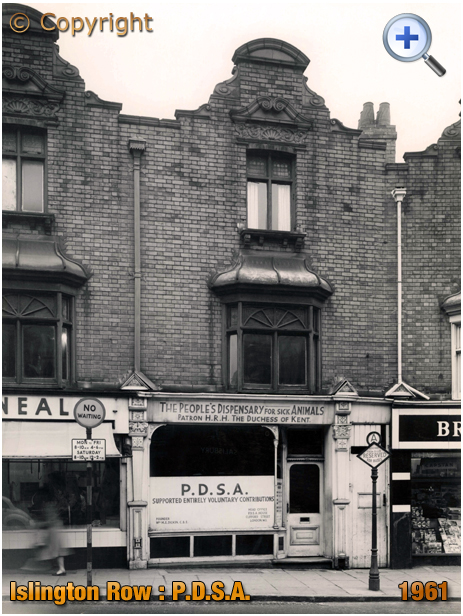 Next door to Reginald Neale's shop was the P.D.S.A. [People's Dispensary for Sick Animals] for Birmingham. This veterinary charity was established in 1917 by Maria Dickin. During the Second World War the P.D.S.A. also had dispensary's at 134a Soho Hill and 267 Lichfield Road at Aston.

During the Edwardian period this retail unit was occupied by the dress maker Albert Fazey. He would later trade in New Street where he specilised in fur coats made with Black Russian Musquash - the later use of the shop by the P.D.S.A. perhaps helped to compensate for the trade once conducted on the premises! At the time of this photograph Reginald and Frances Baker were living above the premises. 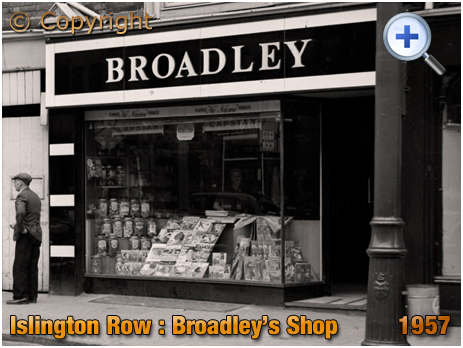 The next shop down from the P.D.S.A. in the mid-1950s was Broadley's, a tobacconist and newspaper retailer that also sold sweets and general items. This shop had traditionally operated as a book store with a printing business. During the Edwardian period Arthur Delacourt Woodhouse was the book seller occupying the premises. By the Second World War the shop was an outlet for the printing business of Arnold R. Martin & Co.

Broadley's shop can also be seen in another photograph [below] of this shopping parade on Islington Row. The image was captured on the same day in July 1957 but concentrated on businesses further down from Five Ways. 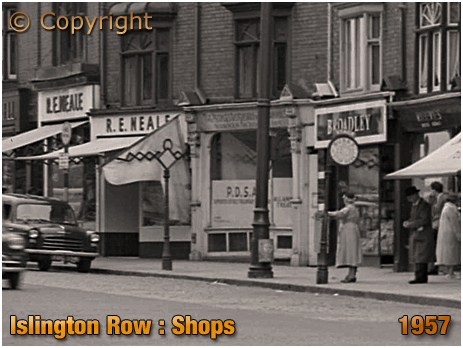 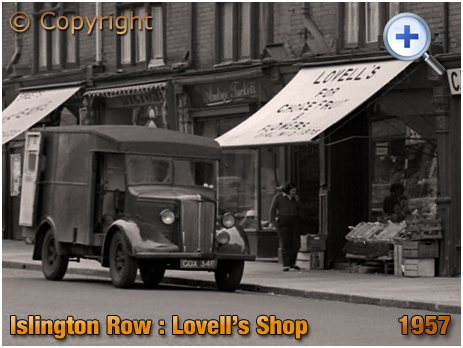 Behind the van is the shop of Arthur Joseph Wilton, who was listed as a leather goods manufacturer. The van was possibly associated with Lovell's, the blind for which states : "Lovell's for Choice Fruit and Flowers." Trading at No.27 Islington Row, Robert Lovell had been here for a good number of years. Living above the shop were Kenneth and Margaret Carruthers. 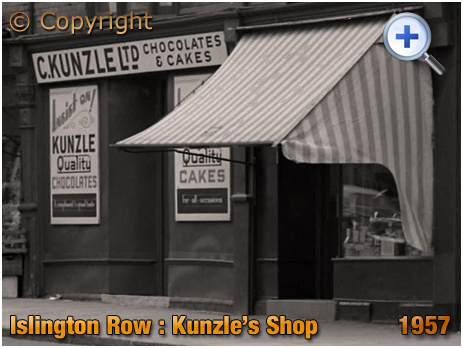 Next door to Lovell's there was a very famous name associated with Birmingham. The shop unit looks like a trade entrance to the Kunzle factory to the rear. The business was started by Christian Kunzle, a Swiss-born businessman and philanthropist who devoted much of his time and fortune to helping sick children. In 1935 he gave a chateau in the town of his birth for use as an Alpine Homes for sick people. Many children suffering from asthma and other lung complaints were sent to Switzerland for the clean mountain air, where the great majority of them showed improved health. Christian Kunzle also served as president of the Birmingham Children's Hospital. 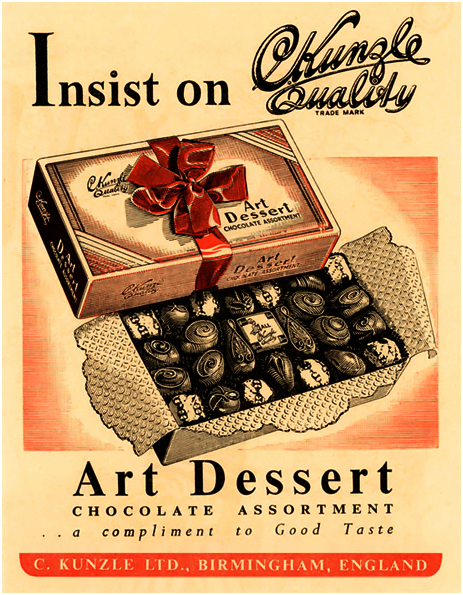 Christian Kunzle arrived in Britain during the late Victorian period, and built up one of the country-s largest confectionary and catering businesses. He was 17 when he went to work for his uncle, a pastry cook in Oxford. He learned his craft and went on to work in the kitchens at the Palace of Westminster. He later recollected that his milky rice puddings were favoured by the Prime Minister, Lord Salisbury. He later worked at the Grand Hotel in London. After seeking some financial assistance from Switzerland, he established his own enterprise in Birmingham, opening a modest bakehouse on Snow Hill which serviced his first shop located in the Midland Arcade. The business grew quickly and, from a new base here at Five Ways, his confectionary goods developed a widespread reputation. Helped by his son Ernest and grandson George, the company developed a chain of restaurants in the Midlands and London.

Christian Kunzle died at his Edgbaston home in January 1954. Six hundred people filled Edgbaston Old Church for the funeral service. I imagine that the redevelopment of Five Ways forced the move of the firm to the outskirts of Birmingham. In 1960 a new factory was built at Garretts Green and became a major employer in the newly-developed urban area. However, the firm was taken over by Fullers who, in turn, were bought out by Scribbans-Kemp four years later. Soon after this the business was acquired by Lyons. For some years Lyons produced some of the much-loved Kunzle brands, particularly the legendary Showboats. 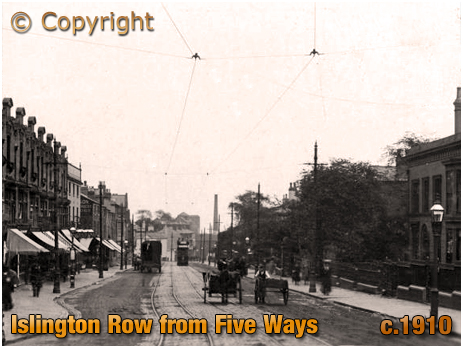 Many of the shops discussed can be seen here in an earlier photograph when the opposite side of Islington Row was largely occupied by large residential properties, though these are obscured by trees in this image. The larger building in the foreground is possibly the former Ladies School run by Mrs. Helen Phillip in the late Victorian period. Apart from Timothy George Watton, vicar of St. Jude's, during this period the houses were mainly occupied by surgeons, probably working in the nearby Children's Hospital. These included John Dewhurst Scurrah, Albert W. Gray and Alex Frederick Hawkins. 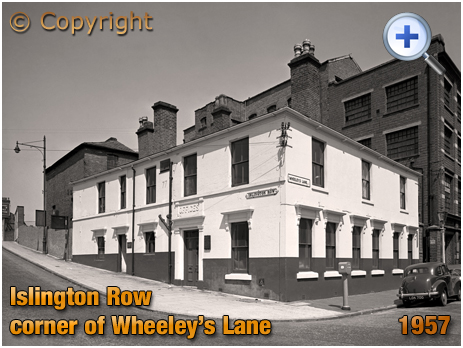 From Bath Row, crossing the railway line and canal, the next junction offering a road towards the centre of Birmingham is Wheeley's Lane. This view, captured in June 1957 shows the road sloping down from the bridge to the offices of W. Gill & Co. Ltd. on the corner of Wheeley's Lane. The firm were listed here as Electrical Engineers at the Pershore Works. I assume that the firm adapted the old Borough Flour Mills that stood here. The materials for this would have been transhipped from barges as the mill adjoined the canal. The mills were of some antiquity and formerly operated by Charles Lucy and Nephew. This business also operated a mill at Stratford-on-Avon and had premises in Great Bridge and Cannock. 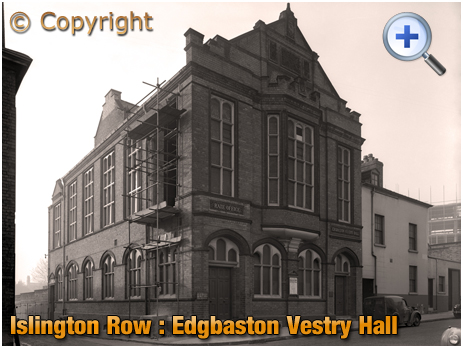 This photograph was taken on November 30th 1955 and shows the Edgbaston Vestry Hall and Rate Office that stood on the south-western side of Islington Row, on the corner of the narrow Enfield Road. Indeed, the earlier Vestry Hall was built in 1856 as a single-storey building in Enfield Road and has somehow survived whilst this large edifice was lost in the redevelopment of Islington Row. The building was used by a wide variety of clubs and societies and hosted popular dance nights. 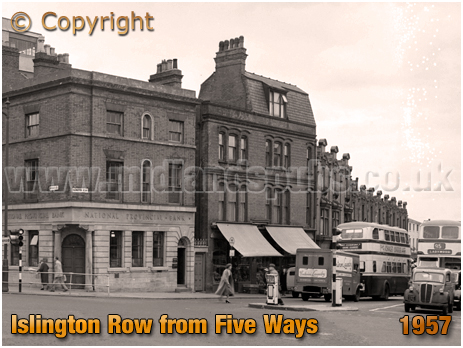 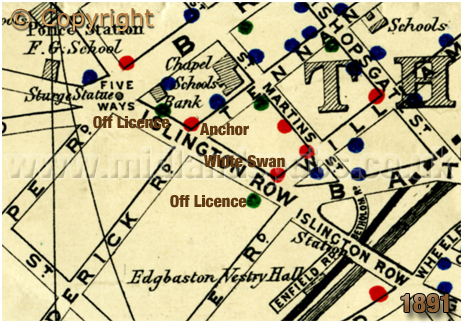 The map extract above shows the locations of the licensed houses in Islington Row in 1891. Reasonably accurate, the locations were roughly marked on the plan for the licensing justices of Birmingham. The map itself was drawn up by the city surveyor in June 1891. The red dots show fully licensed houses which, in 1891, numbered 653. Blue dots denoted beer houses, the total for which numbered 1,026. Green dots showed 499 off licences of various kinds. The total number of licensed houses was 2,178. I also have a similar map dated 1873, drawn up by the city surveyor William S. Till, which was used to plot the public houses of Birmingham in 1875 when there were many more beer houses.

If you have a genealogy story or query regarding Islington Row you can contact me and I will post it here in addition to including your message within the website pages for Birmingham Genealogy.

If you would like to share any further information on Islington Row - perhaps you drank in one of the pubs in the past? Or maybe knew a previous publican running one of the boozers? Whatever the reason it would be great to hear of your stories or gossip. Simply send a message and I will post it here.