History and Information on Jamaica Row in Birmingham in the County of Warwickshire.

Some history of Jamaica Row

Unlike London, Liverpool, Glasgow, Bristol and Lancaster, Birmingham's buildings and street names have few references to the slave trade. Research has, however, shown that the town's manufacturers profited from commerce connected with the trade. It may seem a little more benign but the trade in fruit, particularly in bananas, originated from plantations in which slaves were used to plant and harvest the crop. Jamaica Row was part of the main markets area of Birmingham and I cannot think of another reason for the name emerging here. The 'top end of Jamaica Row' is thought to have been called Black Boy Yard with the Black Boy being on Saint Martin's Lane. Some have linked this tavern name with that of Jamaica but the signboard can be traced back to the days of King Charles II. 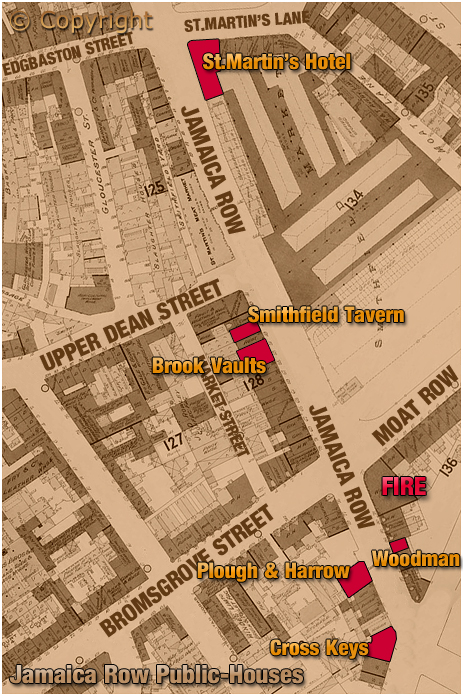 A continuation of Spiceal Street, the thoroughfare ran from the junction of Edgbaston Street and Saint Martin's Lane southwards to Cheapside and Sherlock Street. Well, that is in later years. It originally finished at Moat Row. The section of road between Moat Row and Cheapside was formerly known as Balsall Street. I have another detailed map of that section. On this plan I have marked many of the public-houses that fronted Jamaica Row, along with the site of a major fire in March 1906. The Black Boy formed part of the site of the St. Martin's Hotel and officially was listed in St. Martin's Lane. Incidentally, the public-house shown in the photograph below is the Farmers' Arms on Moat Row. 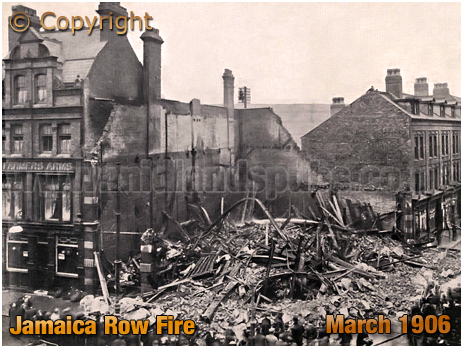 This newspaper article was printed in the Birmingham Mail on Saturday 24th March 1906, the day following the fire .... "For a city its size and of such varied industrial activity, Birmingham has of late years enjoyed rather remarkable immunity from extensive fires. The one which occurred last night in Jamaica Row, and which, though alarming, and astonishingly complete in destructiveness so far as it went, was happily confined to a comparatively small area, ranks among the biggest for some six or seven years past. That this gratifying circumstance is due very largely to the outstanding efficiency of our local fire-fighters there can be no doubt, although last night's outbreak will probably raise the question as to whether the strength of the brigade which Superintendent Tozer commands is adequate to the work which may at any time be imposed upon it. Every available man, it would seem, was drafted to the scene of operations, only one "sick" fireman being left to take charge of the station and attend to any fresh calls which might come in. As a matter of fact, two call were received, fortunately unimportant, but in one case men had actually to be sent from the fire in Jamaica Row, while in the other, men from sub-stations who had looked in at the Central Station on their way there, were called upon to deal with the new call. The public will be rather surprised, we fancy, to learn that Superintendent Tozer has only at hand at the Central Station some twenty-one officers and men, and that the total strength of 75, engaged in Jamaica Row last night, was only secured by all the sub-stations which are scattered through the city. That force, although adequate, was none too great to deal with the conflagration, and it is conceivable that, any time, the brigade may have a far more extensive outbreak to subdue. Indeed, it is practically certain that an emergency will arise, as time goes on, compared with which last night's conflagration will become almost insignificant. Then, possibly, the chief of the brigade will find himself seriously handicapped, and considerable avoidable loss of property may result. Despite the fact that the destruction of Messrs. Hyndman's premises cannot be ranked as amongst the most disastrous events in the fire annals of the city, there were certain factors in connection therewith which render the occurrence unique. In the first place there was the astonishingly rapid spread of the flames and their remarkable fury. Within a few minutes of the discovery of an unusual light in the second storey at the building, the whole block was blazing furiously, and the flames were surging through the gutted windows, leaping the somewhat narrow thoroughfare, and licking the fronts of the buildings opposite. Very soon the whole interior of the place was an inferno of roaring flame, raging so fiercely that any attempt at suppression was utterly futile. Ceilings, roof, and walls collapsed, one after the other, and in an incredibly short space of time nothing was left but a heap of tangled ruins of wooden beams, iron girders, and brick-work lying upon the ground. Why the destruction should have been so rapid no one can adequately explain, for the stock was of anything but an inflammable character. Most of the walls, it is said, were lined with matchboard, while iron girders, which are, of course, very susceptible to the action of heat, were freely used in the construction of the building, and there was also a strong wind blowing. But even taking these circumstances into account, the fury of the conflagration was remarkable. Another extraordinary circumstance which must strike everyone who views the ruins this morning, is the self-contained character of the outbreak. The block of buildings destroyed is cut out from those of each side of it as if some giant had been at work with a Brobdingnagian hatchet. The walls which flank the gaping space where the demolished building stood are strangely intact, scarce a brick displaced. This salvage of contiguous property is, of course, in the highest degree complimentary to the fire brigade, but it is none the less an astonishing circumstance, and one which, together with those others referred to, seems to make the outbreak notable." 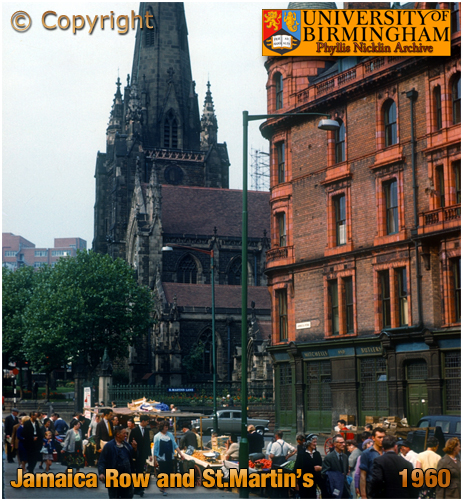 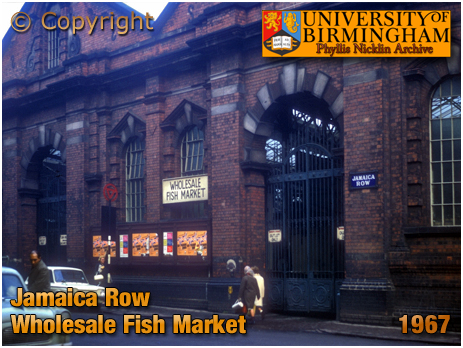 If you have a genealogy story or query regarding Jamaica Row you can contact me and I will post it here in addition to including your message within the website pages for Birmingham Genealogy.

If you would like to share any further information on Jamaica Row - perhaps your ancestors drank in one of the pubs in the past? Or maybe they knew a previous publican running one of the boozers? Whatever the reason it would be great to hear of your stories or gossip. Simply send a message and I will post it here.