History and Information on Livery Street at Birmingham in the County of Warwickshire.

Some history of Livery Street 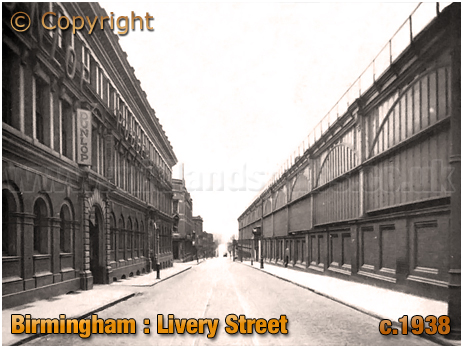 If you have a genealogy story or query regarding Livery Street you can contact me and I will post it here in addition to including your message within the website pages for Birmingham Genealogy.

If you would like to share any further information on Livery Street - perhaps you drank in one of the pubs in the past? Or maybe knew a previous publican running one of the boozers? Whatever the reason it would be great to hear of your stories or gossip. Simply send a message and I will post it here.

"An Inquest was held on Wednesday afternoon, at the Grand Turk Inn, Ludgate Hill, by Dr. Birt Davies, the Coroner, respecting the death of a child, six years of age, named George Bradbury, who resided with his parents at 30 Court, 6 house, Livery Street, and which, occurred in the painful manner stated here : About five to eleven on Saturday morning last, the mother of the deceased went out to get some potatoes for dinner, leaving her eldest daughter, aged ten, and another child aged three, in the house with the deceased, who was then sitting on an armchair. The eldest child, who gave her evidence in a very clear manner, stated that soon after her mother had gone out the two children, William and deceased, quarrelled, and fought. Immediately after the youngest child, William, got a piece of paper, which he lighted, and applied to the clothes of the deceased, which were instantly in a blaze. The witness, seeing this, tried to extinguish the flames, but could not succeed. The deceased then ran out into the yard, and a man, who lives next door, came and extinguished the flames by enveloping the child in a bag. The little girl stated that she was quite certain that her brother William set the deceased on fire on purpose. On finding that the child was severely burnt, a woman who came up took the deceased to the General Hospital. After the sister's evidence had been heard, the Coroner called the attention of the Jury to the fact that, though done intentionally, a child three years of age was not responsible for its actions. Mr. Bracey, house surgeon at the hospital, stated that the deceased was admitted into that Institution the same day. He was then severely burned upon nearly the whole surface of the body. He never rallied, and died on the same evening. He had since made a post-mortem examination of the body of the deceased, and gave his opinion that he died, from the effects of the burn, by congestion of the lungs. After the Coroner had summed up, the Jury returned a verdict of "Homicide by misadventure."
"Homicide in Livery Street"
Birmingham Journal : December 24th 1864 Page 8