History and Information on Meriden Street at Digbeth in Birmingham in the County of Warwickshire.

Some history of Meriden Street 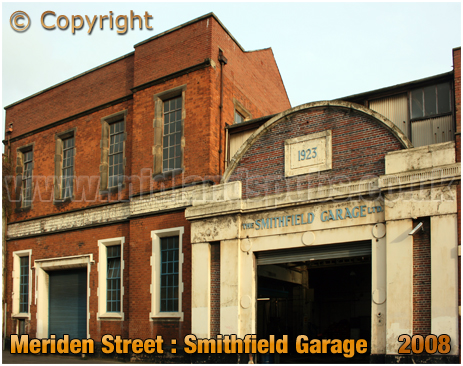 If you have a genealogy story or query regarding Meriden Street you can contact me and I will post it here in addition to including your message within the website pages for Birmingham Genealogy.

If you would like to share any further information on Meriden Street - Whatever the reason it would be great to hear of your stories or gossip. Simply send a message and I will post it here.

"At the Victoria Courts, this afternoon, before the Stipendiary [Mr. B. S. Foster], a young man named John Parkes, 9, Railway Terrace, Meriden Street, was charged with stealing 1cwt. of coal, the property of Thomas Hookham, coal merchant, of Bordesley Street. Evidence was given by Detective Barnes to the effect that Mr. Hookham had been losing coal from his carts as they passed through the Meriden Street district for some time, and had instructed his carters to keep a look out. This morning one of the carters, a man named Coates, complained to the witness that as he was taking a load of coal along Meriden Street five men surrounded the vehicle and took about a cwt. of coal. They ran away in the direction of Railway Terrace. Witness and Detective Bates went with the carter to a coffee-house in Meriden Street, where Coates picked prisoner out from among about a dozen men as the man who first approached the cart. Parkes was arrested, and on the way to the station assaulted both witness and the carter. He also observed to Coates, "You haven't heard the last of this. My pals will you in tonight when you take out your last load." He made similar remarks at the detective office, but made no reply to the charge. Prisoner was committed to the Sessions for trial. Detective Barnes said the Court had heard that prisoner had threatened the witness Coates. Mr. Carter [magistrates' clerk] said that if of any the prisoner's friends were in Court they could understand that if anything happened to the man Coates between now and the Sessions it would go very hard with the prisoner."
"Alleged Thefts in Meriden Street"
Birmingham Mail : January 17th 1911