History and Information on Monument Road in Ladywood at Birmingham in the County of Warwickshire.

Some history of Monument Road 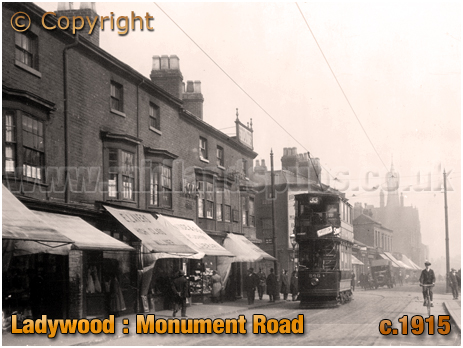 If you have a genealogy story or query regarding Monument Road you can contact me and I will post it here in addition to including your message within the website pages for Birmingham Genealogy.

If you would like to share any further information on Monument Road - perhaps you drank in one of the pubs in the past? Or maybe knew a previous publican running one of the boozers? Whatever the reason it would be great to hear of your stories or gossip. Simply send a message and I will post it here.

"William Patrick O'Sullivan [32], of Monument Road, Ladywood, was remanded in custody until Monday when he was charged at Alcester yesterday with assaulting Mrs. Edna Hallam with intent to ravish at her home in Sambourne Lane, Sambourne. Police Sergeant John Roberts said O'Sullivan called at Mrs. Hallam's home last Thursday and said his trousers had been torn by an accident on a cycle. He asked for a needle and thread to sew on some buttons. He suddenly attacked her, the sergeant said, but Mrs. Hallam escaped and the man ran across fields behind her home. Extensive police enquiries were made. and O'Sullivan was arrested at his home by Detective Sergeant Poole, of the Midland Crime Squad, on Wednesday. At the Birmingham Crime Squad headquarters, the sergeant said O'Sullivan made no reply when questioned. Later at Stratford-upon-Avon police station he was charged and replied, "I have told you the truth." Sergeant Roberts said O'Sullivan had made a statement."
"Man Accused of Attack on Woman in her Home"
Birmingham Daily Post : June 10th 1960 Page 30