History of the Turf Tavern in Monument Road at Brookfields in Birmingham in the county of Warwickshire.

Some history of the Turf Tavern

The Turf Tavern stood on the corner of Monument Road and Spring Hill. 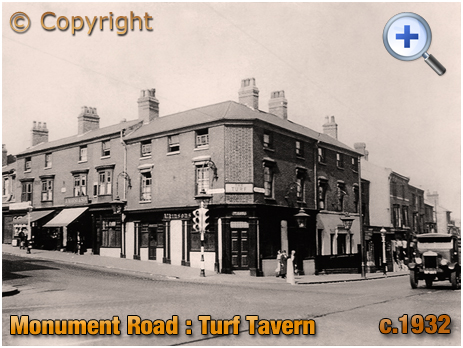 More information on the Turf Tavern to follow. I probably created the page as I had a link to Turf Tavern from another page. When building the site it is easier to place links as they crop up rather than go back later on. I realise this is frustrating if you were specifically looking for information on Turf Tavern. There is information on Birmingham dotted around the website - click here for a suitable starting place.

If you have a genealogy story or query regarding the Turf Tavern you can contact me and I will post it here in addition to including your message within the website pages for Birmingham Genealogy.

"Isaac Bickerstaff, 25, hinge maker, pleaded not guilty to stealing six yards of cloth, on the 4th of February, the property of James McDonald, a hawker. Mr. Markham prosecuted, and Mr. Buzzard defended prisoner. It appeared from the evidence that on the evening of the 4th February the prosecutor entered the Turf Tavern, where he had some dinner. As he was partaking of the meal the prisoner and three others entered; the prisoner taking a seat near the cloth, which the prosecutor, with an eye to business, endeavoured to sell. He got into conversation with the friends of the prisoner, and turning about to look for the cloth found that it had been taken away, and that the prisoner had also disappeared. On the 7th February prisoner went to the Detective Office, and said that he believed the police had been looking for him over some cloth, and that his master [Mr. Sadler] had told him to give himself up but that he knew nothing about it. For the defence, it transpired that the cloth was lying in bar for an hour and a half, and that many people had come into the house and had left the room during that period. The jury acquitted the prisoner."
"Robbery In A Public House"
Birmingham Daily Gazette : April 13th 1865 Page 6