History and Information on New Street in Birmingham in the County of Warwickshire.

Some history of New Street 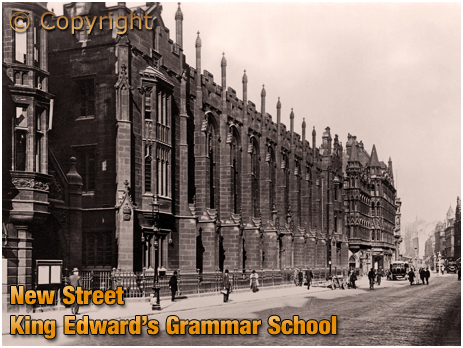 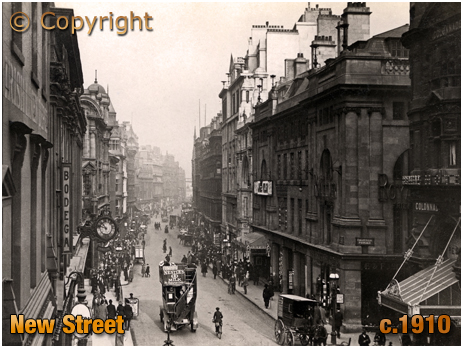 If you have a genealogy story or query regarding New Street you can contact me and I will post it here in addition to including your message within the website pages for Birmingham Genealogy.

If you would like to share any further information on New Street - perhaps you drank in one of the pubs in the past? Or maybe knew a previous publican running one of the boozers? Whatever the reason it would be great to hear of your stories or gossip. Simply send a message and I will post it here.

"About mid-day yesterday, as Miss Sneath, a young lady residing at Camp Hill, was passing along New Street, some dexterous manipulator in the light fingered line succeeded in relieving her of her purse, containing six or seven shillings."
"Pocket Picking in New Street"
Birmingham Daily Mail : December 8th 1857 Page 8.

"A respectably-dressed young man named Walter Ryland [21], clerk, was charged with being drunk and disorderly, and wilfully damaging the name plate on the door of the United Kingdom Alliance Society's office in New Street. The prisoner was acting up to the improper injunction "be merry and mischievous when you can," being actively engaged in the exciting amusement of pulling bell handles and doing his best to deface door knockers. "Night with him was the time for a spree," but unfortunately he fell into the hands of a policeman who took him to the cells of Moor Street. Fined 5s. and costs, in addition to which he was ordered to pay the damage."
"A Roystering Clerk"
Birmingham Daily Post : May 3rd 1871 Page 8.

"Ernest Charles Kay, an iron-founder of Great Barr, was summoned, at the instance of the London and North-Western Railway Company, for alighting from a train whilst in motion, at New Street Station. Mr. Soars appeared for the complainants and Mr. Rowlands for the defendant. A collector named Edwin Wicks proved that the defendant jumped out of a compartment before the train came to a standstill, and that the jumper had some difficulty in maintaining his equilibrium when he alighted on the platform. A cross-summons was preferred against this collector by Mr. Key for assaulting him. Several witnesses were called to show that he was roughly handled by Wicks. The charge against the collector was dismissed, and Mr. Key was fined 5s. and costs."
"Jumping From a Train While in Motion"
Birmingham Daily Mail : March 11th 1871 Page 6.