Some history of The Fordrough at West Heath, Northfield in Birmingham in Warwickshire

This public-house was located on the corner of Redhill Road and The Fordrough at West Heath. I am not sure if any parts of the fabric are still there - when the pub closed it was taken over by Tesco who enlarged the site into a convenience store.

Mitchell's and Butler's built the place which opened in 1953, according to a note in the brewery's annual general meeting of that year. 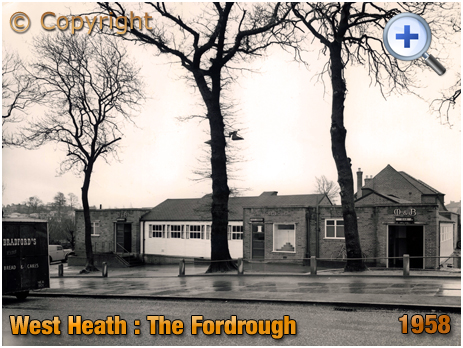 The Fordrough can be seen here in March 1958. A van from Bradford's Bakery can be seen to the left. The pub here was an awkward-looking building. I suspect that there was a temporary pub [the white section] which was subsequently added to. Certainly, Mitchell's and Butler's successfully applied for permission to add a family room to the building in July 1956. 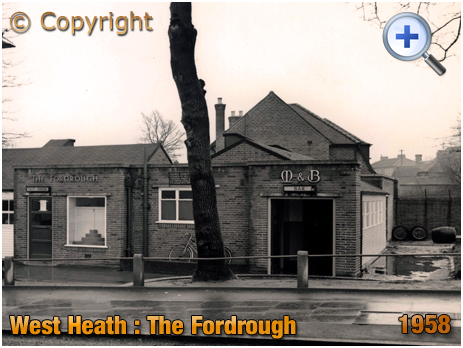 TBC
Note : this is not a complete list of licensees for this pub.

"A man today denied killing Birmingham dad Tracy McConnell during a fight outside a city pub. Jason D'Aguilar, aged 21, of Northfield, appeared at Birmingham Crown Court, where he pleaded not guilty to manslaughter. A trial date was set for November 17th but may change if an application by D'Aguilar's barrister, John Pini QC, to move the case out of the city is granted. Mr. McConnell, aged 46, died after suffering head injuries outside the Fordrough pub in West Heath on March 20th. He is said to have been acting as peacemaker in a brawl involving up to 20 people. Two other men denied charges of affray relating to the fighting which took place at the pub. They are the victim's nephew, Matthew McConnell, aged 26, of Longlands, West Heath, and 20-year-old Billy Casey, whose address was withheld by the court. All three defendants were released on bail."
"Northfield man denies killing city dad in Fordrough pub fight"
Birmingham Evening Mail : June 29th 2009