History of the Man On The Moon at West Heath in Birmingham in the county of Warwickshire.

Some history of the Man On The Moon

This public-house was originally known as the Man In The Moon but I have listed it as the Man On The Moon as it has traded for longer under this name. The name was changed to celebrate the moon landing of the Apollo Lunar Module Eagle on July 20th, 1969. The pub opened on October 15th, 1937 so it only traded for 32 years before the name was changed by Mitchell's and Butler's. 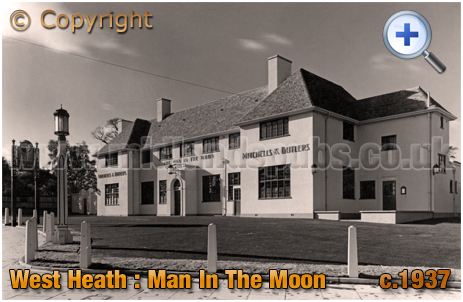 The Cape Hill brewery acquired the land in 1930, paying £2,000 to Misses Martha and Betsy Tibbatts. Residents of neighbouring West Dene, they both died before the new public-house was opened.

The application for a new licence at West Heath inevitably meant that Mitchell's and Butler's would have to surrender licences in the centre of Birmingham. Accordingly, the brewery relinquished the Three Tuns Inn on Digbeth, along with the Lamp, a beer house in Steward Street. The combined value of these licences was valued at £3,633 1s. 8d.

Mitchell's and Butler's commissioned the father-and-son architectural practice of Bateman & Bateman to design the Man In The Moon. The son, Charles Edward Bateman, was noted for a number of Arts and Crafts and Queen Anne-style houses and commercial buildings in and around Birmingham. He was responsible for the public library at Northfield.

The Man In The Moon was a managed house, the first couple to run the place was Franklin and Lily Worthington. They led a small team employed by the brewery who lived on the premises as part of the renumeration package. In 1939 these were Llewellyn Jones, Lilian Rowe, Lilian Bell and Sylvia Earp. Born in Doncaster, Franklin Worthington had previously worked on the railways. He married Lily Webster at Castleford in June 1929. She was the daughter of William Webster, publican of the Railway Hotel.

Franklin Worthington was publican throughout the Second World War but died in December 1949 at the Midland Nerve Hospital at Edgbaston. In January of 1950 the licence of the Man In The Moon was transferred to Harold Jones who put in a shift of just over a decade. 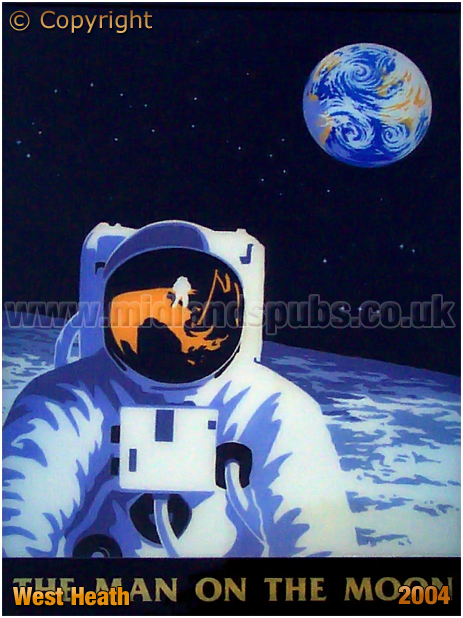 Reginald Geach was manager during the early-mid 1960s before handing over to Albert and Mary Plumpton. The couple had previously managed The Longbridge for M&B. They were running the Man In The Moon when the pub's name changed to the Man On The Moon. 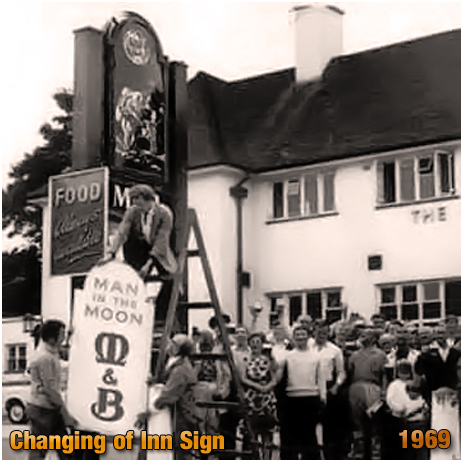 The moon landing was a big deal for the brewery and the name was changed one day before the lunar module landed in the Sea of Tranquility. The local press were all over the story with a local company headed by Alan Tisdale commissioned to design a new inn sign for the pub. The brewery hired Multi Broadcast at Acock's Green to install new-fangled top-of-the-range colour televisions so that customers could watch the launch, journey through space, along with the moon landing. The pub did such bumper trade throughout the Apollo 11 mission it was a wonder they did not run out of beer.

1969 was a great year for the pub. However, the following year was one of great sadness as Albert and Mary's 13 year-old daughter Lorainne was killed in a lightning strike when horse-riding. The scholar of Colmer's Farm School died when lightning struck her outside the stables of the Meadow Hill Riding School at King's Norton.

If you have a genealogy story or query regarding the Man On The Moon at West Heath you can contact me and I will post it here in addition to including your message within the website pages for Birmingham Genealogy.

"An innocent woman suffered a broken jaw during a pub brawl as she sat having a drink with friends. The bystander was enjoying a night out with friends at The Man On The Moon pub in Redditch Road, King's Norton, on Friday, February 15th. At around 11.15pm a large group of men and women became involved in the brawl in which glasses and chairs were thrown. During the altercation the 22-year-old woman was injured and suffered a fractured jaw requiring surgery at hospital. Detective Constable Paul Parsons, from Harborne CID, said: "A number of people were involved in this brawl and have yet to be spoken to by police."
"Woman suffers broken jaw after brawl breaks out in pub"
By Gary Young in Birmingham Evening Mail : March 9th 2013